For further details and discussion, see the talk page. (To see what is hot, see recent changes)
For Ukrainian events other than the week of regime change in Kiev, see Category:Ukraine 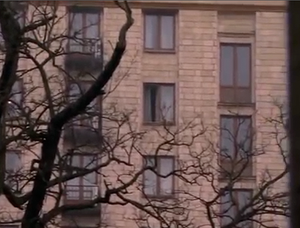 The window of the Hotel Ukraine from which, a BBC reporter said, shots were fired by a man "wearing one of the protesters' green helmets."

Although ACLOS is a wiki dedicated to events in Syria, we couldn't help but notice a very familiar pattern in the recent culmination of unrest in the Ukraine. Our research has led some contributors to believe that part of the reasons for escalation in Syria and other places have been snipers of unknown identity shooting at both protesters and police forces. And as also many of the other events examined on this wiki have two sides accusing each other of being responsible for despicable acts of this or the other kind, we couldn't help but take a closer look at the events of February 17th to 20th in Kiev, the capitol of Ukraine. Most of it can be found on the talk page at the moment, but some is already front page material if only to honour the victims.

The list of victims includes at least 67 insurgents and civilians and 11 police. 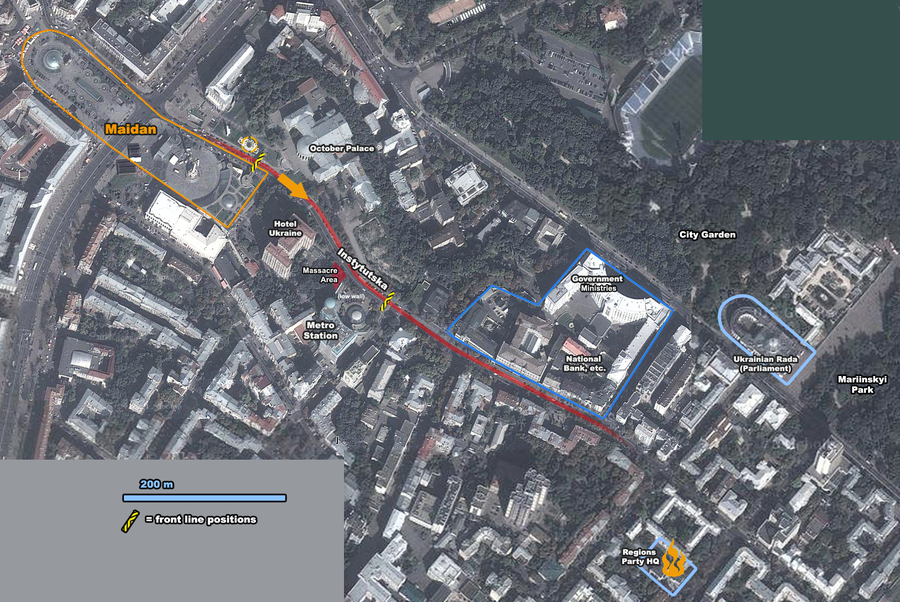 This broad area map shows the relevant locations for the pivotal events of February 20. The hotel Ukraine, generally insurgent-held, seems to be the origin of at least a majority, if not all, of the truly criminal and relentless firing on unarmed protester/insurgents. That occurred, video clarifies, in the red area at the map's center. There's no clear evidence ACLOS has found of peaceful protesters getting shot on the Maidan itself. Until it's settled enough to summarize here in full, evolving details on the area can be found in the talk page section Mapping the Events. Alleged shooting directions are mapped and considered in the sub-section Talk:Ukraine 2014#Shooting Directions.

This includes "Fort -500", a pump action smooth-bore shotgun of 12/76 mm caliber with manual reloading (listed on sale, Wikipedia, video), and catapults launching projectiles from a metal pipe with the help of a pyrotechnic charge.

Michael McFaul interview. Q: "Recently, Lavrov told his version - when they agreed, Putin called Obama and said, "So we pressed on him, they signed, now you have to put pressure on the opposition." In his logic, he imagined that someone could put pressure on the Maidan, although it was no longer possible. Yanukovych ran away at night . Lavrov said that "offended the president, that no one called back from Washington, and even did not say that they had tried to convince, but were not able to." At this point, it was sealed, and he had decided to take the Crimea".
A: "I agree, it was probably the moment when he decided to start this operation, and this is extremely important. Because many say he dreamed of this for a long time".

Statement of the International Advisory Panel on the occasion of the first anniversary of the beginning of the Euromaidan crisis on 30 November 2013. The panel, first convened in April, 2014, does not conduct its own investigations, officially. Instead, it reviews investigations of Maidan (and also Odessa) events, still conducted by Ukrainian authorities, to determine if they are up to European Human Rights standards. Whether or not the findings are true is another question that aren't necessarily mandated to address.

The statement explains the panel's composition:

The statement also explains how they gathered information, not for its own investigation which it doesn't do, but for some sort of reference purposes: soliciting government ministries, and taking an open call for NGOs to submit information. The panel notes a mixed and slow response from the ministries (stemming, they think, from a misunderstanding since resolved), and submissions from Ukrainian Human Rights groups (likely pro-government ones, including "the recently formed ‘Families of Heroes of Heaven’s Hundred’") as well as Human Rights Watch and Amnesty International. As for their view of the panel's historical role, they seem to acknowledge it is to ease and solidify the transition to a Europe-leaning new order whose moral basis has been built largely on their version of highly contestable crimes they alone are left to investigate:

The effective investigation of unlawful killings and serious ill-treatment is all the more crucial when those violent acts constitute a turning point in a State’s history, as they were in the case of the Maidan demonstrations. In such cases, investigations and prosecutions, bringing as they should truth and accountability, constitute an important means of ensuring a solid transition from that episode of violence to the next more positive chapter. This is, indeed a form of transitional justice. ... the International Advisory Panel (hopes to) make a lasting contribution to restoring public confidence and to bringing closure to both these unhappy chapters in Ukraine’s history.

The 100+ pages report of the panel, released on March 31, 2015, concludes that no significant progress has been made in the investigations and criticizes mostly Avakov's Ministry of the Interior, but also the security service, of an attitude that "has been unco-operative and, in certain respects, obstructive".

On October 12, homes of three members of "Freedom" party were searched on suspicion of their involvement in the shooting of "heavenly hundred" during the coup in Ukraine in the winter of 2013-2014.

This was announced on Twitter by "Freedom" deputy in Kievan Rada Alexander Aronets, who published a Kiev Pechersk district court warrant to search the homes of his colleagues.

The document says that during the pre-trial investigation a video emerged in which we see an open window in room 1132 on the 11th floor of the hotel "Ukraine", from which shots were fired at civilians and law enforcement officers on the Independence and Institutska the street.

It was found that Pankevich Oleg Igorevich (Freedom party) stayed in the room number 1131 during this period "- according to the court order. Rusvesna, 12.10.2015.

Feb 5, 2016. SBU reported to Poroshenko that they finally found weapons from which the heroes of Maidan were killed. 23 weapons were found, which were damaged mechanically, ID numbers sawed-off. After an examination, SBU identified 12 weapons. Gritsak said: "with high probability, those were fragments of 22 Kalashnikov (sub-machine) guns, one Kalashnikov (full) machine gun, and in addition one barrel, a twelve-gauge hunting shotgun"

July 23, 2016. Ukrainian Attorney General Lutsenko: the person who lead 'the black hundred' (meaning snipers) out of Kiev and drowned weapons in a lake, was with us on Maidan -112.ua, text and video (Russ. and Ukr.) (He keeps saying that 'according to our version' it was done on orders of Zakharchenko).

In late November 2017, the official investigations have been put on halt due to legal obstacles. They were to be transferred by the Prosecutor General’s Office to the State Investigation Bureau, alas lawmakers have failed to create such a bureau in time.

There's at least one decent photo-based study by a guy named Vorontsov, and other sources currently listed on the discussion page.

tvrain interview. He was a commander of Alpha battalion in the Donetsk region, and deployed on Maidan (currently commander of Vostok battalion, DPR, and DPR security chief). He with his group was at Trade Union building (he says 'that building), entering from the top and moving downstairs. Another group was supposed to move from ground level but was unable to. His group moved in with a motto 'we burn but we do not shoot back.' Battle order, man with a shield, followed by 1 or 2 men with pump gun; everybody else behind role was to extinguish fire; had weapons but were not using them. They found a door on the 7 floor locked, and some people on that floor trying to start a fire. They broke some glass, threw in some noise-producing police grenades, but were not able to fully open the door or to extinguish fire. Fire extinguishers were too small for the job; they made a water line from 8 floor but pressure was too low for firefighting. They noticed the fire on the 6 floor as well. Concluded there is no point to try moving down. Eventually, discovered that protesters brought in --as he say--corpses of pro-Maidan supporters killed elsewhere on Maidan. He says that there radio conversations were all recorded, but not made public. But recordings reporting fire starting on 2 floor (as he believes, fake reports), were published. Khodakovskii makes a point that there was more freedom/democracy before Maidan, and that current regime is build on lies. Tvrain is the only Russian channel broadcast to Ukraine, that was his reason to stop by for a 1 hour conversation on a broad range of topics. Believes that DPR/LPR will live in peace with Ukrainian people---but he is strongly opposed/strongly critical of the current regime in Kiev.

The fire was initially blamed on Right Sector (in Yanukovich regime days). Than Alpha was blamed for this fire. (Alpha is SBU anti-terrorist special operations unit)

Claim: back in 2012, Berezovskii had a Ukrainian dossier, predicting some/many/most of subsequent events in Ukraine....Komsomolskaia Pravda, 8.4.15-- Quoting his security man as a source.

Ukrainian journalist/media resource owner Dmitry Gordon, 112.ua (video), 25 Jan. 2018, essentially blames current elites for Maidan, but manages to present them as Russian agents of influence: ...you know, this is really terrible...It is terrible who invented Maidan, it is terrible how it was invented, it is terrible how people were shot, it is terrible how territory was lost, it is terrible how they behaved after that and continue to do so....Presenter: it is terrible that when you start to ask questions, they accuse of zrada, provocation, and so on...Gordon: (explains that it cannot be hidden forever especially with modern info technology)...People are testifying in court, Parubiy, he cannot refuse to answer the questions...Anatoliy Vladimirovich Mogilev...Yanukovich bodyguards...Yatseniuk...they all tell stories ... and the puzzle start to get assembled (solved)...and the puzzle is terrible... this is global treason of interests of Ukraine, which was done by old Russian agents of influence, who were here and continue to stay here in all bodies of power ...they are governing us as before...those who know all this, they start drinking

Also here and elsewhere, Absolutely all the data is there. Who fired, and where did they shoot, and who killed whom ... When everyone will know about this (and this is inevitable, since all the secret becomes clear), people will cry , ... (Noted: overall Gordon is a tricky journo hedging his bets; he has fair amount of anti-Putin, anti-Russia/Donbass, anti opposition block talking too, and he is not talking straight on any of those subjects)--Resup (talk) 05:20, 26 January 2018 (UTC)

Few more Gordon bits and still not all the way on audio here. Focuses on transgressions of Yanukovich, and mutes off when it comes to heavenly hundred story. Tells that he was himself a Maidan regular, for reasons of conviction, but moneys were involved to keep Maidan standing; mutes off whose money while hinting on the role of 'old guard' from Yanukovich side, unhappy with younger arrivals brought by his influential son, given undue powers.