30 May. DPR MOD warns on new Ukrainian provocations, says that previous ones were incompletely covered by OSCE (Eng.)

Ukraine is drafting around 4000 reserve officers, those under 43 years old who did not serve in the army before (this includes university graduates). The draft is for 18 months.

Plans to have a meeting in Normandy format, with OSCE participation, were announced by President of France Emmanuel Macron in a press conference with Putin. (Syria, hacking, media issues touched on as well).

29 May. Zaitsevo, near Gorlovka, shelled by Ukraine, 2 houses destroyed.

28 Ukraine failed to follow through on an agreement on separation of forces in Stanista Luganskaya.

27 May. 1 DPR soldier was killed; a civilian woman was wounded.

25 May. DPR Minsk negotiator announced that another attempt of separation of forces is scheduled on 28 May in Stanitsa Luganskaya, LPR.

LPR commander Vladimir Tsvyah, call name Combat, and his reconnaissance chief were killed on the front lines, according to a war correspondent A. Rogatkin.

24 May. A civilian, 64 years old woman, was wounded and later died in hospital when Ukraine attacked a coach station in Trudovskie, Petrovskii region, Donetsk. 3 civilians were wounded in total in that attack.

23 May. US assistance to Ukraine is cut to 1/3 of current level, from 667 204 mln USD (page 60); earlier reports suggested that assistance will be replaced by loans.

Another Ukrainian provocation is reported in Avdeevka. DPR says that it was shelled with MLRS from Vodyanoe, in order to blame DPR. A civilian was wounded.

Second anniversary of Mozgovoi death - report has notes from his diary (2014-2015, of anti-oligarchical sort), a poem he wrote, photos and videos.

22 May. Northern suburb of Donetsk was fired on by Ukraine with MLRS missiles

A woman was wounded by Ukrainian shelling in Yasinovataya

Avdeevka coke-chemical plant was shelled by Ukraine, around a hectare of territory was on fire

21 May. One DPR soldier was killed by Ukrainian shelling

20 May. Poroshenko sends a batch of "beautiful T-80 tanks" to the front line. Also, meets Merkel.

A marriage in DPR, soldier & an author/ war correspondent.

In the past day, 3 DPR soldiers were killed, 1 wounded.

Two civilians were wounded when Ukraine opened fire on a coach station in Trudovskoe, western Donetsk; by preliminary information, RPG was used.

Residential area of Makeevka was hit by Ukrainian fire, houses were damaged -report and photo

19 May. DPR MOD: In the past week, 324 ceasefire violations by Ukraine, 2146 mortar, tank, artillery shells and missiles fired. , 2 DPR soldiers and 2 civilians killed, 5 soldiers and 6 civilians wounded. (Rus)(Eng.) (Strelkov: 5 killed, Yasinovataya checkpoint, on 17 or 18 May).

DPR ombudsman, 6-18 May: 14 killed, including 13 soldiers and 1 civilian woman killed on 17 May in Krutaya balka (video); 42 were wounded including 25 soldiers, 8 civilian women, 9 civilian men, including 2 children.

LPR sit-reps, Eng (still no disengagement in Stanitsa Luganskaya as of 18 May, despite many past attempts).

18 May. "Arrested SBU saboteur" give details about killing of LPR commander "Baggi"; appears to have a written text below camera view but give many details and could be legit) . Cooperated in investigation experiments, giving many details, quickly.

17 May. Ukraine shelled DPR in the past day, after raising more accusations. 1 DPR soldier was killed, 2 wounded. (Eng.)(Rus.)

Document on EU visa liberalisation with Ukraine is signed

13 May. Ukrainian-controlled Avdeevka residential area was shelled, and 4 civilians were killed. Ukraine accused Novorossian fighters (Zhebrivskii)(112.ua)(glavkom.ua, with photos). DPR : 'This is another provocation, on orders of OG "Donetsk" commander with the involvement of the 72nd separate mechanized brigade, the Right Sector *, the National Guard of Ukraine, as well as foreign media, staged before Minsk'. - The 72nd brigade shoots on the positions of the DPR, the "Right Sector" shoots on Avdeevka, foreign media reports this." Opolchenie correspondent 'Krik' gives angry, emotional account close to DPR version of events, mentions a mortar strike by Right Sector (timed by VK 5:07 pm).

Basurin, posted on 14:10 local (Eng. transl.),(video): in the past day, 1 DPR soldier killed and 1 wounded. More shelling and provocations expected, prior to a contact group meeting in Minsk on May 15.

13 May In Krivoy Rog and ex-Dneprodzerzhinsk (now Kamenskoe), Dnepropetrovsk region of Ukraine, the radicals set fire to the offices of the "Opposition block" (Rusvesna),(112.ua: no victims, no suspects).

12 May DPR MOD: In the past week, 331 ceasefire violations by Ukraine, 2122 artillery, mortar and tank shells fired. 3 DPR soldiers were killed and 3 wounded. 7 civilians were wounded. (Rus.), (Eng.)

LPR: In the past week, 47 ceasefire violations by Ukraine, 996 artillery and mortar shells fired (Rus.)(Eng).

UAF: In the past day, two Ukrainian servicemen were killed in action yesterday, and six more were wounded ... One of the killed troops was an engineer who was demining an area, and the rest came under hostile fire.

Ukrainian documentary investigation of Sheremet murder (20 July '16 news) appeared, claiming that an SBU man was seen near his home on the night of the murder; SBU spokeswoman Elena Gitlianskaya after movie release stated that this person was fired or left SBU on 29 Apr. 2014. More on Sheremet and talk pages.

Approval of visa-free regime for Ukraine keeps moving on, expected to be in place this June.

10 May. A woman and a girl wounded by UAF shelling in Kuibyshev district of Donetsk; woman refused hospitalization, the girl hospitalized -DAN news (Eng). One DPR soldier was killed and one wounded.

1 UAF soldier was killed and 4 wounded.

After a clash yesterday, another bloody clash between 30-40 Banderas and some 8 Afghanistan vets in their office in Nikolaev 1,2. 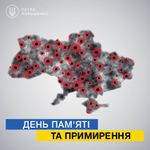 8 May. DPR. Civilian woman is wounded by Ukrainian shelling in Zaitsevo, near Gorlovka -DAN news.

On the eve of the traditionally revered 9 May WW2 Victory Day celebrations (photo report), two fragmentation-type munitions were placed on a rode to Saur-Mogila memorial site, one of them exploded. No injuries or deaths reported. Zakharchenko blames Kiev. It is claimed that munitions were set on a timer and one exploded before Zakharchenko was about to travel the road for the celebrations. It is said that more timed charges were discovered after search. Presumed photos appeared (Timer-Odessa); Rusvesna has stock photos. 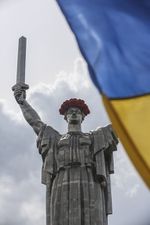 Poroshenko chutzpah attempt to link the so called 'ATO', results of which are covered here, with WW2 day of remembrance, showing himself and some ATO veterans in the background of Soviet WW2 memorial, despite being quite the opposite in that context. (Below: state emblem of the Soviet Union covered by Ukrainian and EU flags for the sake of presentation). Kiev plans to switch to 8 May holiday, aligning with the Western V-Day, instead of the traditional 9 May holiday in USSR/Russia; the move was criticized in Russia.

Odessa. Vandals destroyed avenue of birches in memory of victims on May 2, 2014 , destroyed Zhukov memorial --Timer-Odessa.

5 May. DPR MOD: in the past week, 339 ceasefire violations by Ukraine, 1788 banned by Minsk agreement missiles, artillery and mortar shells, tank shells were fired. 1 DPR soldier was skilled and 3 wounded. 1 civilian was killed and 5 wounded. (Eng.)(Rus.)

A document emerged in social media appearing to show a response of Ukrainian presidential administration official, telling that Minsk agreements are not legally binding and based on goodwill (TASS).

According to Ukrainian official sources, Russian ships 'attempted to capture' Ukrainian vessel, ordering it to 'stop and lay in drift' (застопорить ход и лечь в дрейф), (Rusvesna)(112.ua). That happened near Crimea where territorial waters may be disputed; Ukrainian sources make a point of the vessel response that it was in Ukrainian waters, while Russians believed it briefly entered Russian territory. Eventually the vessel continued on his way to Skadovsk. It is said that vessel crew will receive rewards, for what (if not accidental) could be a provocation with tragic consequences.

4 May. Radio Svoboda published a video of OSCE car explosion (see news, 23 Apr.) Rusvesna: who filmed it, and why? (geolocating camera on Ukrainian territory, and making a case that it is filmed by a high-res camera from Ukrainian fire correction mast). A user claim but no primary evidence that this is OSCE camera. Rusvesna: OSCE cameras display technical info, time, etc, and attribution. LPR blames Ukraine for the attack.

2 May. Odessa massacre anniversary. Most of Kulikovo field is blocked by police, people bring flowers to the Trade Union house. Reports and photos: Timer-Odessa; Rusvesna; Cassad