31.8 Kiev. Rada approved in the first reading a decentralization law. After that, is is reported that protesters, carrying 'Svoboda' and 'Right Sector' banners, are trying to storm the Rada building and fighting the police (RT), (Rusvesna). A live grenade was thrown into police; 125 were injured, and two national guard soldiers were killed. According to Avakov, a member of the special MOI battalion "Sich" and Svoboda party member is believed to be the perpetrator, he and about 30 others were arrested.

29.8 Hollande. Merkel, Putin had phone conversations. A new meeting of Normandy 4 leaders is planned; -the date is not set yet. Elections, fulfillment of Minsk were discussed. Full ceasefire from September 1 was supported [1]

News Front video. One Ukrainian POW from Gorlovka decided to stay... Ruban taking part in exchange on Ukrainian side, Kononov for NOvorossia. Tells them not to come back with weapons, they are giving one chance.

In the meantime, the contact group expressed a shared desire to cease hostilities by September 1.

26.8 UAF once again renewed shelling of DPR/LPR cities, and used banned by Minsk agreement heavy artillery against Alexandrovka and Marinka, and shelled other towns, including tank fire directly hitting a civilian multi-storey house in Donetsk. Basurin issued another warning that Ukraine is seeking to restart hostilities, as well as disrupt peaceful life in the republics. Appeals to UAF not to follow criminal orders, not to support aggressive policies of Kiev; and an appeal to international community "to stop criminal actions of Poroshenko, who is seeking to start a new conflict in the East of Europe, and to drench Donbas in blood" DNR Online, 26.8.2015

22.8 As a result of largely accidental clash, a small group of opolchenie took a settlment of Mikhailovka and a train station Marievka (map) in LPR. Opolchenie has 2 KIA. Details are expected tomorrow, current update by Rusvesna. 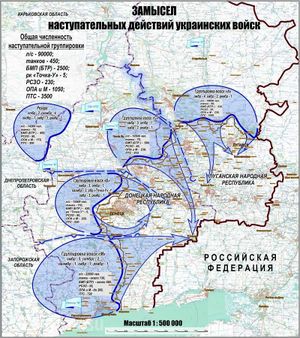 20.8 Assistant commander of the DPR armed forces Eduard Basurin: we received from UAF headquarters a plan of their attack (forwarded by some officer(s) against the war), a blitzkrieg starting in Mariupol and Debaltsevo, ending with Donetsk surrounded [2] In the meantime, shelling of Donetsk resumed, there are wounded civilians.

Heads of local LPR administrations of Slavianoserbsk (Славяносербск), settlement of Metalist, and Veselaia Gora (Веселая Гора) appeal to the Normandy-4 and OSCE. They say that Ukraine is not following Minsk agreement and recently shelling became more intense. They say that there desire is to leave in peace and to follow their own culture, language and traditions. They ask Normandy-4 and OSCE:

rusvesna-text (russian) and video (with the same text read)

19.8.15 Meeting of experts in the Normandy-4 format is expected on 20.8. According to diplomatic sources, Russian side participants are: Director of the Legal Department of the Russian Foreign Ministry Alexey Dronov and deputy permanent representative of the Russian Federation to the OSCE, Andrey Rudenko [3]

Basurin: the concentration of so many proscribed weapons directly violating Minsk Agreement demonstrates the preparation of Kiev for a new phase of large-scale fighting. "We call on the international community to urgently take the necessary measures to prevent the inhuman and criminal intentions of Petro Poroshenko to unleash a new round of fighting and the genocide in Eastern Europe. Fire of another war in Europe is still possible to prevent ."

Zakharchenko: about 82 battalion tactical groups of UAF are deployed against us, that's about 65 thousand people. Their front lines are deployed in attacking formation, so there is no reason to believe it will all end in peace. Minsk agreements are broken. We have a lot of work to do: we have to win, we have to built our state, and make sure that life of our people is decent.

DPR suggested to OSCE a three step plan, (1) verification of withdrawal of weapons of 120 mm and over (as DPR is still shelled from Grads), (2) observing, recording night-time shelling, with trips to the spot, affirmation of shelling incidents, and operative influence on the situation with phone calls to stop the shelling (3) increasing efforts to sign the agreement on under 100 mm weapons withdrawal

Sartana (near Mariupol, and a place of earlier provocations) was shelled in the evening of 16.8. OSCE SMM concluded that the fire was from the East, with 120 or 152 mm artillery. Two residents were killed, 6 wounded. Zakharchenko stated that this could be done by Ukrainian forces, from their side of separation line. He also stated that remaining DPR weapons could not reach Sartana. DAN News, 19.8.15, OSCE SMM report, issued 18.8.15.

15.8.15 Two powerful explosions are reported (again) in the area of the chemical/ammunition factory in Donetsk

13.8.15 At 22:05, Ukrainian artillery, "from their positions in Mariupol suburbs, Talakovka, Orlovskoe", started to shell civilian areas on the separation line. Sahanka-Shirokino area was shelled from Vostochnoe in Mariupol and Talakovka. After that, UAF checkpoint in Orlovskoe (on the border of Volnovakha and Mariupol regions) "suddenly exploded". The reason was not explained. An Ukrainian volunteer described chaotic scenes and 'everything on fire"; commented that Ukrainian servicemen received their salary yesterday -report

It is said that Ukraine is attacking a village Styla, to the South from Donetsk. -Little information at this time.

10.8.15 Ukrainian correspondent reports Ukraine attacking for the first time since February. In reality, advanced on a neutral village Novolaspa, breaking Minsk accord - report. Opolchenie is said to counter-attack and reverse this; 3 Right Sector and 1 UAF soldiers reported killed.

It is said that, following a recent clash, Kiev notified OSCE on their intent to return the artillery back to counter NAF ; and that Poroshenko asked for an urgent Normandy 4 meeting. (This is not on Poroshenko site, at this time)

Said to be reconnaissance by fire by Ukraine, hysterical reaction when NAF fought them back
Cassad photo report. Copies but unable to confirm a report in social media that a list of Novorossia supporters--- who should be allowed to pass the checkpoint easily-- was captured by Ukraine; terror against those Novorossia supporters by Ukraine is feared.

Donetsk was shelled for over 12 hours, buildings were damaged. 5 houses destroyed in Gorlovka

A lot of shelling of Gorlovka throughout the day. Shelling of Donetsk also reported. 9.55 am local, Mariupol: Intermittent fighting with heavy weapons in the area of Sartana-Talakovka (nearby Shirokino); opolchenie denied that they are attacking, anywhere. News front gives a detailed report by hour. Civilian deaths reported (Gorlovka and Zaitsevo). Video news report (click on cc and select English in settings).

8.8.15 It is said that Ukraine attempted to break DPR defenses near Gorlovka and suffered heavy casualties

Plotniskii: " We should prepare, that if it can be done peacefully, by Minsk negotiations, to resolve the issues, so that blood of our soldiers is not spilled,--good then; and if not, then talking will be done by tanks and all that"

Report: on August 8, a firefight took place near Granitnoe village between Ukrainian UAF and Right Sector units; leaving some 30 killed and 20 wounded

7.8.15 Donetsk under heavy fire by Ukrainian artillery overnight, some buildings on fire, electricity and water supply problems. Ukrainian howitzers and MLRS were moved towards Gorlovka, according to Novorossia reconnaissance reports.

5.8.15 Donetsk was shelled by UAF from Peski. Also, Ukrainian RSG fired three mortar shells from Artem and Bogdan Khmelnitskii st. intersection in Donetsk in the direction of city center. A shell landed in a flat on Kremlevskii prospect; a woman was killed. Another report, first recording Ukrainian shelling of Oktiabrskii district of Donetsk from Peski (tank fire and Vasilek), filmed from an opolchenie position. Opolchenie fires back using mortars. Later, a civilian house destroyed by Ukrainian fire is shown, and residents interviewed. Lost the house and all belongings; a child was shell-shocked. Ukrainian media will present all this as violations by opolchenie. Reality is that Ukaine is shelling civilians, and opolchenie tries to suppress Ukrainian firing positions.

Minsk- under 100 mm weapons withdrawal negotiations: the document is ready, but differences remain regarding several hot-spots. Opolchenie wants withdrawal in those areas first, because this is where the problem is. But Ukraine wants to do it last (claiming they are being attacked there apparently). Opolchenie suspects that Ukraine will try to gain more area in problem spots so that they can continue shelling Donetsk, despite announced withdrawal- rusvesna quoting Deinego.

4.8.15 In Minsk, security group meets today, but no show by Ukraine for the political one (dan-news).

An industrial giant - Novokramatorsk Engineering Works in Kramatorsk, Ukraine has signed a major contract with the Russian company "Metalloinvest". The Kramatorsk company will make conveyors, crushing and transfer points, as well as the know-how of the plant - steeply inclined conveyor, for the Mikhailovsky mining works, in the Kursk region of Russia. (Kramatorsk was left by Strelkov and Khmuryi on July 5, 2014) - Summary of rusvesna report, 4.8.15.

3.8.15 Gorlovka was shelled for several hours by UAF mortars and artillery. At around 22:00, near Svetlodar power station, ammunition explosion occurred at the UAF artillery position and lasted tens of minutes rusvesna report

Vladimir Markov was arrested in Italy and is fighting extradition to Ukraine. According to Oleg Tsarev, he has not been under an international arrest warrant, and his crime is being involved in a brawl, and the statute of limitations has already expired so he should not be arrested even in Ukraine.

Contact group meeting ended in Minsk, said to be continued by Skype. THe meeting was expected to finalize demilitarization of Shirokino, withdrawal iof under -100 mm weapons, and discuss political issues. Informal reports suggest that Ukrainian participants appeared to leave early/quickly. There are reports of upsurge in shelling of Gorlovka and Donetsk by UAF.

Earlier reports indicate that in recent days headquarters of 34 UAF battalion and an ammunition storage was hit near Gorlovka.

1.8.15 In the run-up to the next Minsk meetings (3 August), increased shelling by UAF and attempts to blame opolchenie for this were reported, starting July 27. Reports on shelling of Gorlovka and Donetsk by UAF come every day. 47 violations were reported in DPR on 31 of July.

Rusvesna article reports that the US ambassador to Ukraine Geoffrey Pyatt will have his next meeting with the governor of pro-Kiev part of Donetsk region Pavel Zhebrovskii in the city of Donetsk. (And wearing Shaktersk footbal club colored tie...) Sounds quite incredible...Hope they are planning to come there invited (that is not clear-cut actually)....