Apr.4, 2016 It is said that fighters, said to be 'Al-Nusra', launched a big attack to the North/North East from Aleppo. About 400 fighters, several tanks and MLRS, according to report. 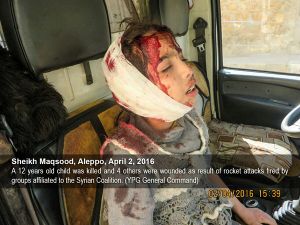 Two grim photo and video reports (+ this which refers to 'Damascus online' journal) on civilian situation in Aleppo city on Rusvesna. Seems to be of unclear origin (somewhat--Rusvesna is typically sensible), some photos are present on social media, others are not. Planned as part of twitter campaign #savealeppo .

Two of Rusvesna photos appeared earlier on Kurdish twitter and apparently @ConflictNews (here is a reference) on 21 February 2016, with explanation: victims of shelling of Ahrar/Nusra on Sheikh Maqsoud Aleppo. 6 civilians died, many wounded
Another photo is apparently from April 2, location said to be Sheikh Maqsoud, Aleppo, see on the right.

Apr. 5, 2016 Syrian army and allies made an announcement making the other side, Al Nusra, responsible for broken ceasefire and announcing plans to storm Aleppo. Asks civilians to leave in 48 hours.

Syrian army plane was shot down

Apr.6, 2016 Rusvesna reports a fresh attack by about 400 al Nusra fighters in Sheikh Maqsoud area, Aleppo city; "tens" of civilians said to be brought to local hospitals. While in the past day Kurds reported (part 1) (part 2) 11 civilians killed and 38 injured

Added: There is another Kurdish post added, addressed to the Special Coordination Team For Syria Ceasefire, dated Apr 5 at 7 p.m. It has two videos from twitter posts already linked above, and more wounded civilians photos.

Apr.7. It is said today in the afternoon Al Nusra launched an attack on SAA in a village Khandarat, near Aleppo, using 15 pickup trucks with mounted machine guns, and several tanks providing cover. Rusvesna report includes photos published on social media by the militants

Rusvesna post repeats the SAA announcement from April 5, above. Translating here main part of that SAA announcment: "Al Nusra misled other factions and led them into massive violation of ceasefire, extending their actions to Northern and Western areas of Aleppo province, and ignoring interests of Syrian citizen in those areas. SAA tried to avoid resumption of bloodshed, but now it became obvious to everybody that Al Nusra and those supporting it do not understand any other language, as was expected and well known. Based on the foregoing, the Syrian army and its allies will ensure that in the very near future, fighting on all fronts in the north, west and south of the province will be resumed, and this time there is nothing which can put an obstacle in doing so. In that regard, SAA special strike forces in the coming days will start fierce fighting with anyone who has violated the ceasefire agreement". Continues with asking civilians to leave the war zone as soon as possible.

'Rebels seize more territory from ISIS along the Turkish border'

It is claimed that US planes and Turkish artillery supported the offensive near Al Rai, Turkish border. Social media photo , video posts suggest that A10 planes participated.

Rusvesna: 'Al-Nusra is storming a residential quarter in Aleppo'

Report of the Russian Centre for reconciliation of opposing sides in the Syrian Arab Republic (April 9, 2016). Violations, civilians killed.

The truce has held in most of Syria, except in the north, where it has practically collapsed. Al-Nusra Front, excluded from the agreement, is deeply rooted in the parts of northern Syria controlled by opposition forces, complicating the oversight of the truce.

According to Russian sources reports, on April 27 2016 FSA broken ceasefire and attacked Kurdish positions. At least 83 "Turkish supported terrorists" were killed in clashes, and significant quantities of weapons captured--report and photos . Meanwhile, MSM media reports that a hospital was hit

The UN says the situation in Syria's city of Aleppo is catastrophic, after dozens of people were killed in attacks on targets including a hospital. Air strikes on and around the Medecins sans Frontieres-backed al-Qud hospital killed at least 27 people, while more than 30 died in other attacks

April 28, 2016 Russian sources accused opposition in shelling of residential areas of Aleppo. Some mortar shells hit the Russian consulate in Aleppo; it is said that 30 people elsewhere in the city were killed and over 100 wounded. Videos in the report show cars damaged by shrapnel or destroyed, and blood on a staircase of a building.

Meanwhile, Russian and US military negotiated a 'day of calm' to start 00.00 on April 30. Reports on what is included and how long it will last differ, but in the Russian version, "areas in Aleppo, Damascus. Latakia" are included, and there is no termination date for the calm. Western reports say that there is nothing on Aleppo, and that this is for one day.

Updated Russian report clarifies that Aleppo was not included in the Syrian army announcement, but representatives of 16 settlements in Aleppo province contacted the Russian center to join the ceasefire. 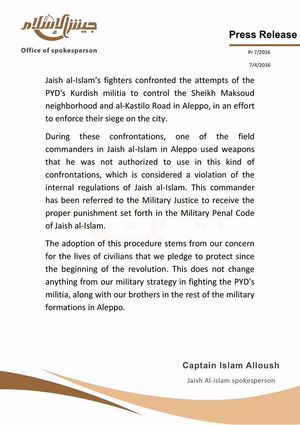 (for the timing/context, see above)

QUESTION: What about the reports that Jaysh al-Islam was involved, who have taken responsibility for this, and they’re one of the parties that have a delegation in the intra-Syrian talks?

MR TONER: Yeah, and I apologize. I just don’t have any information on that at this point. I’d have to look into it.

So far, little discussion, or any coverage at all in fact, will be entering opinions I see here.