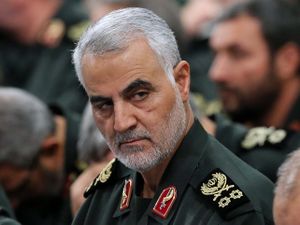 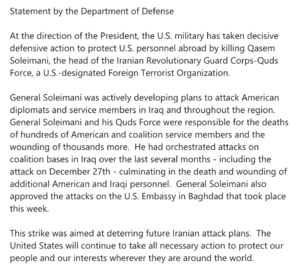 The Pentagon takes responsibility for the assassination, saying Trump ordered it. 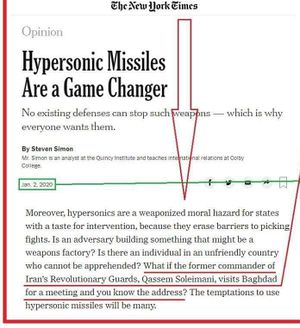 The New York Times speculates about assassinating Soleimani at the Baghdad Airport just hours before it happened.

Who was Qasem Soleimani?

Role in Syria and Iraq

There are two popular versions of what external factors motivated Russia to deploy forces to Syria. One of them ('semi-official') is a visit of Soleimani to Moscow who is said to convince Russian leadership to intervene/deploy airforce. Another (opposition/Strelkov) is a request by Obama; an indirect evidence for this may be Putin's comment to the effect that 'our agreements with Obama on Syria' did not work out.

Soleimani was from time to time photographed with pro-Iranian groups fighting in Iraq and Syria and is described as a 'key strategist and commander leading Iranian military advisers assisting Syrian and Iraqi troops'.

It is claimed that “Iraq’s government authorities regularly invited Soleimani to meetings regarding various subjects, this is why he had been constantly traveling to the country” and that he was a “formal” and “high-profile” guest of the Iraqi government. The Iraqi PM later stated in parliament that he was due to meet Soleimani later on the day he was assasinated to recieve Tehran's response to a Saudi message in a descalation process being mediated by Iraq.

Noted. There were 66 hostages. After two weeks, 13 women and African Americans were released. The Iranians freed Vice Consul Richard Queen after eight months because of severe illness. The 52 remaining Americans were held prisoner until Ronald Reagan was inaugurated president in January 1981. Then they were released. --Resup (talk) 05:37, 5 January 2020 (UTC)