In September 2015 Russia deployed a large contingent or air and land forces to Syria. On September 30 Russia launched airstrikes on ISIS, al-Nusra Front and other rebel groups, including ones created and supported by the US. The move came as a surprise to US officials, despite the evidence collected here and despite president Putin's speech at the US General Assembly on September 26.

As of October 2, 2015 the Russian strike force consists of over 50 aircraft, including twelve Su-24s, twelve Su-25s, four Su-30s, six Su-34s and a number of helicopters. Initial claims of the presence of six MiG-31s have not been confirmed. 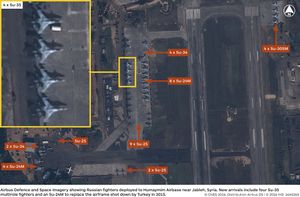 Peskov comment: there are only federal Russian armed forces, and internal troops, no Chechen spetsnaz (Kadyrov also presented his fighters as a part of Russian forces)

Further clarification by Kadyrov (they are volunteers...pretend to be IS...)

Shows results of 5 years of civil war (Idlib, Aleppo)-blames Russia for everything. (Russia bombed court house, hospital, and fruit market, in particular; no effort made to figure out who is really to blame). Update seems to be, text over video, driving home talking points for dummies, now (after Russian withdrawal) removed.

Denied by US diplomats and military, according to Alexey Borodavkin , Russian representative at UN in Geneva- TASS, Apr. 17, 2016

It is said that when Western-backed rebels were bombed, Russian and US planes were in the same area and that communication failed (quoting CNN report). Urgent consultations between militaries were conducted.

The U.S. diverted armed FA-18s to the area after the first round of two strikes, and the pilots then tried to call the Russians on a previously agreed-upon pilot-to-pilot communications channel but did not receive an answer.

Russians/ex-USSR on the side of the rebels 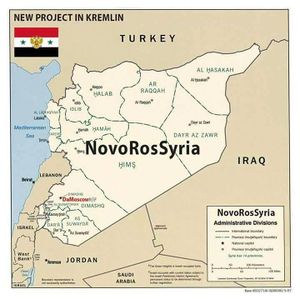 Putin, October 27. 2016 (improved automatic translation): Stopping the bloodshed and launching the political process fails. It would seem that, after long negotiations, an enormous effort and complex trade-offs a united front against terrorism finally began to form .

However, this did not happen, it is not actually created. Our personal agreement with the President of the United States did not work and in Washington there were forces which did everything for these agreements not to be implemented in practice. All this demonstrates the inexplicable, I would say, the irrational desire of Western countries over and over again to repeat their mistakes, how our people say, stepping on the same rake

See also US involvement in Syria

Moved to Russian fleet in the Mediterranean

That would be fairly impossible name for a Russian speaker; may be other Slav (e.g. Bulgarian, Serb-unsure what exactly)--Resup (talk) 20:22, 25 November 2015 (UTC)

Those are deaths reported as combat. There's also the young soldier Vadim Kostenko, also in Latakia, but a technician in more formal service at the Hmeymim air base. Moscow says he committed suicide over a broken relationship. Some doubt this, but there's no known rebel presence nearby. --Caustic Logic (talk) 17:34, 25 November 2015 (UTC)

Name of the officer was published.

A video emerged of suicide bomber attack near Palmyra. One soldier has uniform resembling Russian, others are Syrian. It is uncertain whether this is the same event, but commenters speculate that it is. Palmyra is in Homs governorate, so reports may be consistent. (Similar discussion is in Rusvesna article).

On July 8, 2016 Russian training military pilots Ryafagat Khabibulin and Yevgeny Dolgin were making a test flight of a Syrian Mi-25 helicopter with ammunition in the Homs region (Syria)," the defense ministry said. "At the time, a large detachment of ISIS gunmen mounted an offensive against Syrian troops to the east of Palmyra and breaking through the defenses, made a rapid dash into the area, threatening to capture the heights." Syrian reserve units that could be redeployed to the area to curb the terrorists’ advance were not available then, the ministry said. "The crew received a request from the Syrian grouping’s command to deliver air strikes at the advancing combatants," it said. "Crew commander Ryafagat Khabibulin made a decision to attack the terrorists. Owing to the Russian pilots’ correct actions, the terrorists’ attack was thwarted." "After having run out of ammunition, the turning around helicopter was hit by militants’ gunfire from the ground and crashed in the area controlled by the Syrian governmental army. The crew died," the defense ministry said. The Russian military pilots were nominated for top state awards.
Interfax, quoting military sources, claim that "terrorists" (IS from the context) used US-made TOW missile to shot down the helicopter.
English-language version by Mirror
Shoot down appeared on video

For comparison, TOW 2B Aero (wireless) missile in slow motion
In Russian sources, discussion on whether this is Mi 25 or MI 35 (they look similar, but Mi 35 have shorter armament 'wings' and non-retractable landing gear). Not clearly seen on the video either way.

Conflict intelligence team (Moscow based opposition blog founded by Ruslan Leviev, a Bellingcat contributor) offers some doubts, but not a resolution. (Some other thing have exploded in Syria in those days, indeed...).

Woman photo is on a driver license but not a genuine one, a joke, souvenir, or a fake, according to this

Kremlin reports all those on board Russian helicopter Mi-8 shot down in Syria died TASS (Engl).
Details on downed helicopter offered in this twitter post
Crew is named
Retaliation strikes reported

According to comment, in the 'prime source' it was noted that this is just Su-24 fly-by, not a shoot down (so crash sound is added than)

"If the Russian Federation gets no response from the United States to these proposals, it will proceed starting March 22 to unilateral application of the rules specified in the Agreement," head of the Main Operations Directorate of the Russian General Staff Sergei Rudskoi said.
"We emphasize that military force will be used only after we receive credible evidence of systematic violations by armed groups of the commitments made within the framework of the Joint US-Russian statement on the cessation of hostilities in Syria as of February 22, 2016. Military force will not be used against the groups, observing the ceasefire regime, as well as against the civilian population and civilian facilities", he added.

24 May, 2016. Negotiations with some groups, trying to separate their territory from (clearly) terrorist groups, and ensure that shelling is not conducted from territory of their control, will be continued past 25 May.