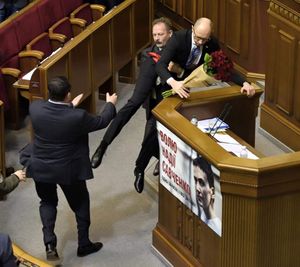 Oleg Barna, a Poroshenko block deputy, presents flowers to Prime Minister Yatseniuk (click on the picture for the linked video) 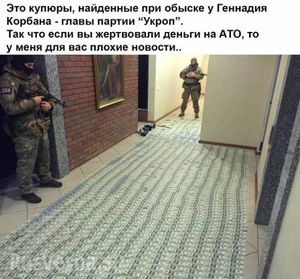 Korban flat during a search, Oct.'15, floor covered with dollars. Text: "(...) if you donated any money for ATO, I have some bad news for you."

26.12 Gryzlov appointed plenipotentiary representative in Contact Group on Ukraine - Kremlin, TASS (Eng). Gryzlov is an experienced politician, hailing from St. Petersburg. He was Duma Speaker ( twice) and the ruling party leader in the past; on the Russian Security Council since 2012. He led MOI reforms as a minister of interior in early 2000's. (Wikipedia, Rus.), (Eng).

An 'explosion' (grenade/IED ?) in Kiev, one killed (report and video).

24.12 Gennady Korban was arrested again after a search of his flat in Dnepropetrosvsk, taken to Kiev for a compulsory medical examination (see 31 Oct.'15 archive for the previous arrest ). (Korban auto-biography -Rus.)

Boris Filatov stepped down as Rada deputy, after winning the mayor of Dnepropetrovsk elections (17.11.15)

23.12 A Gallup Poll released today finds that Poroshenko's approval rating is at 17% (down from 47% in 2014), on par with Yushchenko's rating in 2008 but 11 p.p. lower than Yanukovic's in 2013. The government as a whole has an approval rating of not more than 8%, on par with the situation three years after 2004's "Orange revolution". This with Crimea and the peoples republic's not included in the poll.

21.12 An explosion at a public transport stop in the center of Donetsk was reported. Ukrainian RSG is suspected.

Russian Prime Minister Dmitry Medvedev announced that he has signed a decree on the introduction of the most favored trade regime with Ukraine, instead of a free trade zone agreement with Ukraine (the change removes some of the benefits). Further sanctions will be introduced against Ukraine from January 1, 2016. (TASS-Rus.), google translation. At about the same time, it was announced that Russia, EU, Ukraine to hold talks on risks of association agreement (TASS-Eng.) . Those talks have failed (which does not mean that they cannot be revived).

Russia will go to court to claim back the 3 bln $ loan given to Ukraine, at time of Yanukovich presidency. The loan was due for repayment on Dec. 20, 2015; Ukraine announced that it will not pay (RIA).

Just hours after the EU had to admit to not being able to solve the refugee crisis from Syria together, the Commission sets the next character in a very questionable direction; The European Commission recommends the abolition of visas for citizens of Ukraine and Georgia. The Commission was able to propose to EU leaders that they take rapid decisions on visa liberalisation for the three countries, said European Commission President Jean-Claude Juncker on Friday on the outskirts of the EU summit. The background are geopolitical considerations from Washington, which can be seen especially in the context of NATO strategy: Ukraine is upgraded with European taxpayers' money to the NATO outpost against Russia. The country has long been bankrupt, but is held by European taxpayers from going under the water. But the money does not come for the benefit of ...population in deep distress but for more weapons. The government recently approved the new budget. This budget has its center of gravity not in social or educational programs, but in military spending.

Visa program is designed to allow citizens of Ukraine and Georgia to travel to EU countries visa-free, for up to 90 days of stay within any 180-days period. But visa/work permit is still needed to work (this fact is often hidden from view creating wrong impression), and there is no social protection, so desire to achieve this 'visa-free regime' is rather illusory, and hopes it will improve life are misplaced; certainly this does not justify the high cost in injured and killed and left homeless in the conflicts. (Visa regime for Ukraine and Georgia is along the lines of the Eastern Partnership, currently in place for Moldova. But visa-free travel for Moldova is restricted to short visits and does not allow to work.)

Avakov issued a video of the conflict with Saakashvili. At an official meeting chaired by Poroshenko, Saakashvili accused Avakov of corruption, promised a proof, was doused with a glass of water (the quarrel is conducted in Russian language, of course)

15.12 Leading Dutch paper De Telegraaf reports (English translation) about corruption in the SBU including ties of Nalyvaichenko to art smuggling schemes, calling into question the integrity of evidence provided by them for the MH17 investigation.

14.12 DPR publishes map of Minsk agreement violations by UAF; over 430 artillery and armed vehicle pieces near the separation line. Appeals to Normandy format countries to give an evaluation of military build-up in Donbas.

12.12, LPR. Cossack opolochenie commander Pavel Dremov killed when his car was exploded on the road Pervomaisk-Stakhanov. His driver died as well. It is said that Dremov was to be married in the city of Stakhanov. Dremov had a well known falling out with LPR head Plotniskii and accused him of illicit dealings. LPR police opened an investigation, blamed 'a special Ukrainian subversive and terrorism group' operating in the republic for his murder (Rusvesna, 12.12.2015) 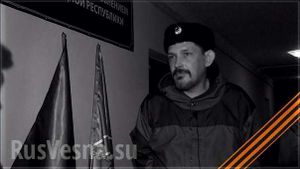 Dremov memorial meeting in Stakhanov, many attended (photos, videos-Cassad)
Why commanders are killed in LPR? - Graham Phillips interviews Igor Plotniskii (google translated text and video), Rusvesna, 22.12.2015 (Carpenter=Plotniskii, Brain = Mozgovoi). 'There are many mysteries in the death of Mozgovoi...The war is not over, and Ukrainian RSG are still operating...suddenly remembered about the "Harry Potter" books by JK Rowling and mentioned in his speech that "the love of family - the best body armor".

11.12. Rada meeting. Deputies hoped that Prime Minister Yatseniuk, whose 'immunity' deal expired after one year, during which he could not be fired, will present a full report on his activities, as required by the regulations. Initially, the Prime Minister even has requested a three hours time slot. But, appearing in parliament, Yatsenyuk was limited to 15-minute presentation and responses to cues from the audience, almost turning this into the traditional Friday "hour of questions to the government. He proceeded with describing his reform plans and called to support the budget proposal -TASS (Rus.) Some skirmishes occurred at the meeting when Oleg Barna, a Poroshenko block deputy, tried to remove Yatseniuk from the podium. (Barna subsequently was taken off Poroshenko block list).

8.12 Joe Biden visited Ukraine. Some highlights of the visit include showcasing support of the current government, including Prime Minister Yatseniuk, while criticizing corruption.

4.12 A settlement Zaitsevo in the buffer zone under Gorlovka was shelled by Ukraine, and a woman was killed. According to Basurin (DPR), this was a result of mortar fire from the positions of a nationalist battalion "Aydar", under the command of Ukrainian lt. col. Melnichuk. In another incident, a school in Zaitsevo was shelled from an automatic grenade launcher while children were at school. Children were evacuated; no casualties reported; but the shelling continued for most of the day. School building was damaged, and power supply in the settlement disrupted.

4.12 Basurin: "Yesterday the military and political leadership of Ukraine announced the "victorious" peaceful seizure of settlements of Pavlopol and Pishevik, in the Mariupol direction. Violent capture of those settlements by UAF is a precondition (i.e. precursor) for the resumption of hostilities".

2.12 Oligarch Firtash cancels first post-Maidan trip to Ukraine after Interior Minister Avakov posts to facebook a picture of ten masked and heavily armed Azov fighters at the airport "waiting for him".