US airstrike on SAA in Deir ez-Zor 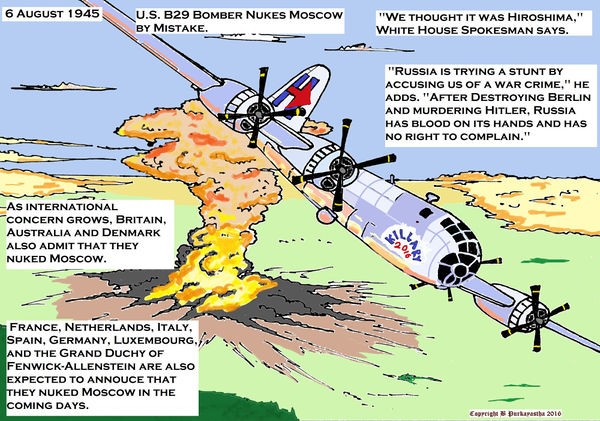 "Russia has blood on its hands and has no right to complain." 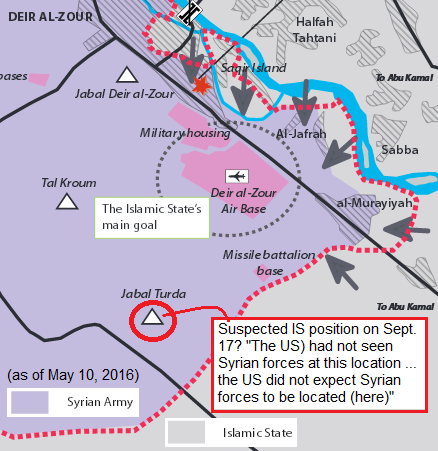 What was generally known vs. what they said

Sept. 17, 2016 US "Freudian slip": air strikes on Syrian positions in Deir-ez-Zor, which killed at least 62 Syrian soldiers, 160 wounded; after SAA al-Tharda Mountain positions were hit, IS attacked at once and according to media reports coming as events unfolded, initially gained control(SANA) over mountains overlooking the airport. Eventually, as is indicated by Vitaly Churkin, below, Russian air strikes helped prevent IS advance (and earlier gains were reversed).

US centcom attributed the strike to an error.
Russia asked for a UN meeting, following on SAR protesting the strike; revealed some details of earlier agreements with the US on ceasefire, indicating earlier that USA is not fulfilling its part, and the agreement is in danger
Russian MoD extra press conference was announced but, apparently, has not yet occurred

General-Lieutenant Rudskoy led the press conference, reports by head of reconciliation center General Savchenko, and a Syrian MoD representative sitting next to him regarding losses were provided.

Samantha Power 'we will investigate', and goes into into accusing Syria and Russia in everything (chemical weapons, torture, targeting civilians, bombing hospitals, etc). She complains that this emergency meeting was a "stunt," over one accidental strike, and asks whether there should be one after every alleged Russian or Syrian crime.
Vitaly Churkin walks out, gives a press conference (Eng.), suggests that that was not accidental (wonders why the US was suddenly trying to help the SAA against ISIS in this area, in order to make this "suspicious" mistake in a "reckless, reckless" attack.). Spills some beans on the agreement (5:00), tells that on September 19, US-Russian implementation group will start operating and US would have certainty whom they are hitting; but they preferred to act otherwise instead. Asks "who is in charge in Washington?" (~10:30). Q: is this the end of the deal between US and Russia? A: ...big question mark... if US response is like Samantha Power's, we are in serious trouble (12:30)

Ambassador Power seems to feel this was an obvious mistake, everyone knows the US is leading the real fight against Islamic State, while the Syrian government has allowed it to grow. She's clear the US would never intentionally attack a Syrian military position and assist and IS advance. In fact, there's an implication from the area chosen that the US was trying to help the SAA as they decimated them instead. So ... how are these intentions coming trough on the end of the not-quite-allies killed in this not-quite-friendly-fire incident?

US appoints a 1 star general to investigate.

The report says the attack lasted an hour (13:55 to 14:56), ending just four minutes after the Russians clarified who they were attacking. The article explains why the Russians didn't tell them before the attack who should be there:

This was the first time that the U.S. coalition used a special United States/Russia Hotline "to inform of an imminent strike," the report adds. But the coalition passed along incorrect coordinates, which "may have affected the Russian response to the notification and caused considerable confusion."

So in addition to the targeting error, they also made an error is reporting the target area, both contributing to the attack being able to happen. However, it's said the Russians contributed to the long attack by waiting 27 minutes to talk to their usual contact and not the battlefield commander, after they decided halfway through what was going on.

Nine months earlier, in December, 2015, an apparent US-coalition strike hit a Syrian army camp near Deir Ez-Zor killing 3 soldiers. See Airstrike on Saeqa military camp near Deir ez-Zor. In that case, the coalition acknowledged it had jets in the area, exactly an hour before the attack (depending which time zone was used - unclear). So they denied the claims, and in fact blamed Russian bombers for the supposed mistake (long-range bombers came in and flew the same area an hour later, at the same time as the attack, all seen on radar, according to unnamed officials).