31 Jan. SANA reports that a ten truck SARC human aid convoy was prevented to reach Hajin town by a local militia who say they were ordered by US forces to keep the convoy away.

30 Jan. Following the release of Leyla Güven, a statement in support of her and many others on hunger strike for the end of the isolation of Abdullah Öcalan is signed by hundreds of intellectuals and read in front of the German Parliament.

A Turkish military delegation is heading for Moscow to discuss Syrian matters tomorrow.

29 Jan. Reports that the SDF has asked Hezbollah to mediate in the negotiations with the government are declared untrue by its spokesperson.

According to Firat News Agency, the remaining ISIS fighters in the Hajin pocket demand that they get a "corridor" to move to Idlib over Turkey, otherwise they would harm the civilians they hold as human shields. The SDF reportedly refused.

France takes back 130 French ISIS fighters hold captive by the SDF to put them on trial. This makes it the first Western country to answer the SDF calls to take their captured ISIS terrorists back.

28 Jan. Syria and Iran sign a number of agreements, among them about long-term strategic economic cooperation.

26 Jan. The ISIS fighters remaining in the Hajin pocket show no signs of giving up.

The YPG releases a statement commemorating the fourth anniversary of the liberation of Kobane.

25 Jan. Activist Leyla Güven, who has been on a 79 days hunger strike demanding the end of isolation for Kurdish leader Öcalan, which has sparked solidarity demonstrations all over Europe, is released from Turkish prison.

24 Jan. A "solidarity pause" in front of the Venezuelan embassy in Damascus is attended by many political and public figures after the government had already condemned the "flagrant interference" in Venezuelan affairs by the US and its satellites.

23 Jan. Reports come in that after further SDF advances in the Hajin pocket, parts of the remaining ISIS fighters have surrendered, which led to the securing of many civilians. The remaining gangs are now reduced to the territory of a single village at the Euphrates, Marashidah.

Erdogan is in Moscow to discuss northern Syria with Putin. Elijah Magnier sums up the situation.

After former US anti-ISIS envoy Brett McGurk said in a CNN interview on Monday that Turkey has provided ISIS "with everything they needed" over the years, PYD's Salih Muslim points out that this is obviously true, but not news to anybody who followed the events in Kobane.

22 Jan. Bashar al-Ja'afari calls on the UN to stop the constant Israeli attacks in violation of international law and invokes the prospect of "symmetric" retaliatory attacks on Tel Aviv airport.

Jordan opens the main Jaber border crossing with Syria for the first time in three years.

19 Jan. Russian military police said to be on patrol in Manbij -Cassad (photos).

Hawar News Agency publishes a ten points list it says it obtained from Kurdish sources that represents their position in the negotiations with Damascus over the future of Rojava.

17 Jan. The SDF takes Al-Susa in the Hajin pocket and reduces ISIS to a territory of four villages.

16 Jan. Unsurprisingly, the idea of a Turkish-controlled "safe zone" along the border on Syrian soil, brought up by Erdogan for years and now picked up by Trump, is opposed by the Kurds, Damascus and Moscow.

15 Jan. According to Arab media, the PMU have stopped a US military reconnaissance mission in Anbar province border region and forced them to return to their base.

Several gulf airlines are briefed on the situation at Damascus airport in preparation for a resumption of flights.

According to the Syrian govenment, negotiations between them and the Kurds about resolving the situation in Rojava have "intensified". This seems to be confirmed by a statement from PYD co-chair Shahoz Hesen.

12 Jan. Another Israeli attack on targets near Damascus ends with most missiles intercepted. 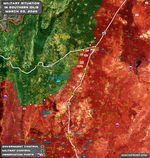 As part of the surrender agreement, HTS is now in control of the Taftanaz airbase.

11 Jan. Italy considers to re-open its embassy in Damascus.

According to a US military spokesperson, the withdrawal from Syria has begun.

10 Jan. After HTS scores several victories in the Idlib-internal "rebel" war, the Turkish-backed gangs basically surrender and agree that those areas will be run by the HTS' "salvation government" in the future.

9 Jan. At a joint press conference with his US counterpart, the Jordanian Foreign Minister demands that Israel returns the Golan Heights to Syria.

6 Jan. The winners of the Syrian Science Olympiad are honored in Damascus.

HTS keeps on advancing against Turkey's proxies in Idlib pocket after the Zenki group was defeated and had to retreat to occupied Afrin.

5 Jan. Under heavy bombardments by US-coalition jets, ISIS withdraws from the town of al Shafa in the Hajin pocket. Five fighters are captured by the SDF, among them one from Ireland and two from the US.

4 Jan. Heda Saratova, member of Chechnya human rights council, says that women and children, including at least one woman-a mother of many children and a child with Russian citizenships, from Chechnya, were killed, and more injured, in US-led coalition airstrikes in IS-held Deir ez-Zor area during the holidays. Asks for a corridor for women and children to leave. (Rus.)(Robo-Eng).

3 Jan. The "rebel" war between HTS and Turkey's proxies is now raging over the whole Idlib pocket. A SOHR summary counts casualties in the hundreds over the last three days.

Firat News Agency interviews TEV-DEM Diplomacy Officer Aldar Xelil about the situation in Rojava and their relationship to international forces and the Damascus government (two parts).

Jaysh al-Islam, who were green-bused from the eastern Ghouta to Afrin canton, declare their intent to move south and join the "rebel" war in the Idlib pocket fighting their old rivals al-Qaeda/Nusra/HTS.

ISIS forces in the Hajin pocket cross the Euphrates and attack a SAA camp, killing 20+ soldiers before fleeing in the direction of Homs desert. Meanwhile on the other side of the river, the SDF is still advancing against the cult.

1 Jan. In a new round of the inter-"rebel" war inside Idlib pocket, al Qaeda captures several towns and villages from the Turkey-backed Nouredine al-Zinki group after the latter had killed a couple of fighters of the former.