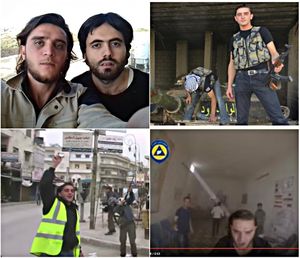 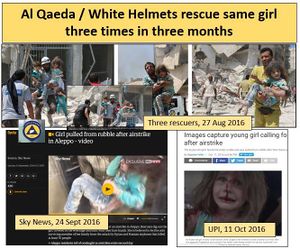 In reality the White Helmets is a project created by the UK and USA. Training of civilians in Turkey has been overseen by former British military officer and current contractor, James Le Mesurier. Promotion of the program is done by “The Syria Campaign” supported by the foundation of billionaire Ayman Asfari. The White Helmets is clearly a public relations project which has received glowing publicity from HuffPo to Nicholas Kristof at the NYT. White Helmets have been heavily promoted by the U.S. Institute of Peace (U.S.IP) whose leader began the press conference by declaring “U.S.IP has been working for the Syrian Revolution from the beginning”.

Apart from the PR work, White Helmets work in areas of Aleppo and Idlib controlled by Nusra (Al Queda).

US and UK tax dollars pay for a program which has an appealing rescue component and is then used to market and promote the USA and UK policy of regime change in Syria in de facto alliance with Nusra.

The fake “independence and neutrality” of White Helmets is shown by their active promotion of a No Fly Zone.

— Rick Sterling in About Those Chlorine Gas Attacks in Syria - Humanitarians for War, part 2 (Counterpunch, April 3, 2015)

During my time in Hanano East #Aleppo I spoke with many civilians who had been liberated from their four year imprisonment by NATO and Gulf state terrorist brigades. I asked them all if they knew of the #WhiteHelmets. All of them looked puzzled and most of them replied that no they did not know them at all.

Some said they knew of the workers who called themselves "civil defence" and worked with the terrorists. I asked if they also helped civilians, one man only said that yes sometimes they did help him and his family.

I interviewed the Syrian Arab Red Crescent workers who were on the scene in Hanano. They had never come across the White Helmets in all the time they had been working in East Aleppo since the area was invaded and occupied in 2012.

I have been told that no White Helmet operatives have accepted amnesty so this raises the question...where exactly are the White Helmets? If they were truly a neutral, impartial organisation working for all humanity, why were they not out in force helping civilians to escape to safety?

One leader of a special National Guard unit allied with the SAA told me tonight that during the battles for Ramousa, they had found one militant who had three ID cards in his pockets. One from Turkey, one from Nusra Front and one White Helmet ID card.

It seems the farce that is the White Helmets is coming to an end...

On April 27, 2016, State Department spokesman Mark Toner praised the group in a daily press briefing, claiming it has saved 40,000 lives. Asked why, if the group is so wonderful, ten days earlier their leader Ra'ed Al Saleh had his visa revoked and was sent back to Turkey when he tried to enter the US to receive a humanitarian award, Toner refused to make comments on specific visas but pointed out that if individuals have ties to extremist groups, this doesn't destroy the quality of work of other groups they might belong to. He mentioned that the "White Helmets" have received $US 23 million through USAID.[1]

Testimonies, reports from the ground 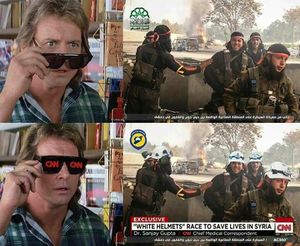 How a group of ill-equipped civilian volunteers has saved 3,700 lives since 2013.

Made up of ordinary citizens, Syria's White Helmets are the first to rush in when the bombs hit.

British government official agencies are the patrons, managers and funders of the White Helmets, who have been the go-to source for the mainstream Western media reporting on the ongoing Syrian war. For good measure, the U.S. State Department's Agency for International Development (USAID) has kicked in $23 million to finance Mayday Rescue, the cutout between the White Helmets and the British Ministry of Defense, the Home Office, the Foreign and Commonwealth Office and 10 Downing Street. This is all a matter of public record, yet no Western major media outlet has bothered to include these "data points" in their lavish coverage of the White Helmets.

In January 2015, the British Ministry of Defence renamed its Security Assistance Group (SAG) the 77th Brigade. The name change was in honor of the legendary World War II era British special warfare operator Orde Wingate, who as a Major General in the British Army founded the 77th Indian Infantry Brigade, which conducted "long-range penetration" operations in the CBI theater. The renamed current 77th Brigade, according to its own website, conducts "non-lethal engagement and legitimate non-military levers as a means to adapt behaviors of opposing forces and adversaries," including information activities and outreach. By its own public description, the 77th Brigade is "an agent of change." They are nowadays referred to as "Twitter Troops" and "Facebook Warriors."

“There are entire families still under the rubble. We couldn't reach them yet, because as you know the process of removing debris must be done with extreme caution," an official, from a civil defense group operating in rebel-held areas, told the Majd agency.

The death toll is expected to rise, with Syria's Civil Defence, a local NGO, saying they are still rescuing people from under the rubble.
In a statement released on Saturday night, the Syrian Civil Defence organisation said airs raids on Douma over the past week have killed more than 200 people and wounded more than 400 others - mostly women and children.
The group called upon international organisations and human rights groups to act immediately as it declared Douma as a "disaster town". 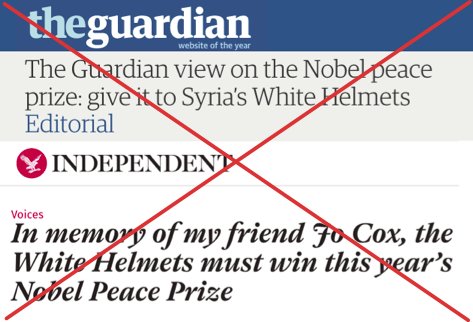