27 Apr. Dmitrii Aksenov, one of the first volunteers of Mozgovoi's "Prizrak" battalion, who later served elsewhere, is killed in Donbass, 03.01.1991-27.04.2020, according to social media reports, with photos.

19 Apr. Opoclhenie: "Throughout the day, UAF periodically conducted non-intensive shelling: Veseloe, Spartak, Yasinovatay checkpoint (YaBP), industrial zone, Staromikhaylovka, Krutaya Balka, (82mm, BMP, large caliber machine guns, small arms, SPG). Today at about 6 a.m. in Yasinovataya, DPR air defenses discovered and shot down an enemy UAV with an explosive device suspended from it, flying in the direction of the school at number 4 School street. "Ukrainian knights" thus decided to "congratulate" the people of the DPR ... Killing someone on Easter is their tradition ..." (as per the source). Another report claims that: "In the course of deciphering the data from the UAV, it was established that the purpose of the deadly “gift” launched by the criminals of the 54th UAF brigade was not an educational institution, but located in the immediate vicinity the Church of the Holy Apostles Peter and Paul. "

Ukrainian 'Joint operation forces' reports that 3 of its soldiers were wounded yesterday.

13 Apr. Second week of forest fires near Chernobyl: photos, aerials, video. Radiation measurement in Chernigov, some 70 km away, with wind blowing towards it, shows around 10 (and the range 7-14) microR/hour according to the video, which would be at the level of maximum acceptable radiation. Sucking in air by vacuum cleaner through a filter, to capture possible radioactive particles, shows about 11.6 microR/h, on the same video. Official measurements in the area are in the range 8-132 microR/h ( 100 nanoSv/h = 10 microR/h). 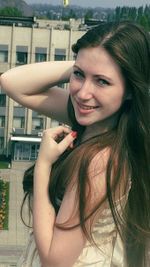 Miroslava Vorontsova is killed by Ukrainian fire in Shirokaya Balka while Ukrainian drone operated in the area; a young man Mikhail A. is wounded.

1 Apr. at about 7 pm Ukrainian forces fired on residential areas of the LPR. In Golubovskoye village, 4 Kochenkoko Street, Maria Volgina, 1940 DOB, was wounded and died the next day in the hospital of her wounds.