31 May. Suspect arrested in Babchenko affair tells that (he believed) he was helping Ukrainian security services. He is a Ukrainian businessman involved with weapons deliveries for ATO with in the past -strana.ua . Organizer suspect name has been made public. His attorney: Boris Herman (Герман, German) is an Executive Director of the Ukrainian-German joint venture "Schmeisser", the only non-state enterprise for the manufacture of weapons in our country. It has long industrial relations with the Ministry of Defense of Ukraine, Boris himself is known for his volunteer activity for the needs of ATO. It is his optics that is used on the rifles of our snipers, namely, he upgrades and creates the most powerful sniper complexes based on existing army weapons.

In another report, the hired 'killer' himself came to SBU. Ukrainian activist, ATO veteran, and formerly Christian Orthodox hierodeacon Alexey Tsimbaliuk claimed on social media that he is that 'killer'. 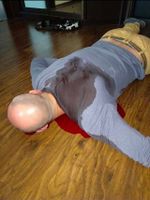 30 May. Arkady Babchenko arose from dead to have a press conference (Rusvesna)

29 May. DPR MOD: one DPR soldier is killed by Ukrainian shelling

27 May. After attempted Ukrainian attacks on Gorlovka, it is said that situation somewhat stabilized.

Gazprom and Turkey signed the 'Turkish stream' protocol. This comes few days after it was announced that Russia gave Turkey a 1 bln USD discount in a dispute over past deliveries.

26 May. Reports of Ukraine shelling and/or (unconfirmed) establishing positions in Petrovskoe, south of Donetsk (map), a supposed separation zone, threatening DPR-held city of Dokuchaevsk. In a later report, it is denied that Ukraine made advances in Petrovskoe, which is still under DPR control. Ukraine established positions in Viktorovka from last summer, and have recently returned to their old position on height 202.9, 2 km south of the village.

RT publishes a 50min documentary film about the construction of the recently opened bridge over Kerch Strait which connects Crimea with mainland Russia.

23 May. DAN news: captured Ukrainian soldier testified on Ukrainian plans to 'attack' in Donbass before the start of the football World Cup in Russia (14 June-15 July), and that recently given to Ukraine Javelins and other heavy equipment will be 'placed on the front lines' prior to the attack (no independent confirmation). Poroshenko recently presented Ukrainian official version of Javelins purpose, highlighting his role in getting them (but even taking the official version, propaganda or motivational use,- if not more, - is not excluded) .

A policeman is killed by Ukrainian artillery shelling of Gorlovka.

European "Human Rights" court decided that Ukrainian ban on land sales is a human rights violation, in a case brought up to the court by 2 (two) Ukrainians. In response, alternative MP Lyashko threatened to 'burn' Rada if the moratorium is lifted. (It was long feared that lifting the ban, pressed on by Ukraine sponsors, will result in loss of control on top of the range but low priced Ukrainian agricultural lands to transnational conglomerates).

21 May. An important bridge is destroyed in LPR, it is feared that this may indicate preparations for a major Ukrainian attack.

19 May. Gorlovka and vicinity remains a flashpoint. A civilian woman, 1932 DOB, and a DPR soldier were killed. Ukraine shelled residential areas with banned munitions, said to contain nails. New Ukrainian positions near captured by Ukraine Yuzhnoe came under DPR fire; it is said that 2 Ukrainian soldiers were killed and 1 wounded.

According to Russian sources, 3 Canadian instructors were killed and two American wounded by landmine explosion, some Ukrainian soldiers were wounded. DPR blames Ukraine in attempting a provocation by presenting this as a DPR attack.

Reporters without borders on the arrest of Kirill Vyshinsky, a Ukrainian journalist who heads RIA Novosti Ukraine

17 May. Civilian woman, 1983 DOB, resident of Golmovsky near Gorlovka killed by Ukrainian shelling, her daughter was orphaned.

Russia opens a criminal case against the Washington Examiner author Tom Rogan for "public calls for terrorist activity on Russian territory" in the article mentioned below.

15 May. In a ceremony Putin opens the vehicle section of the 19 km long bridge over Kerch Strait that will connect mainland Russia and Crimea. The Washington Examiner asks Ukraine to blow up the bridge.

8 May. Belorussian citizen who served in Donbass opolchenie was sentenced to two years prison term in Belarus'

7 May. Zaitsevo, near Gorlovka, was shelled by Ukraine, an old woman was wounded.

5 May. Marat Mazitovich Musin, founder of ANNA news, often reporting from Syria, died from natural causes in at a gathering of military-sport organizations and cadets in Kazan', from blood clot/heart problem. He was economics professor, and an author of 19 or more books, some co-authored with el-Murid.

3 May. Brazilian ex-opolchenie Rafael Lusvargi (earlier (7 Oct'16) captured by Ukraine in transit, charged, sentenced, and released by Ukrainian court decision prior to a failed group of prisoners exchange, living since in a monastery in Kiev) is outed by 'Radio Liberty', said to be after local employer of Brazilian embassy was present at a meeting of his attorney with Brazilian consulate reps, trying to secure his Brazilian passport. Lusvargi was then captured and harassed by members of a right-wing paramilitary group S-14. Later it was said that he is in SBU custody. New trial will be in Pavlograd. Brother of his attorney fears for Rafael's life and safety. Lusvargi will be kept in custody, by the decision pf Pavlograd court

1 May. DPR MoD: A civilian couple was wounded on May holidays by Ukrainian shelling of Verhnetoretskoe. The Ukrainian militants suffered a well-deserved punishment: their gunspots were suppressed by the military personnel of the DPR from the armament not prohibited by the Minsk agreements