29.6 Foreign drone operators photographs, made themselves during testing, found on a Ukrainian drone intercepted by LPR-report. Not Ukrainian style uniform; and one operator said to be photographed earlier when Georgia attacked Abkhazia

28.6 Ukraine my default on 24 July-date of the next substantial repayment day, according to a report on Russian TV, referring to opinions of analysts -Goldman Sachs report mentioned (developing)

27.6 The Ukrainian authorities have not fulfilled any of its obligations with respect to the special order -Zakharchenko. DPR/LPR were not consulted; instead, Kiev consulted Western experts, in particular Venetian commission of the Council of Europe (the commission conclusion noted there are no provisions for special regulations, allowing to adopt laws to Donetsk and Luhansk regions).

Little progress in Minsk. Kiev did not present proposals on special status or local elections in Donbas

Poroshenko: The initiators of creating any republics will be brought to justice, should anyone try, the response will be instantaneous

Media reports: Europeans demand that we come up with a strategy for the special status for the Donbas region. This status must not be limited to three years (the way it is envisaged in the law on the status of separate territories) and be applicable on a permanent basis," first deputy head of the parliamentary committee on foreign affairs Ivanna Klympush-Tsintsadze said.

New Odessa MOI boss, Saakashvilli teammate from Georgia, ordered checkpoints closed, machine guns returned to storage'. -Those officers are 'too corrupt', "people need not be afraid of police and should respect law..." In the meantime, Saakashvilli [http://www.charter97.org/ru/news/2015/6/19/156279/ threatened to fire customs officers 'if the income will not increase'.

18.6 US Senate passed defense bill, 300 mln for arming Ukraine, (US News) , (TASS)-- (Rob Portman amendment). "Half of that $300 million is fenced off until at least $60 million is spent on the most important capabilities the Ukrainians need and have requested: real-time intelligence, defensive lethal assistance, and counter-artillery radars. If the Administration fails to use this money for the purposes specified, they must use it to support other nations facing an increased risk of Russian aggression"- (June 10, 2015 press release).

Nalivaichenko gone, replaced by Vasilii Gritsak -currently head of the Anti-Terrorism Center of SBU - first deputy head of the SBU; works for SBU since 1990

16.6 Contact group meeting: no breakthrough TASS (engl.). In the Russian version: under-100 mm weapons withdrawal almost agreed; (only) technical matters remain. (Tagliavini was there for OSCE; said her successor was already found; Азамат Кульмухаметов -Azamat Kulmuhametov is a new face for Russia--previously had a good look on Syria ).

Poroshenko tells Rada that he is not happy with Nalivaichenko work in SBU, and that he agreed to lead foreign intelligence instead; but he is not yet removed from SBU (that is decided by Rada). All this happens in the background of conflict between Nalivaichenko and prosecuting attorney office and before Nalivaichenko trip to the US, to present to congressmen and experts 'evidence of Russian involvement' in the conflict in Donbas.

Over the weekend, OSCE SMM recorded 594 blasts near Donetsk airport and another 180 in Shirokino -rusvesna.

A meeting in Donetsk, Oktriabrskii district residents asking to protect them from shelling, start an offensive against UAF. Zakharchenko arrived and calmed them down by promising housing in safer parts of the city.

10 civilians were wounded in UAF shelling overnight in Donetsk; opolchenie returned fire, destroyed 4 UAF batteries shelling the city
Graham video from the meeting (English captions): Donetsk residents tell about shelling by Ukraine, harsh living conditions, (no pensions from Ukraine). Blame Kiev, say that Minsk not fulfilled, heavy Ukrainian weapons not moved; wonder when this all will end, ask for help. (At the meeting, Zakharchenko made a list of concrete problems/requests, was able to resolve what can be resolved).
Cassad, "On horrible and strange war". A woman from Donetsk report : ... 'You understand that your personal life is not worth anything at all. You and your child - just a target. And behind a human shield of you and your family, someone sweet eats, well sleeps, decides on splitting Donbass profits, sells arms, satisfies political ambitions on the international scene and in the media, including LiveJournal'...

Large-scale fire at an oil depot in Vasylkivska district of Kiev region began in the evening of Monday, June 8. Five people were killed and 18 injured. According to Avakov, the losses are more than one billion hryvnia (about $ 48 million). GSCHS can not predict when it will be able to extinguish the fire (but it mostly burned out by now)- TASS, 15.6. Ukrainian-origin sabotage for financial gain is suspected

U.S. Poised to Put Heavy Weaponry in East Europe- NY Times 'The “prepositioned” stocks — to be stored on allied bases and enough to equip a brigade of 3,000 to 5,000 soldiers — would be similar to what the United States maintained in Kuwait for more than a decade after Iraq invaded it in 1990 and was expelled by American and allied forces early the next year'.

Foreign military equipment crossed the border of Hungary and Ukraine, said to be related to US-Ukraine joint exercises. However there is a speculation that Uragans could be transferred to Ukraine on those heavy military trucks, and the trucks themselves returned back. From a re-post on Cassad: "One of our readers sent to the Carpathian Vestnik magazine the photos below. The images were taken at a border checkpoint Záhony 06.09.2015 at noon on the Hungarian side. Special convoy of vehicles came from Ukraine. We tried to ask for information in the Border Police, but, unfortunately, we have not yet received an answer"

A law is introduced in Rada which would fully [block all goods transfer to Novorossia including first necessities, food, and medicine according to commentaries of Medvedchuk, Plotniskii quoted by Rusvesna.

12.6 Concerns grow over possible escalation in Transnistria over border transit closure with Ukraine, heavy weapons moved to Odessa, foreign advisers and Saakashvilli on hand: described in an article 'war in Transnistria may start on Day of Russia (June 12 )'--(well, or on any other day thereafter)

11.6 Offensive weapons: The US Senate has "included provisions in its military policy bill to arm Ukraine with anti-armor systems, mortars, grenade launchers and ammunition to aid in its fight against Russian-backed separatists. It would also prevent the administration from spending more than one half of $300 million in aid for Ukraine unless 20 percent is earmarked for offensive weapons. The House has passed a similar measure" -NY Times

The U.S. House passes amendments to the "Department of Defense Appropriations Act of 2015" that prohibit the sending of MANPADS to Ukraine and the training of the Azov Battalion which the initiator John Conyers called "repulsive" and characterized as "neo-Nazi".

9.6 Blockade of Transnistria reported-imports, exports, and people movement blocked by Ukraine; Ukrainian military presence at the border reported to be increased.

'Donetsk, Luhansk self-proclaimed republics ready to remain part of Ukraine'-TASS, and without proposing an amendment on Crimea (listed as Ukrainian in Ukrainian constitution. Republics say that this is not an issue in their competence). The West and Ukrainian media pretend that did not happen (Ukrainian media: even militants consider Crimea part of Ukraine--dropping the rest of the story).

Proposed changes to constitution of Ukraine. Briefly, self-rule for LPR and DPR -being able to decide themselves all important local issues ( economy, public order,cross-border cooperation, language, etc); keeping current elected leaders and deciding this themselves in the future; dropping time limitations in the Ukrainian law on special order of local self-governance; non-block status for Ukraine (i.e no NATO). Ukraine is supposed to promote cooperation aimed at economic development of the region,-details to be negotiated in separate economic agreements.

LPR, DPR announced that they are dropping parts of amendments mentioning Crimea, ask to adopt the rest without delay.
Ukraine pretended that everything is recalled by LPR/DPR, not just the Crimea part 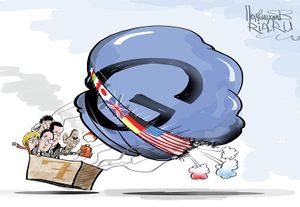 6.6. It is reported that Heidi Tagliavini will step down. DPR expressed regret. Replacement not named yet.

A few hundred protesters gathered near the building of Lvov regional state administration with banners "Special status for Galicia!", "Poroshenko needs to answer!" "Where Is Europe?" The main demands of protesters – to make Poroshenko answer before the people of Ukraine for the critical condition of the country. And demands of a special status for Galicia report, photos; -translated at Fort Rus

3.6 As of time of the report, 5 civilians are killed, 24 wounded; 14 NAF soldiers are killed, 86 wounded. Twenty civilian houses were damaged by UAF shelling in Donetsk.

All water supplies are cut to Luhansk by Ukraine

Basurin: "We do not conduct offensive operations" TASS-English

Opolchenie reports: Ukrainian forces attempted to break through DPR positions in Mar'inka and Spartak (north Donetsk); were repelled and counter-attacked. Ukraine used tank fire, Grads, artillery (those were not supposed to be there by Minsk agreement, and Ukraine notified partners about the violation. Subsequent developments appear to head back to observing Minsk)
Lavrov: "Minsk agreement on February 12, is under constant threat of failure because of the actions of the Kiev authorities, trying to escape from their obligations to establish a direct dialogue with the Donbas"

Cyberberkut published details, photos, of earlier UAF violations-those were known to Ukraine and the West.