US military action against Syria

The United States has been waging a covert but largely exposed proxy war against the Syrian Arab Republic from 2011. From at least 2013 plans have been made for open military aggression against Syria. At the same time the U.S. has been waging a "phoney war" against ISIS with airstrikes in Syria and in Iraq. 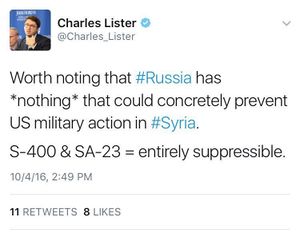 The Wall Street Journal promoting US military action "covertly and without public acknowledgment".

I think you’re looking at three people, four people in the administration who have all argued for use of force, and I lost the argument.

Noted: The leak audio appears to place the blame on lack of use of force on the Republican-controlled congress eg McCain-Graham

Explaining why the US is reluctant to directly join the fight like Russia has:

“The problem is that, you know, you get, quote, enforcers in there and then everybody ups the ante, right? Russia puts in more, Iran puts in more; Hezbollah is there more and Nusra is more; and Saudi Arabia and Turkey put all their surrogate money in, and you all are destroyed.”

He perhaps meant to say "and we all get destroyed." With everyone else on that list but the US already in, "you all get destroyed" remains the running situation, especially for the not-mentioned Syria.