US covert war on Syria 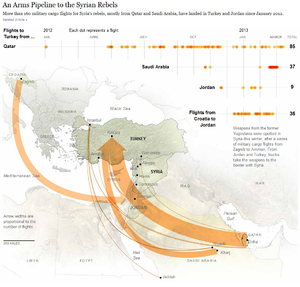 CIA weapons pipeline from Croatia and Gulf states to Syrian "rebels", as exposed by the New York Times on March 24, 2013

First, let’s establish what we do know. Based on multiple reports over the past three-and-a-half years, we know that the Central Intelligence Agency set up a secret program of arming, funding and training anti-Assad forces. This has been reported by major outlets, including the New York Times, The Guardian, Der Spiegel and, most recently, the Washington Post, which—partly thanks to the Snowden revelations—detailed a program that trained approximately 10,000 rebel fighters at a cost of $1 billion a year, or roughly 1/15th of the CIA’s official annual budget.

In addition to the CIA’s efforts, there is a much more scrutinized and far more publicized program by the Department of Defense to train “moderate rebels,” of which only a few dozen actually saw battle. The Pentagon program, which began earlier this year and is charged with fighting ISIS (rather than Syrian government forces), is separate from the covert CIA operation. It has, by all accounts, been an abysmal failure.

One thing the DoD’s rebel training program hasn’t been a failure at, however, is helping credulous reporters rewrite history by treating the Pentagon program as the only US effort to train Syrian rebels–now or in the past. As the US’s strategy in Syria is publicly debated, the CIA’s years-long program has vanished from many popular accounts, giving the average reader the impression the US has sat idly by while foreign actors, Iranian and Russian, have interfered in the internal matters of Syria.

The Liwa Suqour al-Jabal, whose fighters have attended military training organized by the Central Intelligence Agency in Saudi Arabia and Qatar, was also hit last week by Russian raids as Moscow began its air campaign in support of Damascus. New strikes targeted the group's main weapons depots in western Aleppo province and completely destroyed them late on Tuesday, its commander Hassan Haj Ali told Reuters on Wednesday via an Internet messaging service.

The Defense Information Agency report from August 2012 confirms that weapons were flowing to the Syrian armed opposition after the overthrow of the Libyan government in Fall 2011. The claim that the U.S. was only supplying communications equipment and other non-lethal supplies in 2012 and 2013 was for public consumption and ‘plausible deniability’. In reality the U.S. was supplying great quantities of weapons. The ‘dark side’ included a huge budget for CIA operations including training and arming the Syrian armed opposition.

That’s not to say that the CIA effort was bootless. Run from secret operations centers in Turkey and Jordan, the program pumped many hundreds of millions of dollars to many dozens of militia groups. One knowledgeable official estimates that the CIA-backed fighters may have killed or wounded 100,000 Syrian soldiers and their allies over the past four years. By the summer of 2015, the rebels were at the gates of Latakia on the northern coast, threatening Assad’s ancestral homeland and Russian bases there. Rebel fighters were also pushing toward Damascus.

Reflects the main standoff against USSR, with other issues largely tools in the game. Have similarities with our time, despite the cold war ending.

The United States said Tuesday that Syrian President Bashar Assad has failed to prove himself a worthy leader nearly two months after being challenged by President Obama to guide his country toward a democratic transition or leave power.
In endorsing Secretary of State Hillary Rodham Clinton's declaration that Assad has "lost legitimacy," the Obama administration moved closer to openly declaring its desire for regime change in Syria.

The most recent offensive, dubbed Operation Southern Storm, began on 25 June. It was planned, equipped and directed by the [Military Operations Centre (MOC) in Amman], which is staffed by senior military figures from 14 countries including the US, Europe and the Arab Gulf. The MOC provides approved rebel groups with weapons, ammunition and salaries for fighters, and in return, the MOC directs the actions of the groups it supports.

The debate over the proposed steps, which would for the first time position a limited number of Special Operations forces on the ground in Syria and put U.S. advisers closer to the firefights in Iraq, comes as Defense Secretary Ashton B. Carter presses the military to deliver new options for greater military involvement in Iraq, Syria and Afghanistan.

commented on by John McCain

in fact, raises an important question, 'what does an average Syrian citizen want'(with respect to Asssad)--how do they know? --They seem to take the answer for granted.

Senator Graham: "is it smart to have Russians fight IS, and we stay out of the fight?" (Answer provided to him was not affirmative).

Moved to US weapon deliveries to Syrian rebels

US sanctions on Russia in July, 2017 strengthened (art. 225, 226) those previously imposed on Russia in Ukraine Freedom Support Act of 2014. The latter sanctions those who knowingly manufactures, or sells or transfers, or brokers or otherwise assists, or provides financial, material, or technological support, for defense articles transferred into Syria or into the territory of a specified country without the consent of the internationally recognized government of that country . This funny language makes it illegal to transfer 'goodies' to Syria (agreed by Assad or not), or to Ukraine but only if it is not approved by the government of Ukraine. In addition to double standard in treating Ukraine vs. Syria, the above activity like Timber Sycamore, as described, does the very thing Russia is sanctioned for, regarding Syria.

The article also discusses Russian interaction with FSA, from the American perspective. According to Russian sources (TASS, Russian): The Russian army supports some forces of the "Free Syrian Army", which conduct offensive operations against the "Islamic State" , told the press secretary of the president of Russia, Dmitry Peskov. Some 5000 fighters are said to be involved ('and numbers growing'), with Russia providing some air support, supplies and ammunition. Exact groups involved were not specified. This appears to be an attempt to create their own 'moderate opposition' version and counteract US efforts, not exactly a diplomacy or 'elite level trolling'. (As somebody said, opposition is moderate as far as it believed to be controlled; thus US controlled opposition does not have to be the same as Russia -controlled opposition, despite making an even messier situation).

One of the photos is at least 2 weeks old. Similarly themed publication show an arsenal of weapons, communication equipment (Thuraya satellite communication, a drone, etc), and a video fragment, Daily Mail, July 28, 2016.

Several sources say the training given to Syrian rebels consisted of guerrilla attacks and targeted assassinations. I wonder what rebel group would use or need this kind of tactics. Actually these are the terror tactics used by Al-Nusra Front.

Nato has been giving similar training to Ukrainian reconnaissance and sabotage groups.

Despite cancelling their ‘rebel’ training program, the US has now airdropped 50 tons of ammunition for smalls arms, along with grenades, into the ISIS hotbed of Northern Syria.

The 50 tons of supplies were airdropped into Al-Hasakah province, home to Syrian Kurds, Arabs and a minority Assyrian community. ... "All the pallets reached friendly forces," the official said, adding that the drop "looked similar to what we did in Kobani."

According to Van Linge's Situation in Syria map, ISIS has minimal presence in Hasakah (northeast corner), but there are some government-held areas and even areas of joint Kurdish-government/loyalist control (like in the capitol, and Qamishli on the border). Otherwise it's held by Kurdish YPG militias, not in cooperation with FSA as is the case in Kobane. This is interesting given the Kobane precedent, where weapons were delivered to FSA and not Kurds, to avoid rifling Turkey (mentioned in above report). The likely recipients this time will be YPG, depending on where, either to push ISIS south or to attack the last government-held areas.

Moslem said “These weapons have been given not only to us but also to the Arab groups we act together. ... PYD co-chair lastly stated that operations against Raqqa and Jarablus are on the table and that they are working only for the timing of the operations at the moment. He added that Russia would be positive about the operation.

Both mentioned cities are well to the west, adjascent to areas of joint PYD-FSA control, so the pattern is not much different. Still, Turkish Prime Minister Davutoğlu's threatened that “we could intervene (against) the PYD”, to which Moslem responded they would defend themselves if attacked by Turkey, but had no plans to attack them or transfer weapons to the PKK.

A day later, the YPG spokesperson Redur Xalil released a statement saying that Saleh Moslem doesn't speak for the YPG and hasn't detail knowledge of military operations. The US, he says, "knows to who they sent weapons", likely referring to US statements insisting that "Arab groups" had received the ammo. Curiously on the same day, a new coalition of YPG and some regional Arab groups was announced and named Syrian Democratic Forces. In their founding declaration they thanked the US-led coalition for their support.

Moved to US military action against Syria

US needs a new strategy?

With Russia in Syria, a geopolitical structure that lasted four decades is in shambles. The U.S. needs a new strategy and priorities.

it is preferable for ISIS-held territory to be reconquered either by moderate Sunni forces or outside powers than by Iranian jihadist or imperial forces.

For Russia, limiting its military role to the anti-ISIS campaign may avoid a return to Cold War conditions with the U.S.

US has three options. The first one is to do what American hawks, including Senator John McCain, New Jersey Governor Chris Christie and some other Republicans are advocating. They essentially urge to enforce a no-fly zone over Syria and shoot down Russian planes if they violate it. The second option is to stand aside and see what Putin could accomplish with his allies. The third one, according to the Professor Emeritus of Russian Studies and Politics at NYU and Princeton, is to join Russia. Cohen sees the third option as the best choice for the Obama administration

France and its allies have agreed on the need for a "precise timetable" for the departure of Syrian President Bashar al-Assad as they met ahead of international talks, Foreign Minister Laurent Fabius said -Daily Mail, 28.10.2015 --Resup (talk) 16:46, 28 October 2015 (UTC)

Exactly where Ford needs a certain effect, he conjures the right words, even when those words are the most opposite of true. As soon as he saw clear evidence in the July 31 attacks that the violent insurrection in Hama was really underway, he needed all the cover he could find to help the seeds take root. So as soon as there were armed gangs running streets and bridges in Hama, he became more vocal than ever about this being a regime lie, by definition.