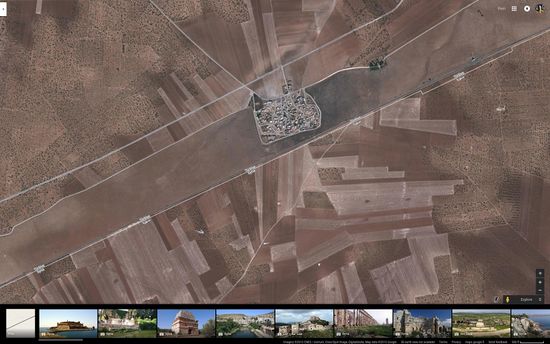 The Turkish-Syrian border ‎at Öncüler, some 20 km west of Jarablus.
The border between ‪‎Turkey‬ and ‪‎Syria‬ is almost as impregnable as the Inner German border between ‪#DDR‬ and West Germany. a 250 meters wide minefield separates Syria from Turkey proper. South of this minefield runs the old (Berlin to) Istanbul to Baghdad railroad on a 10 meters wide strip on the Turkish side of the border. South of the border Syrian fields extend right up to the railway.
This no-man's land and minefield was created to stop Kurdish "terrorist" from entering or leaving Turkey. The minefield extend from Hatay in the West to Iraq and beyond. If it can stop PKK it could as well stop ISIS and al-Nusra. 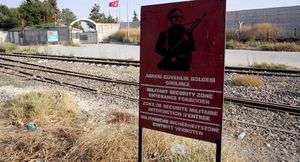 Turkish border as seen from Syria: first the railway, behind that military installations and minefields. 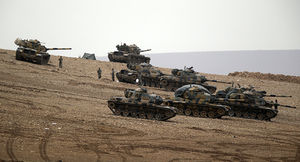 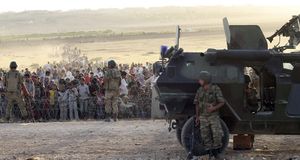 Turkish-Syrian border at Kobane on September 19, 2014 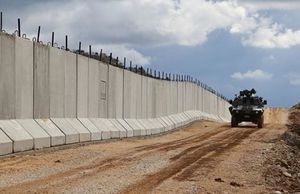 At any time if the United States truly wanted to strike an irreparable blow at ISIS forces, it could simply seal off the Turkish border across which the summation of ISIS’ supplies, fighters, weapons, and vehicles flow. By securing the Turkish-Syrian border to the north, and the Jordanian-Syrian border in the south, the United States could strangle ISIS out of existence in a month, if not sooner.

Turkey has put forward more than 1,000 pieces of equipment, including Leopard tanks, self-propelled artillery, missile launchers, armored infantry, armored demining equipment. According to the Greek agency ProNews, machinery was moved from the border with Greece, and the area of responsibility of the 1st Army of Turkey. In total, it is reported more than 1,000 pieces of equipment being transferred from Eastern Thrace to the Syrian border. About a quarter of the Turkish forces of the 1st Army is reported to redeploy to the borders of Syria. There is also evidence that a significant amount of engineering vehicles had been transferred as part of the forces deployment, including amphibious vehicle "Samur", which are used for pontoon crossings over water obstacles, which suggests that the Turkish forces are preparing to attack.

Report with videos,- shelling from Turkey

The Turkish president, Recep Tayyip Erdoğan, “believes in a radical Islamic solution to the problems in the region” and the “fact that terrorists are going to Europe is part of Turkish policy, and Turkey keeps getting a slap on the hand, but they get off the hook”.

“The Ministry of National Defense (MSB) and governorships had closed 200 km of the Syrian border. As TOKİ we have made a tender of 200 km and we are in preparation of other 400 km. “We have been continuing with our work of ‘putting up the wall’ for 15-20 days. We will have it completed the border wall of 700 km in five months.