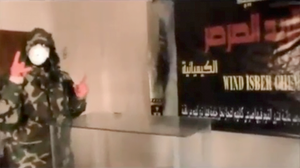 On December 5, 2012, as fears spread that the Syrian government was preparing to use deadly Sarin nerve gas, a rather convenient Youtube video appeared making a strong counter-point; "rebel fighters testing chemical weapons in Syria," as the story was broken by Syria Tribune. [1] The video shows an impressive array of various chemicals made by Turkish company Tekkim, and a masked rebel chemist apparently using some of the stock, apparently synthesizes chlorine, and gasses to death two rabbits in a plastic cage. Announcing the apparent launch of a "Isber (destructive/furious) wind chemical brigade," he then threatens Syria's Alawi community ("Nussayris") and supporters of the Syrian government with the same fate.

The video may be a recreation of a Cold War era US Army movie demonstrating the effects of VX nerve gas on three rabbits.[2]

The video's authenticity of it is not at all certain, but until it's clear the thing is fake, the implications are grave enough it's clearly worth a closer look. The following is incomplete. Please see the discussion page for some of the information being discussed prior to inclusion here.

The location appears to be a wealthy person's home, not a proper lab. It's not visibly clear at all where it is - Syria, Turkey, or elsewhere. The laboratory glassware on the Bunsen burner is labeled Lamtek, based in Istanbul. 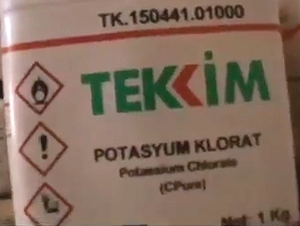 The vast majority or perhaps all of the chemicals shown are commercially produced by Tekkim, which is reportedly a Turkish company, most of them in one-kilogram plastic bottles of roughly cubical shape. It's not at all certain if all the containers are really full, or is some are perhaps empty props. The rabbits dying like they do, stretching out and convulsing, suggest there are at least some deadly chemicals in the room.

One unusual, smaller container of dark, reddish powder bears different markings (unreadable) that stand out in a possibly ominous way. This may be more of the first substance shown in larger jugs, labeled potassium permanganate, likely one of the two substances used in the demonstration on the rabbits.

It seems most likely that this demonstration uses chlorine as the deadly agent. It's apparently synthesized using the method where hydrochloric acid (a clear liquid) is added to crystals of potassium permanganate (a red-purple powder), which will produce chlorine gas. What's in the beaker is unclear, mostly off-frame, but seems to be dark colored. A clear fluid he handles carefully is poured into the flask. It expands violently into a dark, maybe purple-ish liquid, emitting a pale-colored gas and then settling down. The gas is too thin to be clear on the color, but at its thickest it seems yellow, perhaps a little green-ish, which is the color of chlorine. It sinks to the floor as soon as it's out of the flask; chlorine is heavier than air and would settle like that.

Chlorine turns back to hydrochloric acid as soon as it contacts water, and so it attacks moist tissues (eyes, airways, etc.). The rabbits' response is consistent; they don't like breathing it, and blink their eyes as if irritated. The white rabbit doesn't just blink but squeezes its eyes shut most of the time, and also seems to sort of sneeze or cough a few times, and might be bleeding from the nose. Eventually it seems they both die of suffocation. See talk page for more detail.

This seems to be the method of producing chlorine that was used in the March 16, 2015 incident in Sarmin, causing the red-purple puddles all over the alleged Taleb family home. But of course it's not what killed the babies shown dying on video, who don't seem to have been touched by chlorine. (see here for details.)

Press TV reported on December 23, as allegations of a rebel gas attack in Daraya came in, that there was at least one later video showing rabbits killed with contaminated water, adding a dangerous twist to their alleged capabilities and intent.

Foreign-backed militants have repeatedly threatened to use chemical weapons against the army and pro-government civilians in recent days. They have also threatened to contaminate Syria's drinking water supply in a bid to kill all Alawite Shias and the supporters of President Bashar al-Assad. The threat was made in a video posted on YouTube in which militants tested water contaminated with a lethal mixture on lab rabbits. The rabbits stopped breathing and their chests swelled shortly after drinking the poisoned water. The militants had earlier released a footage in which lab rabbits were killed by inhaling poisonous gas. [4]