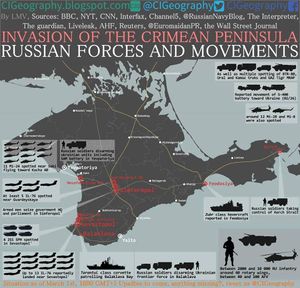 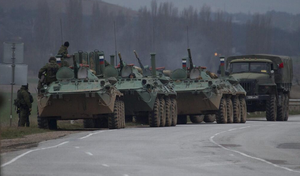 Russian armoured personnel carriers were seen near the town of Bakhchisarai, between Sevastopol and Simferopol on February 28.

Euronews, on March 1 shows footage of five about ten BTR-80 type armored personnel carriers on a road and stopped at a rest place somewhere in the area. The story makes no reference to Crimea, instead discussing the Duma authorization to use military force in Ukraine. The APCs carry clear Russian markings, so they cannot by definition be part of the "polite armed men in green" invasion force. It seems evident likely that this column was filmed somewhere in Russia, in the vicinity of Ukraine.

On the same day, ABC News reports: New Developments: Russian military moves in, convoys take control of Crimea. At 42 seconds in the video the same five APCs are shown. The newsreader declares in an agitated voice: They are unmistakable, Russian military vehicles. A convoy of Russian marines now operating on the roads of Ukraine's Crimea.

The video is interesting. In the live part of the broadcast the ABC correspondet in Simferopol manages to place himself right in front of a march of civilians carrying a 100 foot Russian flag. Editorial policy (or StatedDept/CIA directives?) however overrules reality on the ground and the hoax invasion story must be broadcast.

At 1m 35s in the video there is another fabrication about the Occupation of the Kharkov administrative building. -- Petri Krohn (talk) 08:46, 22 March 2014 (UTC)

This video shows 7 BTR-80's on the move south forward Simferopol at 8.12 am on Feb 27th. They are parked by the roadside just north of this AZS gas station. (Dashcam video gives coordinates and time.)

BBC publishes a photo of the BTR-80s seen on the ABC video saying they are in Bakhchisarai, i.e. on the road beween Sevastopol and Simferopol.

No, that’s not a mistake. On March 18, Crimea annexed Russia. There were no insidious schemes or imperial ambitions involved. There was, however, a spontaneously developing situation, together with the usual, everyday willingness of the Crimean bosses, who saw a unique chance in the Russian-Ukrainian crisis.
With the Ukrainian state on the brink of collapse after the flight of President Yanukovich from Kiev, the Kremlin authorities were understandably concerned to protect their interests and strengthen their position, but the most they counted on was turning Crimea into a second Trans-Dniestr enclave or Republic of Northern Cyprus – that is, into a de-facto Russian protectorate with formal independence. The presence in Crimea of “polite people” in green camouflage uniforms in no way prevented this scenario from playing out, any more than did the presence of NATO soldiers on the territory of the former Yugoslavia or of Turkish troops in Cyprus.
In Sevastopol and Simferopol, however, the authorities decided differently. Taking advantage of the confusion and disarray in Moscow and Kiev, the Crimean leaders drew up their own agenda. In the course of a few days they took several irreversible steps. The period before the referendum was cut to a minimum, so as to prevent both the Ukrainian and Russian authorities from getting their bearings. The Kremlin was presented with a gift it could not refuse. After having set the propaganda pendulum swinging, and amid a patriotic upsurge within Russia, our rulers were simply unable to say “no” when Crimea officially demanded unification with Russia. And so it happened.

But intelligence analysts were surprised because they hadn't intercepted any telltale communications where Russian leaders, military commanders or soldiers discussed plans to invade.[...]
Looking back, some U.S. officials now suspect Russia might have been trickling more highly trained units into Crimea in small numbers. But U.S. intelligence analysts didn't pick up any such indications before the takeover, officials briefed on the intelligence-gathering effort say.
[...]
Mr. Obama was told the operations could be launched with little warning.
But U.S. intelligence agencies didn't have corroborating evidence. Mr. Putin and other Russian leaders gave little away in internal communications picked up by the U.S. "We didn't have someone saying: 'Let's do this,' " one U.S. official recalls.
It isn't clear if Russian leaders deliberately avoided communicating about the invasion or simply found a way to do so without detection by the U.S. Another possibility: Mr. Putin made a last-minute decision to seize Crimea—and told almost no one other than those responsible for carrying out the invasion.
[...]
Inside Crimea, Russian troops exercised what U.S. officials describe as extraordinary discipline in their radio and cellphone communications. Remarks that were intercepted by U.S. spy agencies revealed no hint of the plans.
On Feb. 27, Mr. Pyatt sent an urgent note to Washington. A picture attached to his note showed Russian flags flying at Crimea's parliament building. U.S. officials didn't know if the forces that seized the building were Russian or a rogue unit of the Ukrainian police force involved in the crackdown on protesters in Kiev.
[...]
If Mr. Putin decided to launch a takeover, many U.S. intelligence analysts thought he would use troops participating in the military exercises. Officials now say they underestimated the quality of Russian forces inside Crimea.

Unlike previous interventions in Afghanistan in the Soviet era, or Chechnya and Georgia more recently, where Russian commanders relied on mass employment of tanks and artillery, the Crimea intervention featured fewer than 10,000 assault troops lined up against 16,000 Ukrainian military personnel...
Once Russian troops had moved to blockade Ukrainian military personnel in their bases, psychological warfare, internet/media propaganda, intimidation, and bribery were their main weapons to undermine their opponents' will to resist, rather than overwhelming firepower. Russian troops also displayed considerably discipline and patience during this phase. In addition, they appeared well equipped, boasting new personnel equipment, body armour, and light wheeled armoured vehicles.

Rogers said lawmakers on his panel are reviewing Defense Department and CIA reports issued before the Crimea takeover -- “one of them got it completely wrong; one at least laid out the scenario” -- to find out what was missed.

Going with the Crimea "invasion" story are stories of the allegedly huge military build-up on the Russian side of the border. It seems those allegations aren't particularly airtight as well. Depending on the development, this could use its own page, but as it is closely related to the Crimea "invasion" and part of the same hysteria, it'll fit here for the moment. --CE (talk) 16:55, 29 March 2014 (UTC)

In the past few days, Western media has extensively reported that Russia is positioning its troops in Crimea and along the Ukrainian border. Some of the major news outlets speculated that Russian troops “appeared to be concealing their positions, trying to cloak their equipment, and establishing supply lines.” Responding to those accusations, Russia’s Foreign Ministry issued a statement, in which it recalled four probes in March by foreign missions in Russia of regions bordering Ukraine. The ministry said that “even Ukrainian inspectors” agreed that “there were no major military activities being carried out.”

In a 200 mile trip along the border region, the only Russian armour on display in this flat landscape was of a much older vintage, and stood on plinths in town squares.

Yet at least overtly, the military presence is invisible.

During the critical days of the March 2014 Crimean citizens’ referendum vote to appeal for status within Russia, New York Times reporters then in Crimea reported the presence of Russian electronic jamming systems, known as R-330Zh Zhitel, manufactured by Protek in Voronezh, Russia. That state-of-the-art technology was believed to have been used to prevent the Ukrainian Army from invading Crimea before the referendum. Russian forces in Crimea, where Russia had a legal basing agreement with Kiev, reportedly were able to block all communication of Kiev military forces, preventing a Crimean bloodbath. Washington was stunned. 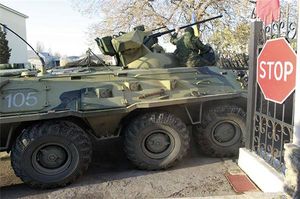 Is the BTR-80 with marking 105 part of some Russian "invasion force", or ex-Ukrainian that has switched sides and joined the Russian army?

As Russian troops invaded on Feb. 27, many people fled, with the flow increasing after a March 16 Kremlin-orchestrated referendum was held to ratify Russia’s seizure of Ukrainian territory.
Interesting. I thought the "invasion" happened on March 1st. -- Petri Krohn (talk) 18:02, 28 March 2014 (UTC)

There are claims that there was a Russian "invasion" of the Crimea. I have yet to see any evidence that there are more Russian troops, other than those regularly stationed on the Crimea, involved. Sure the Kiev coup-government claimed that dozens of huge Russian transport planes landed but how come that there is not even one picture of them available? To me it seems that the troops usually stationed on Crimea, which include various Marine infantry and Marine special forces units ,who obviously also have the support of the population are quite sufficient to secure the island. No shots were fired and the Russian navy, one might argue, is simply securing the larger perimeters of its bases. 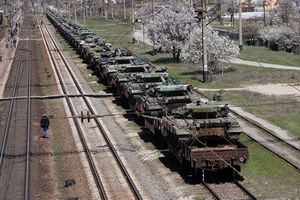 Ukrainian T-64 tanks in Crimea being loaded on trains at the Bakhchysarai railway station to be transported to mainland Ukraine, April 1, 2014

The number of Ukrainian forces (18,000) on Crimea was greater than the number of Russian forces (15,000). It is claimed that 3000 troops have elected to return to Ukraine while the rest have joined the Russian military or chosen to stay on the Crimea.

The Ukrainians were in possession of a large amount of heavy armor. (I have seen none of this on the Russian side.) The Russians are now loading this armor on trains and sending it to mainland Ukraine.

The majority of Ukrainian soldiers willing to continue serving in the Armed Forces of Ukraine have left Crimea leaving behind some 400 people responsible for combat equipment withdrawal.

It is likely, that if the Ukrainians forces had wanted to resist, they would have been superior to Russian land forces on Crimea, even if the local population had sided with the Russians. -- Petri Krohn (talk) 14:32, 3 April 2014 (UTC)

The Kryminform news agency, citing an unnamed local police source, reports shooting came from a house under construction opposite the center and targeted Crimean self-defense units as well the military center itself.
“Earlier today self-defense units were informed that a group of armed men had been discovered in a partially inhabited building,” a source from the ministry said. “As they were taking measures to check, self-defense units came under fire. One man was killed, one wounded,” the source explained, adding that shooting came “in two directions from one spot”.

"And until Tuesday 18 March, when a group of pro-Russian gunmen attacked a small Ukrainian army base in Simferopol, killing one officer and injuring another, it was entirely bloodless."
Wasn't this the provocateur sniper from Lvov?

Auslander on Vineyard of the Saker

Russian soldiers DID NOT TAKE KRIM RADA COMPLEX. Know that, understand that and live with that fact. Here's the short version of the security cam vid of the takeover, done because Right Sector had failed to take and burn Rada Complex the day before and had promised to 'return at dawn and burn it to the ground'.
Look at the weapons. Quite modern and state of the art in general. Uniforms and equipment? A hodge podge. Handling of weapons? Good. Professional? Absolutely not. Last, look at their feet and tell me what you see. 'Nough said. I personally know some of those brave men. I was not aware of the plan to secure Krim Rada.
When all this is over and their ID's are publicly known I will tell you who they are. I will hear you laughing all the way to Sevastopol, either that or your shocked 'Holy s//t. They did that?'