May 19. A week after the Fujairah attacks the Express reports: Now two SBS teams have joined UK registered oil tankers transiting in the Persian Gulf south through the Strait of Hormuz, where they will be tasked with monitoring Iranian activity around the island of Qesham - home to Iranian naval gunboats. Both teams will collate information as the ships move south through the Strait of Hormuz and into the Gulf of Oman, where it is understood they will be airlifted off by Royal Navy Merlin helicopters operating out of Oman.

It's almost impossible to place a limpet mine once a ship is underway. Other boats cannot come close enough without being spotted, and swimmers (including scuba divers) cannot keep up.

And noting the lenghth of time between the ships leaving port and the explosions - once in daylight any above waterline objects of that size should have been noticed by the crew - that would seem to preclude limpet mines having been attached whilst the tankers were in port.

It seems hard to believe that any mines could have been attached (and fixed with nails not just magnets) in the night before the hours of the attack, whilst the ships were underway.

The suggestion (here) that their may have been air to surface fire from a MQ-9 drone would seem to fit better with the timeline of events and with reports of the crew of Kokuka Courgaeous about seeing 'flying objects'.

The "likely limpet mine" shown on the photos from USS Bainbridge and the Iranians removing something from side of K/C a few hours after the Bainbridge had picked up the crew would still remain to be explained though, in the latter scenario. --Diagonal (talk) 14:19, 22 June 2019 (UTC)

A scenario where the alleged remnants of a limpit mine were placed on the hull of the Kokuka Courageous after the Iranian boat had left the scene is lent some credence by the time difference in the stills (see main page) There is no apparent sign of the 'remnants' in the earlier still. Admittedly the quality of the image is not that reliable --Diagonal (talk) 15:55, 24 June 2019 (UTC)

It may be doable, but without well-prepared tools it is quite noisy. E.g. dark inflatable boat with strong motor (not uncommon) catches up with a ship at night. Holes are drilled, some filler inserted (maybe plastic or whatever), and screws go into that. But usual electric drill on metal is probably too noisy. Hand drill, maybe, a bit slow and a bit harder but doable; there is still some typical sound, but it may be below engine and waves noise. Any sort of pneumatic/pyro action is even noisier, unless they designed a silencer, and all this would be extra-special. Melting metal instead of drilling will produce illumination or sparks, suppressing those is again something extra-special. Advantage of actually doing it in this kind of way is that something did stop those ships, and those ships would be inspected for damage by various non-cooperating parties, owners, insurers, and who knows who else. Any other damage will be noted, and eventually leaked to press. So, either staged or real, it probably comes to the same method of doing it, and with similar goal (false flag or deniability of blame) --Resup (talk) 23:22, 24 June 2019 (UTC)

The holes may actually be HILTI nails. But I still find it difficult to believe they were made while the ship was under way. One thing seems clear: whoever planted the mine did not intend the holes to be seen. -- Petri Krohn (talk) 18:02, 26 June 2019 (UTC)

Nail tools are quite noisy, like an airgun shot maybe, entering nail +some gas release. Here is a video giving some idea; another video, gun with silencer fastens to metal. I think drilling will be quieter. Of course one can attach it either way, if non-detection is not at issue (another thing, attaching something quite soft to thick metal is a bit tricky, nail can sink too deep into softer stuff or tear a hole in it) --Resup (talk) 01:04, 27 June 2019 (UTC)

Looking at better resolution photo, what's funny is that the through-hole is square, and head-hole is quite large, comparable to 1/2 inch (12.7 mm). That may indicate a nail (one can drill, fill, insert too, but nailing is a more straightforward explanation). I gather standard western powder-gun nails will have head of 8 or 9 mm (essentially barrel diameter), and a round shank of 3.7 mm. I have not seen square-shank Western powder gun nails or rivets. But funnily I see an Iranian (?. WTH is "NK Iran Selling "?) square shank version on Alibaba. --Resup (talk) 02:15, 27 June 2019 (UTC)

Some prior use of question marks

Some of the Iranian drones mentioned in sources may not exist, such as the Shahed-136, which was allegedly sent to Yemen in January, in order to target Israel.

Britain’s U.N. Ambassador Barbara Woodward identified the drone as a Shahed-136 UAV, telling reporters after the U.N. Security Council discussed the tanker attack behind closed doors that “these are manufactured only in Iran.” 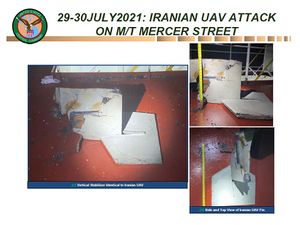 More details on US story. Articles state that this type of drone was used in the big Aramco attacks, but as far as I know that isn't right. The evidence from there was not for delta winged kamikazi drones. Yemen spokesman referred to Samad 3 drones as involved in that multifaceted attack. Those drones were likely deploying guided munitions over the targets rather than being of the kamikaze type.

The supporting evidence publicly available for the identification seems sketchy, inconclusive. However, the stabilising wing tip unit shown from the debris is similar that on the Yemeni drone featured here. Does the Yemeni drone shown match an Iranian Shahed 136, if the latter exist...?

Some of the Iranian drones mentioned in sources may not exist, such as the Shahed-136, which was allegedly sent to Yemen in January, in order to target Israel.

From Cassad - According to the British statement, the UAV-kamikaze tanker Shahed 136, which is allegedly produced only in Iran, was attacked. This is frankly not true, since these machines are actively used in Yemen and the Houthis have been using this machine for a long time (the Houthis both receive drones from Iran and assemble them in Yemen) for strikes against the Islamists in Yemen and Saudi Arabia, which is facilitated by the high range of use of this machine-2200 km.

Yes, the drone looks like the Yemeni drone. But Americans show no proof that the drone has ever existed in Iran or anywhere outside Yemen. -- Petri Krohn (talk) 20:57, 9 August 2021 (UTC)

The purported debris of a wing tip is at best a partial match for the delta wing drone. The recovered wing tip looks set further back from the rear fin part than we see when looking at the whole assemblage (same also I think, for Newsweek's Shahed 136). Given the damage the blast did to the iron deck one might question whether such light materials would survive the explosion uncharred and just intact enough to support an identification. --Diagonal (talk) 20:39, 10 August 2021 (UTC)
Non-charring: possible, impact fuse delay, may break into pieces before exploding. (No guarantees on what happened overall, from the couch) --Resup (talk) 21:22, 10 August 2021 (UTC)

This is more difficult than striking fixed target where one knows at launch where to fly. For a ship, you probably don't, unless somebody is watching; internet tracking service may be not enough or not reliable enough to hit a tower. So one may need to send communications back and forth, while even it flies at 10 km height it would be under horizon if over some 360 km range. It's not impossible but getting difficult, attenuation, over horizon, how much data needs to exchange and what bandwidth, while one may need drone to actively transmit. During Azerbaijan-Armenia conflict with drones use, it is said that there were rebroadcasting planes in international airspace, but here, probably no rebroadcasts ? Tracking ship transmitter? But that may be not too often or too accurate (or is it)? --Resup (talk) 12:17, 10 August 2021 (UTC)

Easy! Internet tracking sites only display AIS data sent by the ships over VHF wavelengths. If the tanker was outside the range of costal tracking stations, the position may still be picked up via satellite and available on MarineTraffic to paid subscribers. It could also be picked up by some Iranian ship or plane. The drone could also follow the AIS signal. From altitude it could pick up the target ship at a 150 km range.

AIS is intended for civilian use during peacetime. Civilian infrastructure breaks down during conflict. Israeli-owned ships will now stop broadcasting AIS when passing the Strait of Hormuz. Iranian coast guard will use the missing AIS as an excuse to board the ships. -- Petri Krohn (talk) 14:40, 10 August 2021 (UTC)

...but when I open marine traffic I can see some ships with locations updated hours ago , some updated minutes ago. Near Yemen, it says satellite and does not say when it was updated , at least in unpaid version. It also shows latitude with 4 digits after dot, this is about 11 meters, quite a lot (and possibly with a few minutes time delay...) . It needs to read tracking itself or else communicate with operator; satellite communications is quite directed, (1 GHz, 30 cm dish, roughly 45 degrees); can it intercept it, unsure --Resup (talk) 15:13, 10 August 2021 (UTC)

There was an initial report based on quotes to Al-Alam TV Network:

Citing informed sources, the al-Alam TV said that the attack on MERCER STREET was carried out by “resistance forces,” a term usually used to refer to Iran’s allies in the Middle East, in response to the July 22 Israeli strikes on al-Daba Air Base in the central Syrian governorate of Homs. SouthFront.

See Previous unconvincing MSM claims of Iranian Shahed 136 drones in Yemen. The approximate distance from Houthi territory to the ships location would be approx 1750km. Any drone would have to fly over Omani territory or skirt around its coast. This seems an unlikely scenario.

US-Israeli intelligence believe the drone was launched from ­eastern Yemen and directed by GPS towards the tanker before an operator took control for the final mile, directing the rocket via camera into the ship’s bridge.

That report from Al-Alam was mentioned initially by Fars, Al Masirah, maybe PressTv also. But I don't think it was corroborated independently of the single source of Al-Alam. --Diagonal (talk) 11:13, 9 August 2021 (UTC)

Citing informed sources, the al-Alam TV said that the attack on MERCER STREET was carried out by “resistance forces,” a term usually used to refer to Iran’s allies in the Middle East, in response to the July 22 Israeli strikes on al-Daba Air Base in the central Syrian governorate of Homs. SouthFront.

The first attack on the tanker caused only material damage but was followed by a second attack where the command and control tower was hit to cause human casualties.

Not really, but (Ukrainian?) UR FSE can be seen here and EX 76003 seems to belong to Kyrgyzstan's Fly Sky (it is pictured under Cargo Calculator, towards the end of the page. Those two things tags are on the twitt . It's a new airline, nothing seems to be about it of value

Some more on IL-76s with interesting histories. Ex76003 seems to be have been used often recently transporting supplies or equipment from Russia concerns, e.g. Russian PMCs deploying to the CAR. But its a murky market place. --Diagonal (talk) 14:07, 1 August 2021 (UTC)