From A Closer Look On Syria
< Talk:Alleged Chemical Attack, August 21, 2013
Jump to navigation Jump to search

This page tries to answer the central question of the Chemical Massacre mystery: what happened to the victims and bodies before they arrived at the hospitals and other collection sites to to be photographed and cataloged. Who found the victims? How were they extracted from their homes? How did the victims get dressed? How were they transported to the hospitals? Was everyone found in the dark of night, with nothing to do for the daylight hours?

Unless evidence of this rescue work is provided, we can just as well assume that the victims were hostages who were gassed in cellars and dumped at the hospitals by their killers. -- Petri Krohn (talk) 00:57, 8 September 2013 (UTC)

“People were screaming and asking for help. They had difficulty in breathing and seeing. There were many dead bodies on the ground. Some families were sleeping when the attack took place and all the family members died,” Al Aan TV reporter Mohammad Salah El Din told TRNS in an exclusive interview via Skype after visiting area hospitals. “I was shocked.”

Many of the victims were brought to area hospitals unconscious or dead, said Dr. Abo Akram, a director of medical field hospital in Erbeen, a Damascus suburb. Others gained consciousness after recovering from a “state of poisoning.”

Initial injuries were around ten FSA fighters, in adition to about ten civilians first found outside. Immediately hundreds of citizens, struck while asleep in their homes, began arriving at hospitals.

Doctors and activist report that peoples windows were open during the night, allowing large concentrations of gas to pour into homes.

Many civilians were found simply unconscious in the street. Mohammad Salaheddine, a journalist/activist based in Zamalka hospital at the time the victims began to arrive, says "the dead were loaded int large pickup trucks by the hundreds, and were taken to three large mass graves in Zamalka, Ain Turma, Arbeen.THe bodies were place inside and dirt was bulldozed to bury them." Mohammad claims to have seen "eight trucks piled with around 400 bodies" being taken to these graves himself.

Someone supposedly died "while he was rescuing people in Zamalka after the Aug. 21 chemical attack."

In the video with evidently planted bodies at the Zamalka construction site the guide describes the rescue work: (at 4:28)

Are there still inhabited houses? --Yes, sure. Between yesterday and today we found more then 40 corpses and we are still searching.

Could it be, that more of the bodies were discovered in this half-abandoned neighborhood? If so, were that the regular residents? Who would want to live here? -- Petri Krohn (talk) 03:29, 9 September 2013 (UTC)

The Role of Basements

In an early activist video with helpful English subtitles, A statement from Jobar's Medical Point regarding the chemical attack, an opposition doctor announced gas attacks on Jobar and Ain Tarma areas alone, with "massive" casualties that used up all their supplies. At about 3:45, he explains the mistakes people made, which made it worse for responders (some of who died from all this, leading him to sob). Many people put themselves in basements to escape the gas, which sunk down in concentration and killed them. They should have gone upstairs instead, and he suggests an education campaign to make sure people know that next time.[1] --Caustic Logic (talk) 11:39, 30 August 2013 (UTC)

Ben Hubbard and others filed a report for the New York Times, based on interviews with numerous opposition locals, including rebel doctors, perhaps including that guy but given as plural, who made the same claim.

According to local doctors, some people took cover in basements, where the gas settled and suffocated them. Medics and photographers who had become accustomed to rushing to the site of attacks arrived too quickly, succumbing to the gases themselves.[2] --Caustic Logic (talk) 11:39, 30 August 2013 (UTC)

More mysteriously, the Jobar medic mentioned some people started fires while in the basements, I guess to keep warm in the August chill, leading to "undesired consequences" in mixing the toxic gas fumes with "fires and burning tires." Because of "the ignorance of some people," he says, a significant number of people wound up "putting tires on fire," which "added insult to injury," as any idiot could predict. [1] --Caustic Logic (talk) 11:39, 30 August 2013 (UTC)

These allegations make little sense. If people truly did wind up gassed in basements that were also choked with the smoke of burning tires, it stands to reason someone else put them in that position. Who would subject themselves to that? This is a chilling possibility cosidering to two earlier massacres:

Similar concept, same area - Moadamiya al-Sham, where the U.N. investigators just went: SOHR Facebook: Two children are starved to death. Each one gets his own one post with photo (plus one to a new article at the website)

Two children (aged 3 and 7) from the city of Mou'adamiya have died of Marasmus, which is caused by severe malnutrition in children. This was caused by the severe lack of foodstuffs and aid, as well as doctors treating them were not able to receive required immediate medicines . the rebel held parts of Mou'adamiya are under an intense siege by the regime forces.

And as is often the case, some civilians in rebel-held areas are under a more intense kid of siege altogether. The general seige is blamed, but we don't know who these kids are. And if they're significantly more starved than others, one thing is shown: Cruel people who don't share surrounded them immediately. Sharing is allowed under seige and most people don't starve, when food usually is allowed just fine. If rebels aren't running it. As I said in a comment there (not deleted - another one was):

This is most plausible under captivity. Locked in a cellar you can starve someone easier than with a food embargo on a town. Just like it's easier to get hundreds to die from poison gas if they're confined. Compare these kids to other Moadamiyans and I think you'll see the town at large isn't starving this bad, so why are these two? Same reason for the gas? (to blame someone else)--Caustic Logic (talk) 13:32, 1 September 2013 (UTC)

A doctor from the town of Kafr Batna said he rushed to his clinic soon after the attack and found 100 patients.
“We had men, women and children, all of them choking and having trouble breathing,” said the doctor, Sakhr. “Some of them had foam coming out of their mouths and nostrils and many had lost consciousness.”
By the end of that day, Dr. Sakhr of Kafr Batna said, 16 of the 160 bodies collected at his clinic had not been claimed. Volunteers took the bodies to a nearby graveyard, photographed their faces one by one, and buried them in a mass grave.

Victims died in hospitals, not in their homes 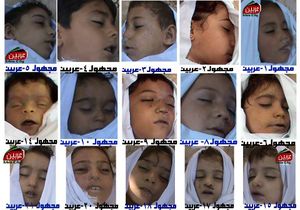 Unclaimed children who died at the Erbin hospital

This has been evident in multiple videos; live victims arrive at field hospitals, receive treatment and still end up dead in the morgue. This is inconsistent with sarin that would more likely produce instant death. There is effective treatment for sarin poisoning, the rebel paramedic on video testifies that tens of thousands of doses of atropine were used. On the other hand, there does not seem to be any effective treatment for chlorine gas poisoning; it destroys the lungs and causes a slow death by asphyxiation.

This NBC News story confirms the finding, the victims died in the hospital

The hospital in Arbin, in east Damascus, took in 600 patients after last week's poisoning and officials there said 110 of them died. Thirty-five, more than half of them children, had not been claimed.
"We still have this infant. Her age may be about one month old, and we put her as Unknown No. 14," Akram told independent filmmaker Humam Husari, who provided the footage to NBC News.
The little girl had died in the arms of volunteer paramedic Abu Ahmed, who described how he tried in vain to save her life.

Interestingly, the story claims that the Erbin hospital recieved 500 patiens who received treatment and survived. I do not think we have ever seen video of these survivors. Do we see anyone at a hospital getting better? Being relased from the hospital? Being reunited with their families on August 21? The footage we see seems to exclusively focus on children who end up dead; it is almost as if the cameraman is precognitive, he knows who will die. -- Petri Krohn (talk) 16:57, 27 September 2013 (UTC)

Any hospital operating in a war zone would have to have effective triage. It has been noted by a few observers that no signs of any triage process exist. Patients (and bodies?) just mysteriously appear on the hospital floor. At a minimum the the triage process should prevent dead victims from being admitted as patients to the hospitals.

The missing triage is directly linked to the question of were the victims died, in the field or at the hospital as discussed above. The reports indicate that all known victims died at the hospitals – or at least were pronounced dead at the hospital and later listed as "patients". There are no reports of the dead being transported directly to the morgues, either right after attack or following daytime recovery work in the affected areas. (The bodies in the Zamalka ghost house are dumped directly into a pit.)

It may be difficult to tell in the field, if a victim of an unknown chemical is really dead. On the other hand, all the victims we see receiving treatment at the hospitals are clearly alive. -- Petri Krohn (talk) 22:13, 27 September 2013 (UTC)

I did not know the White Helmets were involved in staging the 2013 massacre. (Actually they did not exist then.) This is also the first time anyone has mentioned any Search and Rescue work done in 2013. There was never any evidence that any dead people were found in their homes. -- Petri Krohn (talk) 01:42, 3 May 2018 (UTC)