copied from Talk:Syrian Government Forces#Alleged chemical weapons use by the rebels, Apr. 7, 2016

QUESTION: What about the reports that Jaysh al-Islam was involved, who have taken responsibility for this, and they’re one of the parties that have a delegation in the intra-Syrian talks?

MR TONER: Yeah, and I apologize. I just don’t have any information on that at this point. I’d have to look into it.

"Later, Lebanese Hezbollah fighters said that they were also attacked by chemical weapons during the night from Sunday to Monday, when terrorists attacked the settlement of al-Yis in the south of Aleppo."

"The Syrian Kurdish militia YPG confirmed information about the use of chemical weapons by Islamist militants, adding that they operate under the patronage of Turkey. According to the militias, dozens of civilians suffered as a result of the attack"

Video 1 is apparently filmed earlier than video 2. The movement of the smoke is expanding, seeming to expand upward more than chlorine would. Also, this is not quite chlorine's color. This is almost golden yellow or orange-yellow, while chlorine is yellow-yellow-green. --Caustic Logic (talk) 14:39, 16 August 2018 (UTC)

Video 2, apparently filmed later, show the plume continuing to rise (bottom frame is later). This can hardly be the accepted chlorine, which is considerably heavier than air, and would be settling more, even with an initial explosive expansion. And that's just by weight. The color is wrong too, and no one reported the right smell. --Caustic Logic (talk) 14:39, 16 August 2018 (UTC) 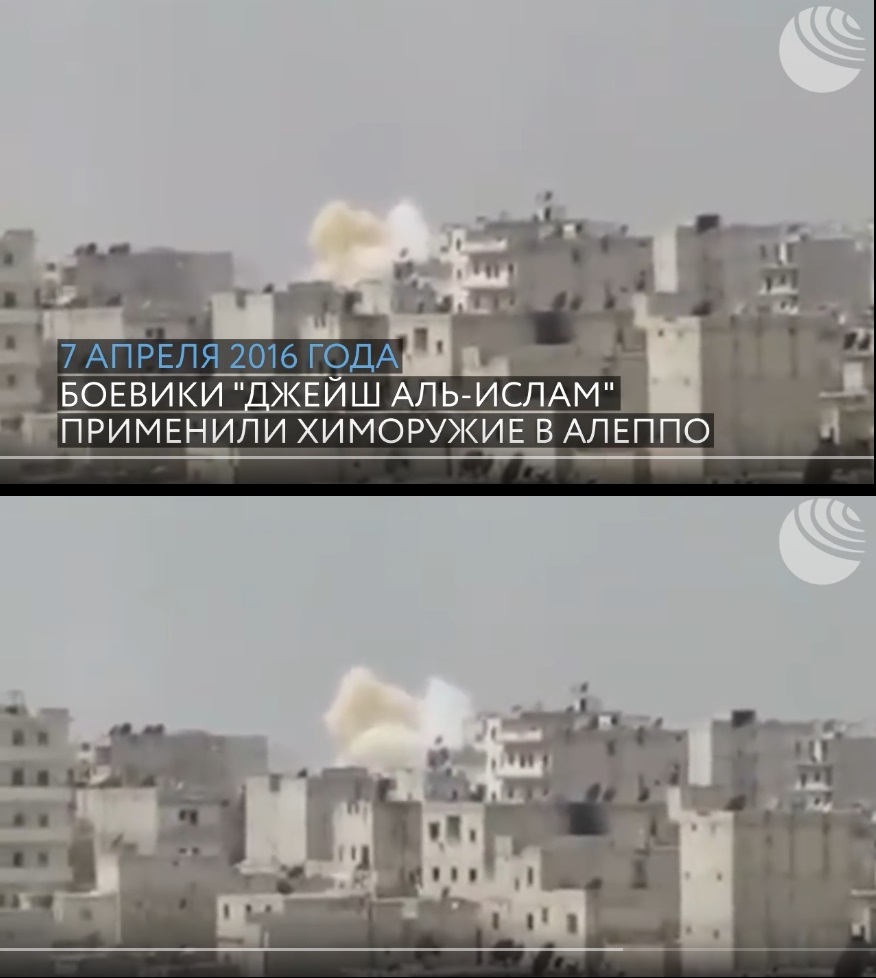 Symptoms/signs ... these will be of interest. The breathing problems seem too general to say much. The photos show maybe a blast and rubble in one case (little seen) and the other serious eye problems and blood all over his face ... also too vague to call but possibly from chlorine. It turns to acid on contact with water (eyes, lungs, etc.) and dissolved tissue. Worth more investigation. --Caustic Logic (talk) 14:45, 11 April 2016 (UTC)

The effects of chlorine gas are important and mysterious in a few important cases in Syria. We saw in Sarmin a year ago chlorine with almost opposite the usual effect, in the Ghouta attack sarin that sometimes kills like chlorine (we think) and in the "Caesar" photos, Assad torture chambers that kill like chlorine gas chambers. JaI is in the frame for both Ghouta and the photos. The latter is most interesting at the moment, as I work on a report about it. But I'm still lacking visual examples of what chlorine does to make it more clear (to the reader and to me). I hate to see that it happened, but seeing how it happens - in an extreme case of blood coughing and eye damage - that could be useful. --Caustic Logic (talk) 14:45, 11 April 2016 (UTC)

https://ria.ru/syria/20160407/1404681085.html "yellow smoke with a strange smell formed." Chlorine's smell, usually, is not perceived as terribly "strange." But that exact word is the second most frequent, after "foul," to describe impure sarin, or whatever gets smelled in attacks where sarin turns up.

"One of the Red Crescent doctors told the agency that four victims of gas poisoning were admitted to the hospital. They suffer from convulsions, spasms and vomiting - all these symptoms indicate a poisoning with chlorine compounds." Actually these are not chlorine symptoms, and more like nerve agent ones.

On April 7, activists inside the neighborhood released video of four victims of the alleged attacks being treated with respirators. In a statement, a local administrator in the Kurdish Red Crescent described symptoms among the victims including shortness of breath and nausea that he said seemed to be the result of “internationally prohibited gases,” perhaps chlorine.

The smell of chlorine is clear, not mentioned. Nausea itself is far more consistent with a nerve agent than with chlorine. (vomiting can occur, but secondarily - from excessive coughing). But the details here are less clear, inconclusive. Key indicators of sarin-type poisoning, like miosis, are not reported.

Dan Kaszeta, a former U.S. Army Chemical Corps officer with 25 years of experience in chemical defense issues, told The Daily Beast that it was impossible to assess the allegations of chemical weapons use based on the videos posted from al-Sheikh Maqsoud. “Unfortunately, none of these [videos] are conclusive,” he said.
“Phosgene and Mustard [gas] are pretty well ruled out because they take many hours after exposure,” Kaszeta continued. “There’s no reason why chlorine couldn’t be the culprit. However, there are very few ways, by video analysis, to tell the difference between chlorine exposure and any of hundreds or thousands of other respiratory irritants, including normal smoke and hexachloroethane smoke, which is used in military smoke grenades.”

A CDC pagee explains this causes irritation of the skin, eyes, and respiratory tract - all similar effects to chlorine. It's possible the same was used a month later, if that's what a yellow phosphorous cloud looks like.

Not that this page was ever guaranteed to be an exhaustive source, but we're way behind. Jaish Al-Islam's apparent admission was later walked-back. Is that plausible? What's with their story's strange similarity to what they should be talking about right after credible (Kurdish) CW allegations of chemical use?

Consider, as reported, Al Masdar had to note: "While Jaish al-Islam did not specify which forbidden arsenal the group was referring to, this statement comes as rebels reportedly carried out a chemical gas attack through shelling on the Kurdish-held Sheikh Maqsood district in Aleppo yesterday." Their Wikipedia article includes later statements that this was a misunderstanding - he just meant their commander modified some grad rockets non-chemically and was ounished for that, just then. The Daily Beast is cited. Will need to review that, but saving it here. Maybe, if a modified grad was used, they're saying HE changed the rocket around. WE don't hand these out ready made. --Caustic Logic (talk) 12:32, 9 August 2018 (UTC)

From the Daily Beast article:

explanatory tweet: https://twitter.com/MajdiNema0/status/718410175934263296 Auto-translated: "Unauthorized weapons are "Grad" models that are not suitable for guerrilla warfare, and are not internationally banned as the system and its clients are trying to promote." It says IslamAlloush status as it's loading, then switches to (his new ID?) MajdiNema0, in Istanbul, with the Toran Center.

So to accept this, the publicized decision to punish a guy for using the wrong ("banned") rocket, which happened to come exactly as they were accused of using banned chemical weapons, was … a total coincidence? Not an admission they regretted, nor a purposeful distraction? Maybe the latter? Their timing certainly helped create the impression they lament. And to accept this, they never did address those specific chemical weapons claims, to accept or deny, they just went off on some strange tangent instead. And then deny ever using CWs or doing anything wrong, in a blanket sense. --Caustic Logic (talk) 12:37, 15 August 2018 (UTC)