27 Mar. Close to midnight Israel attacks several targets they claim are Iranian weapon depots on the outskirts of Aleppo with air-to-surface missiles fired from jets outside of Syrian airspace.

23 Mar. The SDF declares "the military victory over ISIS after six years of continuous war and great sacrifices."

22 Mar. Interdepartmental coordination headquarters of Russia and SAR issued a statement "On measures to eliminate the Rukban camp for internally displaced persons" , seeking to close the camp while working with tribal leaders, US and Jordan (robo-translation).

20 Mar. All over the region, people are celebrating Newroz, the start of the new year/spring at the astronomical spring equinox.

Following the resignation of long-time president Nursultan Nazarbayev, the parliament decides to rename the capital city of Kazakhstan and host of Syria talks from Astana to Nursultan.

19 Mar. The SDF says it "fully" controls the ISIS "tent city" in Baghouz now, but some gangs unwilling to surrender seem to hide on the banks of the Euphrates (pics and vids).

Russian defense minister Shoigu meets Assad in Damascus to discuss the fight against terrorism and other topics. According to the MoD, he also delivered a message from Putin.

18 Mar. Assad receives a high-ranking joint Iranian-Iraqi military delegation including the chiefs of staff of both armies to discuss cooperation in the fight against terrorism. 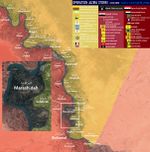 17 Mar. An SDF statement gives numbers about the Baghouz fight, but doesn't declare it finished. According to this, 29,600 ISIS members (incl. families) surrendered and 1,306 were killed, while the loss on SDF side is 11 fighters.

12 Mar. A joint Russian-Syrian statement again points out the grave situation in Rukhban camp and calls on the US to let the prepared convoys in. It mentions that without the cross-border efforts of the Jordanians there would be no water supply at all, and that satellite footage shows several new mass graves in and near the camp.

While "hundreds" of ISIS fighters have surrendered in Baghouz during the last 48 hours, the "endfight" is still going on.

11 Mar. According to Turkish AKP-friendly Yeni Safak newspaper, the US has interrogated 2000 ISIS fighters and given 140 of them new identities and passports. ISIS leader al-Baghdadi is in US custody according to the paper which opens the article with a picture allegedly showing him in a US military vehicle (of which ISIS has taken over plenty in the conquer of Mosul).

10 Mar. It looks like the remaining ISIS fighters under siege in Baghouz are finally preparing to surrender.

9 Mar. The Russian MoD again complains that the US is sabotaging the Syrian-Russian attempts to evacuate the civilians willing to return home from al-Rukhban camp where the conditions are "disastrous".

8 Mar. Joint Turkish-Russian military patrols along the border of the Idlib deescalation zone start today with the Russians patrolling the outside and the Turks the inside.

7 Mar. The UK MoD is ridiculed for its claim, answering a FOIA request, that in their air attacks against ISIS only a single civilian died while 4,013 "targeted individuals" were killed and 302 wounded.

5 Mar. Andre Vltchek publishes his report from the Idlib frontlines.

3 Mar. Russian MOD via TASS (Eng.) (Rus): US forces in Syria bar entry to convoys sent to transport refugees from the Rukban camp to their pre-war locations.