30 Apr. 'Netanyahu To Address Israel With 'Dramatic News About Iran' Monday Night', and this is what he had to say 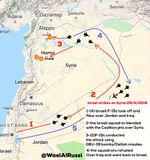 It is reported in pro-Russia/loyalist sources that in the early morning hours, Israel fires around a dozen missiles on three targets in Hama and Aleppo where Iranian-backed militias are stationed. There are several dozen casualties, suspected among them Iranian servicemen. Israeli commenters suggest a warehouse explosion, ground attack, with some not excluding possible Israeli role. Pentagon spokesman denied US or coalition role in the attack; Israeli comment so far is not provided. Iranian source denies their forces were harmed.

29 Apr. Over the weekend the SAA and its Palestinian allies have overcome the ISIS defenses in southern Damascus and are on steady advance towards Yarmouk Camp.

Meanwhile, the Tiger Forces are on the way to the Rastan pocket, where a new offensive was announced, bringing several rebel groups to surrender in advance.

According to SANA and Al-Masdar sources, loyalist forces on the eastern bank of the Euphrates have taken over a couple of towns north of Deir Ez-Zor from retreating SDF forces in a surprise offensive. In the afternoon they reportedly retreat back to their bridgehead. The last time such a "crossing" happened, it led to larger confrontations with "coalition" air support.

28 Apr. The self-administration of Rojava releases a detailed report about the policy of "Turkification" pursued in Turkish-occupied Afrin canton.

A meeting of the foreign ministers of Iran, Russia and Turkey in Moscow ends with a joint statement.

26 Apr. At a briefing at the OPCW headquarters in The Hague, Russian envoy Alexandr Shulgin presents a number of alleged witnesses to the staging of the Douma chemical attack, including the boy Hassan Diab who is seen getting hosed with water in the hospital video circulated by the White Helmets (video of full briefing).

25 Apr. Russian MoD shows what it says are fragments of Western missiles shot down over Syria. RU MoD (text, video) shows fragments, gives numbers update (13 hits in Barza center), and some details on missiles recovered (claimed to be 1 tomahawk and 1 high precision aerial launch missile; that tomahawk warhead is said to be on one of the photos.).

The Narcotics Department busts a car with 90,000 Captagon tablets in Homs province.

24 Apr. It is said that Russia repelled another drone attack on its airbase in Khmeimim.

The evacuation of the eastern Qalamoon militants and their families is finished with a last batch of 35 buses heading north. A large cache of weapons is left behind.

22 Apr. A first batch of 30 buses leaves the eastern Qalamoon in northern direction. In total, between 5 and 6 thousand people are about to be evacuated.

The militants in the Rastan pocket continue to refuse any deal with the SAA.

21 Apr. The OPCW fact finding mission finally makes it to Douma and visits "one of the sites" of the alleged chemical attack to collect samples.

The militants in the eastern Qalamoon hand over about 50 heavy military vehicles to the SAA as part of the peace deal made there.

Syria and the Russian Federation's Republic of Crimea sign an economical cooperation agreement.

Fights over the Rastan pocket are going on with fierce resistance by the "rebels" and only moderate success by the SAA.

20 Apr. Firat News Agency publishes a history of US support to the Turkish military.

The scientific service of the German parliament finds that the FUKUS strikes on Syria clearly violated international law, dismissing the British attempts at legitimization and contradicting statements by Angela Merkel who called them legitimate.

The OPCW fact finding mission has still not visited Douma.

18 Apr. U.N. team fired on in Syria while visiting suspected chemical sites, which may delay or jeopardize inspections. It was reported and denied that a Russian officer was wounded, and it is now said that a Syrian guard was lightly wounded and Russians were not on the scene of the incident.

16 Apr. In the afternoon, Israeli Defense Minister Abigdor Lieberman states that his country will not be limited in its actions in Syria by anyone, including Russia. At late night usually trustworthy sources report that Israel attacks several SAA air bases with missiles fired from jets over Lebanon and from northern Israel, including Dumayr airbase where Russian forces are known to be stationed. All objects are said to have been taken down by air defense. In the morning, neither Israel nor USA confirm the attack which some claim to be air defenses false alarm.

As what he thinks is the first Western journalist, Robert Fisk makes it to Douma and is allowed to wander around freely - finding no trace of and a lot of skepticism about a chemical attack. Around the same time, an American TV team does the same with the same results.

The SAA takes a couple of villages from Al Qaeda in an offensive in the east of the Rastan pocket that started yesterday. In a second afternoon advance, five towns and several strategic positions fall to the SAA.

Due to continued Turkish machinations with the water supply, the regions on the upper Euphrates are limited to 12 hours of electricity the day.

At a special meeting of the OPCW, Russian Ambassador Shulgin tells the group that Russia has "irrefutable evidence" that the alleged Douma chemical attack was staged.

15 Apr. The militants in the remaining East Qalamoon pocket accept a bus ride to Idlib.

The SAA concentrates more and more troops around the ISIS-controlled Yarmouk camp in southern Damascus.

14 Apr. A lively UNSC meeting takes place which ends with the rejection of a Russian draft resolution condemning the obvious violations of the UN Charter FUKUS committed (live recordings by Ruptly,Russia 24, Washington Post).

According to Lavrov, a Swiss laboratory has determined that the OPCW samples of the Skripals show the usage of BZ in addition to a "Novichok" family substance.

The OPCW fact-finding mission to Douma continues deployment and arrives in Damascus in the afternoon.

The Syrian Army General Command declares the eastern Ghouta to be free of terrorists.

13 Apr. Russian defense ministry spokesperson Konashenkov tells the press details about the staging of the alleged chemical attack in Douma.

Syrian UN ambassador Ja'afari tells the press details about how "rebels" got hands on chemical weapons.

British Maj.-Gen. Jonathan Shaw CB CBE, former commander of Multi-National Division (SE) in Iraq in 2007 told Sky news that Assad had no motive to launch a chemical attack at this time at that place; his comments were interrupted.

12 Apr. Trump tweets: Never said when an attack on Syria would take place. Could be very soon or not so soon at all! In any event, the United States, under my Administration, has done a great job of ridding the region of ISIS. Where is our “Thank you America?”

Congresswoman Tulsi Gabbard asked extremely pertinent questions to Secretary Mattis about the legality of an attack on Syria. The response was very cautious.

11 Apr. Russia issued a NOTAM to close an area next to Syrian territorial waters to conduct missile exercises on 11-12, 17-19 and 25-26 April, 10.00- 18.00 Moscow time. Opponent's unauthorized strikes shall be planned accordingly. Russia called chemical attack in Ghouta a staged fake and expressed hope that irresponsible military adventures will be avoided altogether; the latest by Peskov. Putin discussed Syrian situation with Netanyahu and urged to refrain from destabilizing moves. Shamanov(MP, Col.-Gen, ret.): there are direct Russia-USA contacts, at the level of chiefs of staff (his earlier warning here).

Russian Navy said to take off Tartus base to sea, in anticipation of possible strikes (ISI satellite photos)

Russian military police will be deployed in Douma from 12 Apr.

Trump tweets: Russia vows to shoot down any and all missiles fired at Syria. Get ready Russia, because they will be coming, nice and new and “smart!” You shouldn’t be partners with a Gas Killing Animal who kills his people and enjoys it!

Forty minutes later he tweets: Our relationship with Russia is worse now than it has ever been, and that includes the Cold War. There is no reason for this. Russia needs us to help with their economy, something that would be very easy to do, and we need all nations to work together. Stop the arms race?

Russia is to increase Navy deployment off Syria-Rusvesna

Nikki Haley with Dr. Morad at the UNSC

10 Apr. As anticipated and warned in advance, at consultation meetings as well as seconds before the vote, Russia blocked the US-lead UNSC resolution on 'the new attribution mechanism for the chemical attacks in Syria' (Russia and Bolivia against, China abstained). Russian draft failed as well (6 for, including China, Kazakstan, Bolivia, 7 against, including all the West, 2 abstentions).

The third draft to condemn chemical weapons use and support the fact-finding mission, without immediately establishing an investigation mechanism, was rejected as well, with 5 in favor (Bolivia, China, Ethiopia, Kazakhstan, Russia) to 4 against (France, Poland, UK, USA), with 6 abstentions (Côte d’Ivoire, Equatorial Guinea, Kuwait, Netherlands, Peru, Sweden). The third draft was tabled by Russia, moved to consultations with the meeting suspended by Sweden, but ultimately failed. The three draft summaries are here.

NBC News: Russia has figured out how to jam U.S. drones in Syria, officials say (and is doing so according to the report)

T4 airbase and its broader surroundings

9 Apr. Russian MoD (TASS): two F-15 aircraft of the Israeli Air Force, without entering Syrian airspace, struck the T-4 airfield with eight guided missiles from the territory of Lebanon. Western part of the airbase where Iranian forces are located was targeted; photo report claims moderate damage. Two "US officials" talking to NBC say Israel informed the US in advance of the attack.

Almasdar news: 'Cruise missiles' target T-4 Military Airport, west of Palmyra, in eastern Homs. Loud bangs heard, anti-aircraft systems activated. (AFP),(BBC). Pentagon did not confirm or did not comment; White House did not confirm -TASS. US officials denied -Reuters. SANA: 8 missiles shot down, there are killed and injured in the attack.

The Russian UN ambassador Nebenzia says at the UNSC meeting that the alleged chemical attack in Douma is "no doubt" staged and invites the OPCW to visit the scene on the ground (of which Russia and Syria are in control) as soon as the next day.

Elijah J Magnier:The war is Syria is over but the US forces and the consequences of their dangerous presence remain.

Emanuel G May: Battle of Qalamoun about to start. Twitter Report and Map

4 Apr. SMM Syria: US SOCOM UNDER MASSIVE ATTACKS IN SYRIA - Multiple vehicles destroyed. Many US casualties after attack by pro-Government forces starting April 2 to now.

3 Apr. The SAA supported by the Russian Airforce apparently starts an offensive against the ISIS desert pocket between Palmyra and the lower Euphrates.

The resettlement of "rebels" from Douma to the north is in full swing.

According to SOHR, "ten of thousands" of Faylaq Al-Rahman fighters and their families, who were evacuated from Jobar, Ain Terma, Arbin and Zamalka, have over recent days arrived per bus in Afrin, where they settle in the homes of the (mostly Kurdish) people who fled the town during the Turkish "Operation Olive Branch".

Iran, Russia, Turkey: While the defense ministers meet in Moscow, the presidents meet in Ankara to discuss Syria. The meeting ends with a joint statement by the presidents.

2 Apr. The last of the PKK-affiliated militias who saved the Yezidis from ISIS in 2014 leave Sinjar/Shengal after a ceremony on the mountain (interview with a commander).

The SAA takes over a handful of villages in the north of the Rastan pocket after apparently the residents protested against the local gangs, who then left the villages.

Rusvesna: 'Syrian partisans attacked the US base in Raqqa' (report, leaflet, video)

1 Apr. al-Masdar: Douma surrenders after all.