31 Dec. According to Russian MoD, Russian Mi-24 crashed in Syria due to a technical problem on a flight to Hama, 2 pilots were killed, a technician survived.

According to Kommersant the Khemeymim airbase was hit with mortar fire which resulted in the destruction of at least four front-line Su-24 bombers, two Su-35S multipurpose fighter aircraft and one An-72 military transport aircraft. However, according to Al Masdar News the attack was intercepted and no damage (ACLOS page).

30 Dec. The SAA is steadily advancing against Nusra and has liberated dozens of villages in northern Hama since the start of the offensive.

According to a detailed ANHA News summary, in the year 2017 the Turkish army attacked targets in Afrin canton 576 times, killed and wounded dozens of civilians and uprooted over 10,000 olive and other trees.

29 Dec. The SAA reaches an agreement with the remaining ca. 300 Islamist fighters in the small Beit Jenn pocket in the western Ghouta. They take the proverbial bus ride to Idlib.

28 Dec. The giant al-Zara power plant in southern Hama close to the Rastan pocket goes out of service after a shelling attack.

27 Dec. "Pantsir" deflected a rocket attack on the Russian military base in Syria -report.

26 Dec. The SAA led by the Tiger forces starts their offensive against Nusra/HTS at the southern border of the Idlib pocket.

23 Dec. According to a YPG statement, in the month of November the SDF ranks were joined by over 300 defectors from the Turkish-backed Euphrates Shield and over 1,500 mostly Arab youths from the liberated areas.

According to the Russian Foreign Ministry, there are over 10,000 ISIS fighters in Afghanistan now, with more arriving every day from Syria and Iraq. The statement says that the US is informed but underestimates the threat.

22 Dec. In Astana, al-Jaafari demands the "immediate and unconditional withdrawal of foreign forces from Syrian territory".

21 Dec. Report +photo (robo-translation): terrorists shelled Aleppo during the procession of the "Immortal Regiment". 4 mortar shells were fired, presumably, handicraft production, 3 people were killed, including 2 children (girls 6 and 13 years) and a woman of 50 years, many were injured.

The Duma approves a proposal to turn the small Russian refueling port in Tartus into a complete naval base.

The eighth round of talks starts in Astana.

20 Dec. SAA General Suheil "the Tiger" al-Hassan arrives at the Idlib pocket frontlines where he is expected to lead a major upcoming battle against Al Nusra.

19 Dec. After an agreement with the government, the national flag is raised in the YPG-controlled Kurdish districts of Aleppo city.

18 Dec. In the eastern Ghouta pocket, the Army of Islam executes 45 fighters of the Al Nusra Front.

Assad receives an official and economic Russian delegation headed by Dmitry Rogozin and gives a press conference in the aftermath. Asked about French comments about the Geneva talks, he says that the country "has been the spearhead of supporting terrorism in Syria" and that "its hands are covered in blood".

17 Dec. French president Macron states that Assad will stay in power because he is protected "by those who won the war on the ground" and calls him "an enemy of the Syrian people".

Erdogan-loyalist Turkish paper Yeni Şafak claims that ISIS-leader Baghdadi and other top figures are alive and held at a US base in Rmeilan near Hasakah. (Peskov 'does not know what it is based on')

15 Dec. The "talks" in Geneva finally end without progress, which De Mistura and the French foreign ministry - to the accused's protest - blame on the Syrian government delegation.

Fehim Tastekin reports that at this week's meeting, Putin and Erdogan found a compromise concerning the participation of Syrian Kurds at the planned Syrian National Dialogue Congress in Sochi, with the latter accepting it as long as no official representatives of the PYD attend. A list of 140 delegates has already been provided to the Russians by the "Democratic Federation of Northern Syria" administration.

14 Dec. CNN: two F-22A 'intercept Russian jets over Syria, fire warning flares', 'Su-35 also flew across the river and was shadowed closely by one of the F-22As'; TASS: 'F-22 interfered with our Su-25 planes but departed when Su-35C approached'.

12 Dec. The Syrian delegation has returned to the still ongoing Geneva talks and holds new meetings with De Mistura, again in seperate rooms from the exile opposition and in face of the latter's preconditions they will never accept. This futility made them leave in the first place after the organizers announced that this kind of talks should go on for weeks. Meanwhile, the next round of talks in Astana is scheduled for December 21/22.

Remnants of ISIS start attacks from the desert pocket on the Euphrates east bank on the SAA on the west bank, with several success messages spread by their media outlets but unconfirmed by anybody else.

11 Dec. On his way from Sochi to Egypt, Putin makes a short surprise visit at Khmeimim airbase, meets Assad and orders the withdrawal of Russian troops from combat operations in Syria.

10 Dec. The series of assassinations of Nusra leaders continues with one in Deraa and one in Aleppo countryside. As usual, nobody claimed responsibility. 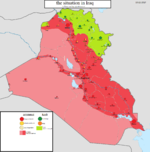 9 Dec. Iraq: PM Abadi declares that the army is in full control of the border with Syria and the war against ISIS has successfully ended.

7 Dec. The SDF releases a "clarification" saying that operation Al Jazeera Storm is still ongoing and about to be finished, likely countering rumours and an alleged document about a ceasefire deal between them and ISIS. They thank Russia for its actions which led to the "rapid collapse" of the terror group. A day earlier, South Front reported that the SDF released a statement denying that Russia's Airforce helped them advancing. Such a statement can't currently be found on the SDF press website.

The US defense ministry respectfully disagrees with the Russian proclamation of the end of ISIS in Syria.

6 Dec. The SAA declares that they have established full control over the west bank of the Euphrates. Putin states that he was briefed by Shoigu that the operations against ISIS on both sides of the Euphrates are finished and the group doesn't control any territory in Syria anymore.

Both Turkish and Kurdish media report that ISIS forces are retreating from Syria and Iraq to North Africa.

US: Trump recognizes Jerusalem as the capital of Israel.

5 Dec. Afrin canton is again under attack of the Turkish army and their proxies.

The Russians have supported the SDF advances on the Euphrates east bank with 672 combat flights (background).

4 Dec. Yemen: Days after former long-time president Ali Abdullah Saleh switched sides again and basically called for a surrender to Saudi Arabia, he dies at the hands of Houthi fighters.

After advances by the SAA, 13 km of the western bank of the Euphrates are still under ISIS control.

2 Dec. Resigned SDF spokesperson Talal Silo, who the SDF after his resignation said did so because his children in Turkey were threatened, gives an English-language interview to Turkish state-run Anadolu Agency. The following days a part 2 and part 3 are published.

Jihadists use of armed drones in this report +videos.

1 Dec. In Rojava, the elections for local councils and administrations are taking place. This is the second of three rounds of a bottom-up process of elections, after community co-chairs had been elected on September 22. The third round scheduled for early next year will elect a congress.