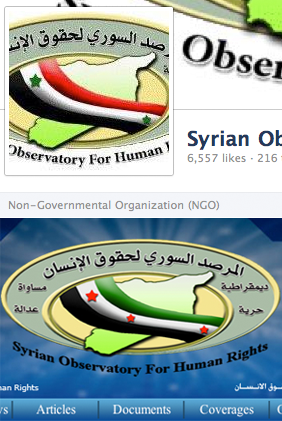 The Syrian Observatory for Human Rights (SOHR) is an outlet run by Ossama Suleiman (pseudonym Rami Abdulrahman) and his secretary out of Coventry, UK. They do, however, receive constant informational updates from a variety of activists in Syria, from rebel fighters to people willing to report the crimes of rebels. The SOHR displays the overall bias referring to the Syrian government as a "regime," giving credibility to reports that murky crimes were the work of the regime, instead of unclear, and only calling out rebels when the evidence of wrongdoing is bleedin' obvious. But they do it then, and sometimes quite well. They are (as of 2013) by far the most widely-cited opposition activist group, and are frequently cited and often criticized here as well.

The unusual level of relative balance they get from their variety of sources finds visual expression in the unusual mixing of iconography, using anti-government French colonial colors in some places (like their main website syriahr.org and Arabic Facebook page) while maintaining the national colors elsewhere (like on the Youtube channel and English Facebook page - see inset).