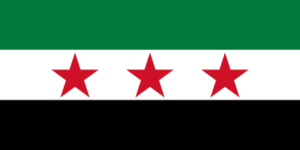 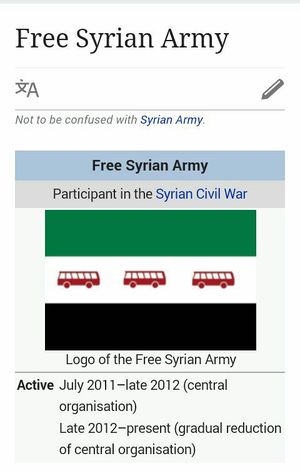 A well-researched March 16, 2013 article at Joshua Landis' Syria Comment blog argues that, essentially, "The Free Syrian Army doesn’t exist." [1] The original group and even its name and symbols have faded away under an array of various organization schemes that have largely fallen apart and given way to more overtly Islamist groupings like Jabhat Al-Nusra and Islamic State of Iraq and al-Sham. As the author, Aron Lund, pointed out:

Today, the FSA brand name remains in use within the Syrian opposition, but mostly as a term for the armed uprising in general. It’s quite similar to how a French person would have employed the term ”La Résistance” during WW2 – not in reference to a specific organization fighting against Hitler, but as an umbrella term for them all. With time, many people inside and outside Syria have started to use the FSA term to distinguish mainstream non-ideological or soft-Islamist groups from salafi factions. The salafis themselves used to be divided on the issue, but they aren’t anymore. The more ideological ones (like Jabhat el-nosra and Ahrar el-Sham) never used it, but at the start of the uprising, others did (like Liwa el-Islam and Suqour el-Sham). [1] 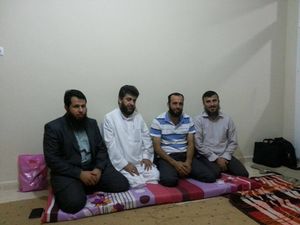 Joshua Landis has published a list of the most important rebel leaders as of October 2013.[2]

Groups aligned with the Islamic Front 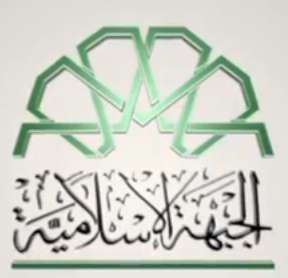 On November 22, 2013, in a statement[8] read by Suqour al-Sham's Ahmad Aisa Al-Shaykh, the formation of al-Jabha al-Islamiya (the Islamic Front) was announced, which merges all above listed important militant groups. Present were among others Abboud, who became the new "political commander", and Alloush who is the new "military commander" of the group presided by Al-Shaykh. With this move the different fractions of what was once called the FSA are maybe closest to the organized structure the FSA was described as in the early days of misreporting, although with explicit denunciation of the external "SNC" leadership and the artificial FSA command structure "SMC" led by Salem Idris, and with the explicit goal of forming an Islamic state under Sharia law. The original alleged head of the FSA, Riad Al-As'aad, was reported missing around the time of the group's formation.

Following the formation, an intense lobbying campaign by a Saudi-Israeli alliance started to sell this group as the new and last "moderate" hope to American policy makers, asking them to increase training and fund a support plan budgeted around 6 billion dollars.[9]

Apparently without success, because on December 11, 2013 the US and Britain announced that they were freezing non-lethal aid to the opposition indefinitely after the Islamic Front took control of several bases in northern Syria. The same day Salim Idris fled over Turkey to Qatar. Said an US official "I wouldn't say this is the end of the SMC and the end of Gen. Idris".[10]

During early 2014 with the rise of ISIS, important people in the Islamic Front made more moderate statements trying to distance themselves and winning central funding sources back, while continuing to fight alongside Al-Nusra Front.[4] 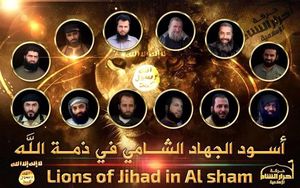 By Summer 2014, the Islamic Front remained the largest organized Syrian anti-government militia not part of ISIS. With the September 9 death of almost the entire leadership of Ahrar al-Sham, many of which had also important roles in the Islamic Front, it remains to be seen if this organization will continue to play its role as intermediary between hardcore Wahhabi and the few remaining "secular" FSA-type groups.[4]

After smaller groups joined in the following months, in late March 2015 it was announced that Ahrar al-Sham and Suqour al-Sham would join forces and merge into Harakat Ahrar al-Sham al-Islamiya under the leadership of Hashem al-Sheikh with Ahmad Aisa Al-Shaykh as deputy. This makes it the largest fraction inside Islamic Front with estimated 15-25,000 fighters, taking over from Alloush's Army of Islam.[11]

In September 2015, apparently pretty healthy, not least because they are what's left to be seriously called "moderate rebels" by Western media, Ahrar al-Sham elected as new head of the organization a certain Abu Yahia al-Hamawi, aka Mohannad al-Masri, a Syrian citizen born in 1981 originating from Idlib province, after the previous leader resigned.[12]

In an October 21, 2014, article with the ambitious title "The Moderate Rebels: A Complete and Growing List of Vetted Groups", Hasan Mustafa starts with the following before going into details of a rather long list of subgroups:

5th Corps: The 5th Corps is a recently declared formation consisting of five moderate rebel groups linked to the FSA’s Supreme Military Council (SMC) that have all adopted the revolutionary independence flag as their symbol. Led by a joint command council, it consists of the 13th Division, the 101st Division, Knights of Truth Brigade, Suqour Jabal al-Zawiya Brigade, and the 1st Brigades. All five have received TOWs provided by the international “Friends of Syria” alliance led by the U.S. through the Military Operations Command center in Reyhanli, Turkey. Active in northern Syria, the 5th Corps commands a few thousand men who fight against both the Syrian regime and ISIS.[17]

At a three day meeting in Turkey in late November, a new umbrella group named Revolutionary Command Council (RCC, majlis qiyadat al-thawra) was formed among 72 "rebel" groups, including most of the usual suspects. Apparently to the surprise of the organizers, "only 6 or 7" of the 17 seats in the council went to "moderate" groups with the rest going to the likes of Ahrar Al Sham. This happened while the not-invited Al Nusra Front again raided some of the "moderate" groups bases and captured an additional bunch of shiny U.S. weapons.[18][19] 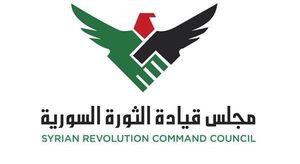 According to a Reuters article from December 2, the U.S. "vetted" militias Syrian Revolutionary Front and Harakat Hazm dropped out of the RCC after the conference because of the dominance of Islamists. According to the article, "there are at least two other projects underway, albeit at a nascent stage, to create a credible, unified military opposition that could be supported by foreign states."[20]

Despite the pull out, according to "rebel"/mercenary sources cited by McClatchy, the U.S. stopped paying salary to most fighters of the two groups a week later.[21]

In late December groups belonging to the RCC announced to have formed a joint command specifically for Aleppo, called al-Jabha al-Shamiya or the "Levant Front". It is headed by Liwa Al-Tawhid leader Adelaziz Salame. Aron Lund suspects that this was mainly done to be able to speak with one voice in the negotiations about a "freeze" the UN is trying to broker in face of the Syrian Arab Army coming close to finishing their encirclement of the militant-controlled eastern part of the city.[22]

Main article: US involvement in Syria

The delivery of the U.S.-made [anti-tank] TOW missiles to rebels in Aleppo and elsewhere in Syria appears to be an initial response to the new Russian-Iranian intervention.

According to its leader in an interview in June 2017, a bunch of initially 120 FSA fighters who fled ISIS to Jordan were trained by the US under the initial name "New Syrian Army", starting in May 2015. By the time of the interview they are a couple of hundreds and hang out with US troops at the al-Tanf border crossing, properly indoctrinated to prevent a "Shiite crescent" formed by both Syrian and Iraqi state forces opening the Damascus-Baghdad highway going through this place.[23]

Talks with (or in) Russia 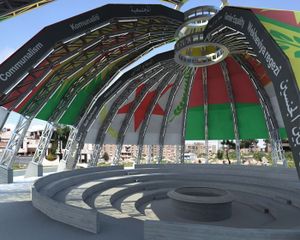 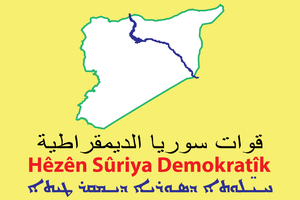 On October 15, 2015, the formation of a coalition of 13 armed groups under the name of "Syrian Democratic Forces" was announced. Beside several smaller Arab groups operating in the north-eastern parts of Syria, the by far largest group is the Kurdish YPG/YPJ. In their declaration they express intent to fight ISIS and thank the US-led coalition for their support which they hope will continue in the future.[24][25] Some suspect that the formation of this body of groups that had already worked together anyway is intended for plausible deniability of arming the YPG, which Turkey had warned in no uncertain terms both the US and Russia not to do.[26][27] In July 2017, US General Raymond Thomas revealed that this was indeed the case, that he told the YPG to "change their brand" to appease Turkey.[28]

On December 8, 2015, the SDF held a conference in Derik where the formation of a political body Democratic Syria Assembly (MSD) with 42 seats was announced.[29][30]

US special forces troops had to withdraw from the town of al-Rai on Syria’s border with Turkey, after allies from the Free Syrian Army (FSA) had driven them out, calling them “infidels” and “crusaders,” several media outlets have reported.

Lots of shouting on the video. Pickup trucks with mounted machine guns, US style uniform fighters, and a few Abrams tanks seen leaving, while the crowd chants something in Arabic, which includes 'America!'.

The self-proclaimed "Syrian Elite Forces" are an Arab tribal militia led by former Syrian National Council president and important Shammar tribe member Ahmad Jarba, and the military wing of his Syrian Tomorrow Party. Supported by Egypt and the United Arab Emirates, the militia initially fought only in Hasakah and Deir Ez-Zor provinces, but in December 2016 joined the US-supported SDF-led effort to conquer Raqqa from ISIS.[32] 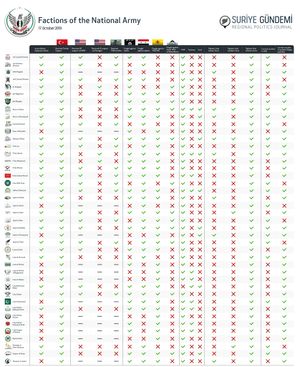 Many of the groups formed over the years in the several programs find themselves recycled as cannon fodder in the Turkish attack on the Kurdish Afrin canton in the very north-west of Syria. Erdogan threatens to widen this attack to the cantons in the east where the US supports the groups going under the label SDF. Firat News Agency breaks down "Erdogan's gangs" which include some who are allegedly still paid by the Pentagon.

October 2020. It is said that fighters from Syrian pro-Turkish Hamza division (Wikipedia; logo) or Sultan Murad division are fighting in Nagornyi Karabakh on Azerbaijani side.

Just hours before an explosion wiped out the entire leadership of one of the most powerful rebel groups in Syria, the head of Ahrar Al-Sham Brigade spent four hours talking to Yvonne Ridley about his vision for the future. In an amazingly frank interview, this is what he told her.