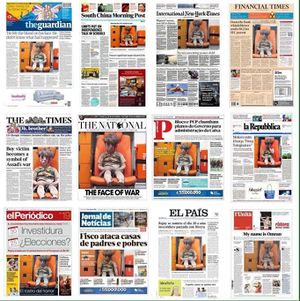 "The Western media is the best. It's free and therefore offers so much diversity." —@VeraVanHorne 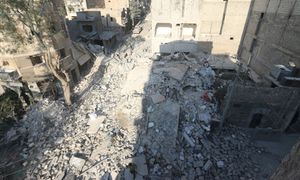 A general view shows the site of yesterday's airstrike where five-year-old Omran Daqneesh got injured in the rebel-held al-Qaterji neighbourhood of Aleppo, Syria August 18, 2016. The Daqneesh family lived in the building on the left. (source)

Location and building damage is uncertain based on the above footage.
Videos have marking AMC, which appears to be Aleppo Media Center, sponsored by Syrian Expatriates Organization, with contact address in Washington DC.

According to ABC, "Brother of Syrian Boy Who Became Face of Aleppo's Suffering Dies", Aug. 20, 2016.

The Return of Omran 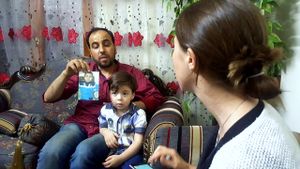 * Video: MSM Propaganda Turns Against Itself As Family Of "Boy In Ambulance" From Aleppo Tells Truth - South Front, June 5, 2017

On the evening of Aug. 17, 2016, an event that has yet to be adequately explained occurred in the Qaterji District of the Syrian city of Aleppo. Four-year-old Omran Daqneesh, as well as his siblings and parents, were injured in media alleged was an attack by the Russians – or the Syrian military, depending on what source one chose to believe. People in Aleppo suggested it could have been a strike by the US-led coalition. The reality is not yet known.

...Mr. Daqneesh denied any knowledge of a Russian or Syrian airstrike, saying that he had not heard any airplanes at the time.

“I was with my family in al-Qaterji neighborhood when our house damaged due to an explosion whose source we didn’t know, and although I was wounded I carried my child Omran who was unharmed and rushed out for fear of a new explosion, the father said.

He went on that a number of terrorists came and snatched Omran from his hands and put him inside an ambulance and took photos which they published later in a way that suits their propaganda and lies, confirming again that Omran has not injured and all the photos of him were staged by the terrorists.

“The terrorists asked me to accompany them outside the city to record false statements about what happened to my son in exchange for large sums of money, but I refused and stayed in Aleppo and didn’t submit to their demands despite the massive pressure and threats they used against me,” he confirmed.

Pulled from the rubble of a damaged building in Aleppo, Omran Daqneesh has moved the world. The heartbreaking image of little Omran sitting in an ambulance – stunned, his face caked in dust and blood, a Nickelodeon character on his t-shirt – has become a symbol of the Syrian civil war and the untold human suffering it has wrought

The Russian Defense Ministry said in a statement it never targets populated areas and that rebels themselves hit urban areas in order to derail humanitarian efforts there. The ministry also said the footage of the boy’s rescue showed windows in the house next door intact, indicating that the boy’s house was not targeted by an airstrike but was hit with a mine that rebels use.

better translation of the ending given by TASS: "(mortar) shell or a gas cylinder widely used by terrorists there".

This is not an icon. This is Omran Daqneesh. He is a Syrian boy. He is alive. (...) That gaze is the look of our damned eternity on this Earth.

The United Nations Security Council discussed the humanitarian situation in Syria on Monday, 22 Aug., 2016. The delegations of the United States, Britain and Ukraine blamed Russia for civilian deaths in Syria.

New York, SANA-Syria’s permanent envoy to the UN Bashar al-Jaafari said on Monday that the Syrian, Russian air force didn’t target al-Qaterji neighborhood in Aleppo and “you have to search about the real criminal.” Al-Jaafari said at a UN Security council session that the first and last responsible for the civilians’’ suffering in Syria are the governments that falsely claimed they are friends of the Syrians.

It was said that Omran Daqneesh incident occurred in al-Qaterji (map), e.g. The child has been identified as five-year-old Omran Daqneesh, who was injured late on Wednesday in a military strike on the rebel-held Qaterji neighbourhood, The Guardian, 18 Aug., 2016,

Regretfully, some UN Security Council members have been tactless and openly unscrupulous in discussing the situation in Syria. They try to push provocative insinuations about the Russian Aerospace Forces operations in Syria through the United Nations Security Council while being reticent about their own actions, which can hardly be called justified