On February 9th, 2014, the village of Maan in Hama province is overrun by forces identified by video evidence[1] as mostly Islamic Front, with flags and emblems of their subgroups Ahrar- and Suqour Al-Sham visible, in addition to Al-Qaeda affiliate Al Nusra Front. Government and associated sources speak of a massacre killing several dozens of civilians, while sources friendly to the aggressors initially speak about around two dozens deaths of pro-government militia men, but later acknowledge that a number of civilians were killed. Maan is close to the main highway connecting Aleppo with Damascus and was the site of a prior, and rather murky, massacre on Christmas Day, 2012. 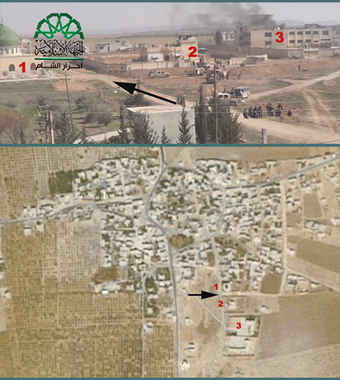 Ma'an (Arabic: معان - translates "gloss" or "glitter") is located here on Google maps, and on Wikimapia, 22 km north of Hama. It seems to be a small town of only a few thousand people, but not a village, set amid expansive fields. It's about three miles east of Morek, which straddles the main north-south highway connecting Damascus and Aleppo and thus is seen as important enough for rebels to attack over and over. Maan as well absorbs part of these frequent attacks. As reported, its people are mainly Alawi Muslim, the same religion as president Assad, although some reports and its moderate size suggest a mix, with a Sunni minority.

The 2014 incident features more video from the scene allowing a clearer verification. One useful video of February 9, stamped with the Islamic Front's logo, shows part of the town from a high vantage point. The scene of a mosque and two walled compounds and unique crossing roads, looking east, can be matched to the labeled spot in the south of town. There may be a slender tower visible about where the video is shot from (not labeled - a thin line pointing to about 4:15 on the clock).

On Februaryn 14, SyriaNews.cc published an apparently original interview with a man Firas, who says he lost several family members in the 2012 massacre and was injured in the new attack. But the details on this were given by another witness named Mohammed, who also served the interviewers tea. These two excerpts are provided:

First we heard ‘Allah Akbar’, they kept shouting it for an hour while we held hunting rifles, others held military ones. We took refuge in our homes. The shouting was accompanied with shelling. Our home was opposite to the eastern area, so we were hit with mortar shells, parts of the house collapsed and rubble came flying towards us.
...
Some of the attackers wore a costume similar to the Afghanis’, their dialect was not similar to the local one. They entered the house of my uncle, he was 80 years old, they climbed to the roof and used it to launch shells on the town.
My cousin hid his children & climbed the roof with a rifle, they killed him with his wife. They slaughtered them in front of their two children who later faced the same fate. [2]

This alleged witness was cited in a more obscure February 14 report from Aydinlik - a Turkish alternative source - titled "Massacre in Alevi Village, Syria" (Alevi is actually the Turkish sister community to the Alawi of Syria). Ali Haddur (which is more than likely the same name usually rendered Qaddour) says he lost "My four brothers, two sisters, mother and father" in the massacre, which he says he witnessed only telephone. His brief account:

"The last person I spoke to was my sister, this morning. The last thing she said to me was, ‘The door -’ and then the line was cut off. While I was trying to reach my sister, my friend had talked to my brother. The phrase, ‘Allah-hu-akbar (Allah is great), was continuously ringing through his ears from the village. I called my brother. Once again, some militant with a weapon answered. He had slashed them all to death. They were in no position to resist, due to their lack of weapons. Two are handicapped." [3]