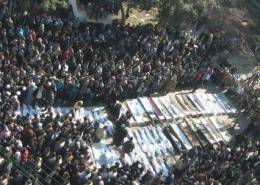 A small picture of massive protests, around a lot of coffins, after a huge massacre of immense mystery

On February 4, 2012 news broke of the Khalidiya Massacre - the worst yet among the Homs Massacres, or killings of civilians anywhere in Syria, to that date. Reports of "at least 416" and 200+ victims in the north-central Khalidiya distict of Homs city are matched by more credible and identity-based reports of at least 138 people there, of about 200 in all of Homs that day, later adjusted up to what seems around 163(tally in the works - see Death Toll on the talk page).

It was said the government forces killed them remotely, with artillery and mortar shells they poured down, destroying at least 36 homes, as the military had withdrawn from this area. The media and decision-makers of the West accepted and promoted this narrative of events. As often happens, the shocking new death toll was timed to coincide with a UN Security Council vote on regime change in Syria, and gave critics of Syria's government and its "crackdown on protests" new impetus. (See Timing on the talk page)

Pointing to the timing for partial motive, the government would claim those killed were actually locals taken hostage by the armed "terrorists," who had the general run of Homs after a Syrian military pull-out in December. In this version, rebels were re-branding victims of their own crimes to blame the government, and have it changed from without, in the manner of Libya.

This possibility will here be considered alongside the other narrative as we examine the evidence, first as usual on the talk page, with a few highlights summarized below.

Activists picked up the pieces and got their high body count, and reported their explanation to the world by the early hours of the 4th. Mainstream Western Media reported at the time, when it mattered, the version told to them, as here, by the Guardian's Damien Pearse (with agencies):

More than 200 people have been killed by Syrian forces in the city of Homs, according to activists, as the UN security council prepares to vote on a draft resolution backing an Arab call for President Bashar al-Assad to resign. ... the attacks prompted western and Arab countries to step up their push for a UN resolution calling for Assad to go. ... the French foreign minister, Alain Juppe, said the Homs bloodshed was a crime against humanity and "those who block the adoption of such a resolution are taking a grave historical responsibility".
...
Death tolls cited by activists and opposition groups ranged from 217 to 260, making the Homs attack the deadliest so far in Assad's crackdown on protests. [1]

As arguably the biggest atrocity to date, almost four months before the Houla Massacre provoked massive diplomatic warfare against Damascus, this February massacre sparked angry attacks on embassies, and also was exploited to influence a UN Security Council vote on Syria's future taking place that day. As Pearse's report noted, "It was not immediately clear what had prompted [or, rather, would prompt] Syrian forces to launch such an intense bombardment, just as diplomats at the security council were discussing the draft resolution supporting the Arab League demand for Assad to step aside." [1] Framed either way, that mystery of motive is worth pondering. 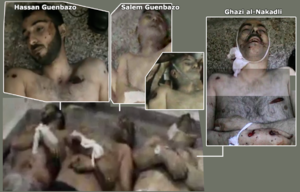 Three of the adult male victims seen on opposition video: as given, l-r: Hassan Guenbazo, Salem Guenbazo, Ghazi al-Nakadli. Strange shelling to injure each one's right shoulder, and stab one in the heart. Ghazi's young son, Mustafa, was next to him, mutilated more massively like a shelling victim (see here)

The numbers with some evidence behind them came from opposition Local Coordinating Committees and the Center for Documentation of Violations in Syria (CDV), is 181 victims in Homs at large, of which 138 were in Khalidiya. The last number was agreed at the time by the semi-credible SOHR, and even with a later adjustment upward, seems to reflect those killed strictly by distance shelling of some 36 homes. It's this smaller but still-large number that this page will deal with.

In all the reports from opposition sources heralding large quantities of dead civilians, it seems none mention one of the most striking qualities. According to the opposition's own VDC database, the early 138 shelling victims in Khalidiya include 8 boys (largely teenaged), 130 adult males, and no one else. The later additions included about 8 women and 4 girls, making the final tally about 90% adult male.(Strictly Male Victims? on the talk page). This has no explanation in the opposition's narrative of families hit randomly in their homes, but is consistent with the alternate story that rebels had used their own murdered captives - usually kept in gender segregation - as props. No pro-government sources seem to have noticed or reported this clue in support of their story, but it does exist and greatly strengthens that already-logical narrative.

Detailed video cataloguing and analysis has not yet been done, but all videos ACLOS has summarily reviewed seem consistent with these other findings. Only men or teenage boys seem to appear, all collected a little too quickly to believe they were pulled out from under rubble, and showing no dust or sign of rubble was ever on them. Many are totally intact and - visibly - could be simple gunshot victims. Other men do show extreme bodily injuries that could be caused by a number of things, including explosives shells through the roof, grenades through the window, or crowbars and heavy rocks. Deeper study may well yield more specific insights.

U.S. president Barack Obama declared emotively on the 4th "yesterday the Syrian government murdered hundreds of Syrian citizens, including women and children, in Homs through shelling and other indiscriminate violence." [2] But A closer look reveals the core bulk of the dead that proves "the Syrian government’s unspeakable assault" was 90% men, just barely "including women and children." And that clue suggests that hostage-taking foreign-sponsored insurgents, and a momentary lack of government checks on them in Homs, were to blame - as Obama used the fresh blood to encourage more restrictions yet on the government, and to add moral support at least for the rebel battalions of Homs.

Another crucial thing to consider is the exact nature of the rebel offensive of about the same time as this massacre. No one in Homs denies there was one; opposition sources told Al-Jazeera the FSA "attacked Syrian army checkpoints and killed about 10 soldiers," after which "it seems that Khaldiyeh has been under constant bombardment," presumably in revenge. [3] This ran from 8 PM and through the whole night, so their provocation must have been earlier on the 3rd. In contrast, SANA spoke to earnest-seeming locals who described sounds of shelling and rebels yelling and shooting in central Homs at unspecified but prolonged times during the night. [4]

The clash with soldiers al-Jazeera reported was supposed to show the Army was still there to fight, despite claiming to have pulled out. But by the opposition's own VDC records, the "army checkpoints" were actually the "Hasan police station" (2 killed) and an admistrative building - "Political Security Branch/Department in Homs" (8 killed) By martyrdom locations for the eight, that building was in the Bab Tadmur district of central Homs, which is right by the districts (al-Zahra and Muhijreen), where rebel attacks were reportedly heard that night. [4] The "soldiers," in the VDC records, are "policemen" ("personnel" or perhaps guards) and lower officers ("personnel" at the branch office). 1-3 security men were listed killed in less clear areas of Homs, for a total of 11-13, with no guarantee all of them were documented. That no soldiers are listed - to al-Jazeera's "about 10" - supports the claim that the army was withdrawn, leaving police as the city's main defenders, and rebel fighters as the most likely people to be using military grade weapons in functional units in Homs that night. (see talk page section for more detail and sources and reference map.)

These "regime casualties" are listed for February 4 - not February 3. That's not gospel, but it says they were all killed - fighting back, or executed later - after Midnight. By midnight, rebels say revenge shells had already been pounding nearby Khalidiya for hours, killing the 138 males someone had separated from their females. Considering all this, it seems fairly logical to wonder if the "regime shelling" and this rebel attack were the same thing. It seems to have been that way with the later record-breaker, the Houla Massacre, and that would have drawn on the lessons of incidents like this.

John Rosenthal, National Review Online cited an account from Mother Agnes published in French at the monastery's website (whole site dead now). The nun's credibility being what it is (mixed), she may have real details on this case (although she doesn't mention the apparent all-male aspect)

Already at the beginning of April, Mother Agnès-Mariam de la Croix of the St. James Monastery warned of rebel atrocities’ being repackaged in both Arab and Western media accounts as regime atrocities. She cited the case of a massacre in the Khalidiya neighborhood in Homs. According to an account published in French on the monastery’s website, rebels gathered Christian and Alawi hostages in a building in Khalidiya and blew up the building with dynamite. They then attributed the crime to the regular Syrian army. “Even though this act has been attributed to regular army forces . . . , the evidence and testimony are irrefutable: It was an operation undertaken by armed groups affiliated with the opposition,” Mother Agnès-Mariam wrote.

A number of family names that appear are shared by victims of surrounding incidents, where people of the same name were singled out for "Shabiha" massacres, targeted "shelling," or shooting by "regime sniper." There are clues in these connections ACLOS can so far make a little sense of, and hopefully more in time. See Family Names on the talk page for a beginning analysis of this aspect.