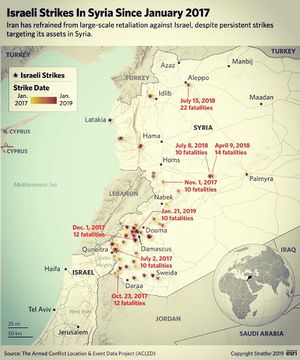 Video claims to be the moment when Israeli jet was hit by S200 air defense missile (denied). It is also claimed that a drone was downed, with some downed drone photos on social media.

The Syrian Army has warned of “dangerous consequences” following an air strike by Israel on a regime SA-5 antiaircraft battery east of Damascus, after it fired a surface-to-air missile at Israeli jets. Syria’s SANA state news agency reported that the Assad regime “warned of the dangerous repercussions of Israel’s repeated aggression attempts, stressing Syria’s determination to continue its war against the terrorist groups, Israel’s arm in the region.” According to SANA, the Syrian air defense “directly hit one of the jets, forcing the enemy to retreat,” contradicting Israeli military claims that all planes had returned safely from the operation. The SA-5 missile battery, which was stationed some 50 kilometers east of the Syrian capital, fired at the Israeli jets which were on a routine aerial reconnaissance flight in Lebanese airspace, IDF spokesman Brig.-Gen. Ronen Manelis stated. Israel believes that the Syrians fired at the Israeli jets at 10 a.m. Monday after thinking that they intended to attack. All Israeli aircraft returned safely to base and a few hours later responded by launching four missiles toward the same battery, destroying it.

Syrian state media: air defenses intercept some Israeli missiles aimed at an Iranian base in the Jamaraya region- JPost, 7 Feb. 2018 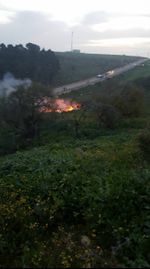 Israeli F16 'crashed' in Northern Israel, amid intensive Syrian anti-aircraft fire, with implication the F16 had been downed by it Sputnik reports. According to IDF spokesman report Israel had been targeting an Iranian drone control centre, and the downed F16 was involved, after an Iranian drone entered Israel from the Golan Heights.

Extended report by RT including details of response in Northern Israel where alarms were sounded and aerial explosions heard. RT reports an Iranian drone was shot down by an Israeli helicopter. In response Israeli F16s attacked 'Iranian targets' in Syria, the drone control centre/drone’s launch site at the Tiyas Military Airbase near Palmyra in a 'complicated surgical strike'. There have been earlier reports that Russia is flying small number of SU-25 planes from Tiyas airbase (also Russian commercial interests in the nearby area have been reported).

In a follow-up, Israel strikes more Syrian and Iranian targets in Syria: “Twelve targets, including three aerial defense batteries and four Iranian targets that are part of Iran’s military establishment in Syria were attacked.”

Haaretz: F16 PilotS were forced to eject. Israel operates a twin seat F-16D variant in addition to the normal single seat variants. Reports suggest that the plane was F16I "Soufa", which Israel has in a 2-seated option. The pilots are safe and were transferred to a hospital. One of the pilots is reported in 'serious' condition.

Videos of drone and command vehicle destruction have been posted by IDF.

Netanyahu shows a piece of Iranian drone in Munich, 18 Feb. 2018 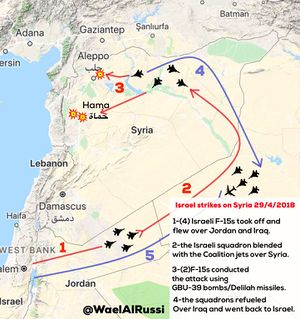 IDF retwitts a warning on (unspecified) 'irregular Iranian activity'. It is reported that in the evening Israel struck Iranian base near a settlement of al-Kisva 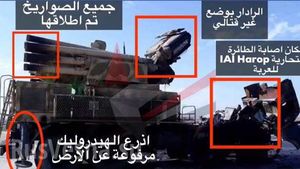 IDF: Iranian forces fired approximately 20 rockets, some of them were intercepted, no injuries were reported. Netanyahu is in Moscow for the V-day celebrations.

“In January 2017 we began attacking the infrastructure the Iranians were building in Syria.” “We began attacking systematically a number of times each week. Without making any statements. Beneath the radar.”

“We identified the Iranian strategy. They planned by the end of 2018 to have up to 100,000 Shi’ite fighters in Syria. They were bringing them in from Pakistan, Iraq and Afghanistan. They built intelligence bases on the Golan Heights [along Israel’s border] and simultaneously built wings at all the Syrian air force bases and brought in civilians to begin a process of indoctrination in schools and population centres.”

To avoid giving the Iranians a reason to retaliate, care was taken to avoid harming Iranian personnel, targeting only infrastructure. The general estimated that “only a few dozen Iranians were killed in the attacks”.

“We killed 10 Iranians — the most senior of them was a colonel [in the air wing of the Revolutionary Guards],” the general said. “Following this the Iranians decided to retaliate and attack northern Israel. We identified on May 8 serious preparations for a missile attack, led by Quds Force.”

Israeli operations prevented some of the missiles from being launched, and when the Iranians fired their remaining rockets the next night, most fell short of Israel’s borders. Four missiles that entered Israeli airspace were intercepted and destroyed. Israel then launched airstrikes against 80 Iranian targets in Syria.

Israel has declared that rather than taking sides in the Syrian civil war it is preventing the entrenchment of Iran across its border. Eisenkot acknowledged for the first time, however, that Israel had supplied rebel groups in the border area with light weapons “for self-defence”.