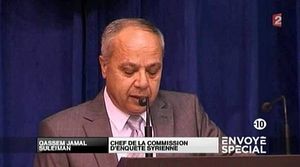 Following their visit to the scene in the days after the events, the UNSMIS observer mission under General Mood conducted an investigation. A report was given to UN headquarters but has never been released to the public. In a press conference on June 15, Mood gave the following remarks:

The statement we issued after el Houla is still valid. Which means we have been there with an investigating team. We have interviews, interviewed locals with one story, and we have interviewed locals that has another story. The circumstances leading up to el Houla and the detailed circumstances, the facts related to the incident itself, still remains unclear to us. We have put this together, the facts that we (can) could establish by what we saw on the ground. We have put together the statements, the witness interviews and we have sent that as a report to UN headquarters, New York. And then the assessment on what’s the way forward. Will there be a different investigation? (This-ed) is a matter for headquarters in this context. But if we are asked, obviously we are on the ground, and could help facilitate that.[2]

He offered the UNSMIS' help in facilitating more investigation. Instead, the Western powers of the UN Security Council blocked a renewal of the UNSMIS mandate at the next opportunity, July 20. With no mandate, UNSMIS had to leave Syria. This was perhaps part of the sanctions then being voted on to punish Syria for using heavy weapons and having troops in cities. However, as the Turkish Weekly put it, UNSMIS had already "suspended most of its monitoring activity on June 16 due to increased risk from rising violence." [3] That decision was made, by whomever, the day after Mood's Houla statement and offer of further help. As for Mood's report with "another story," it was essentially disappeared - acknowledged as existing but never shown to the UN Security Council as requested, never cited in related UN investigations, and of course never published to be listed below. [4] The replacement investigation done by the UN's New-York-based Commission of Inquiry would note in August, in apparent ignorance of Mood's two-stories report, "apart from the two witnesses in the Government report, no other account supported the Government’s version of events.” 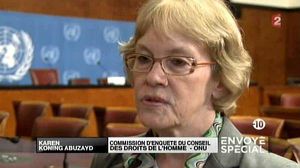 There were two reports reflecting different points in the UNHCR probe, conducted by its Commission of Inquiry (CoI). The first, released June 27, was an "Oral Update" of this investigation which remained undecided about the perpetrators. As Channel 4's Alex Thomson reported on its release, noting his own news team's on-site investigation was on par with the UN,'s so he understood how "investigators have found it (difficult) to produce concrete evidence of just who killed over 100 people."

In the end the report plays out two scenarios for the massacre, both of which it says are possible.
The first is that after a prolonged shelling barrage after Friday prayers that day, several hundred anti-government militia entered al-Houla probably from the east, from areas such as al-Rastan. They then used the shelling barrage in one area as cover to leave that area and attack and kill several families living to the south and southwest of the town.
The motive for that would be that these families were perceived as being pro-government and the militias wanted to escalate the conflict by blaming the atrocity on government forces.
The second scenario is that government forces of ‘shabbiha’ (pro-government militia) attacked and massacred the families after the shelling barrage. The investigators note that shelling followed by ground forces, snipers and shabbiha entering areas to search, arrest and kill civilians has been a proven and repeated pattern of this war. [5]

The UN report says anti-government civilians and fighters from al-Houla were first on the scene of the massacre and took care of body retrieval and burial. The report leads to two possible reasons for this: they were there anyhow because they’d committed the atrocity. Or they’d heard the shots and screams, knew what had gone on and naturally entered the location at the first safe opportunity. [5]

However the final report released six weeks later - without note-worthy additional research -, concluded that the Government/Shabiha were most likely responsible for the massacre in Houla. An on-ground investigation did not take place, despite the offer of UNSMIS to conduct it. From the final report:

The lack of access significantly hampered the commission’s ability to fulfill its mandate. Its access to Government officials and to members of the armed and security forces was negligible. Importantly, victims and witnesses inside the country could not be interviewed in person.

They used Skype and other modern technologies to interview witnesses in Syria, who were anti-government and consistent in blaming pro-government Shabiha. (August report, page 6). They acknowledge only two existing pro-government witnesses (page 11), and acknowledge they never talked to these. They say there was a belated effort from Syria to connect them on August 3, but they hadn't gotten on touch before the deadline for inclusion in their report. (page 64)

This site's Houla Massacre section and related, refined works, surely count as some kind of investigation with concrete, usually verifiable results more reliable than anything else prior. But then, that's a biassed inside view...

Besides what's recorded as-is on the various pages here at ACLOS, some external re-workings of the evidence