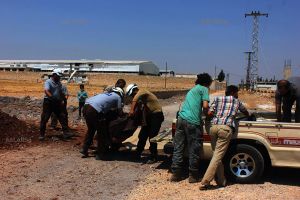 On August 12, 2016 missiles fired by a government warplanes allegedly killed 12 civilians including 5 children on a road in Hayan (حيان) town in Aleppo governorate. Video of the recovery of the bodies and the alleged rescue of a child by the White Helmets was widely distributed on social media.

There are about 20 actors altogether playing different roles typically seen in White Helmets hoax videos. The first video shows the White Helmets crew arriving at scene in a panic. A man carrying a baby runs aimlessly around in front of the camera. The second video shows a different white helmet crew at the site. The same cast is also seen in this photoset.

All the bodies seen are in an state of decay and must have been dead for probably a day or more when filmed, perhaps 2-3 days.

Incident area west of Hayan: About 2 km north of Anadan:

For Hayan, there are 3 unidentified boys, and 2 boys, 3 girls, 4 women, and no men at all of a Qraitem family. It seems the group was (allegedly) walking here with no men.

Arabic family name is قريطم - a search for that shows the most recent deaths before these were about 2 weeks earlier, 3 Qraitem men, all from the same town of Hayyan, died with no women or children killed. Ahmad Ali Qraitem, July 30 - Emad Mhmud Quraitem July 29 - Adel Mahmoud Rashoud Qraitem July 29. No others for a while before or after, until the 12th.

Four women might be 3 wives and a sister, second wife, adult daughter, etc. These might well be two portions of the same divided family. The men were singled out, here in turf managed by Al Qaeda (informally now), to be killed by government bombs. Then later, for some reason, the bombs ditched the chivalry or adherence to the fatwas, and went ahead and bombed their women and children as well, two weeks later.

Damn Assad and Putin and their family-dividing bombs, right? Where is the world? Why isn't all of Syria liberated to be run this way?