NEXTA founder/editor Roman Protasevich was arrested in Belarus after Ryanair plane Athens-Vilnius landed in Minsk after the captain was informed of a fake bomb threat issued in the name of Hamas. (RFE/RL version here). This seem to follow footsteps of Ukraine forcing return of Belavia plane on Oct. 22, 2016, to detain anti-Maidan blogger, citizen of Armenia (later released). It is also suggested (see eg here) that Russian PMC arrests in Belarus were originally planned in the form of forcing their flight from Minsk to land in Ukraine (this version was reported by Butusov of tsensor.net). 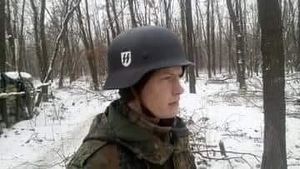 Roman Protasevich while serving with the Azov Battalion 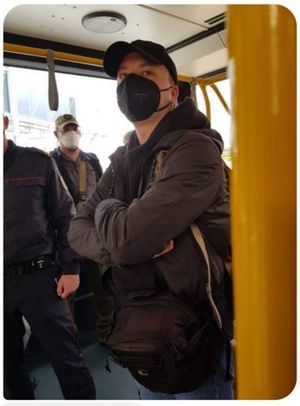 Roman Protasevich at the airport bus at Minsk airport. The photo was taken by an unknown person at 12:28 GMT, only 7 minutes before it was tweeted Franak Viačorka. This is the incident that was described by Protasevich and was first thought to have happened Athens. 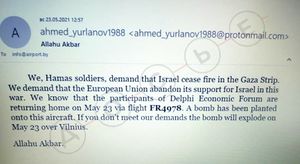 A fake screenshot of the hoax bomb threat from fake Hamas. (Source: Mikhail Khodorkovsky). Russian вс (воскресенье --Sunday) in the date, but English To in the address