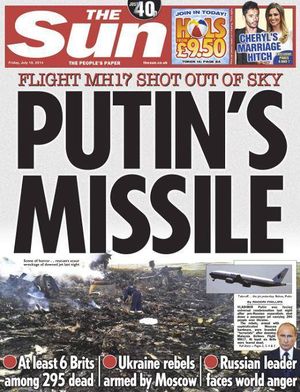 The stretch of the flight route of the Boeing 777 airliner of Malaysia Airlines and the site of its crash were within the zone of operation of two Ukrainian batteries of the S-200 long-range anti-aircraft missile system and three squadrons of the Buk-M1 medium-range anti-aircraft missile system, the press service of the Russian Defense Ministry told ITAR-TASS on Friday.

“Russian radio-technical facilities during July 17 were recording the work of the 9s18 Kupol radar station of the Buk-M1 squadron, stationed in the area of the Styla settlement (30 km south of Donetsk),” the ministry added.

The ministry stressed that technical features of the Buk-M1 air defense system allow it to exchange information between the squadrons of one battalion. “Thus, the launch of the missiles could also be made from all the squadrons, located in the Avdeyevka settlement (8 km north of Donetsk) or in Gruzsko-Zaryanskoye (25 km east of Donetsk),” Russian Defense Ministry stressed.

Another witness report appeared to be made by rebel leader Bezler, as reported in the SBU intercept posted on youtube and widely discussed. While the posted intercept appeared to consist from glued together independent bits, those individual bits appear to be not denied by the rebels as not being genuine. One bit, where "Bezler" heard saying to "X" that a plane was shot down at Chernukhino , appears to be a single bit which is disconnected from the other parts of the recording. Exact time of this part of intercepted statement cannot be verified from analysis of youtube video , but the video was posted and discussed shortly after the event.

“Regarding the debate which still exists over the sharing of information from the United States: all information which is available and which is of interest for the investigation has been shared,” said Fred Westerbeke, chief investigator in the criminal investigation.
He reiterated that they expected this summer to determine the exact location where the missile which downed the Boeing 777 was fired from and the precise model used.

21:03 report gives panoramic view of burning plane from a distance; no missile trails (or planes) can be seen in that footage.

(1) He posts a crash video, and claims that the rebels shot the plain using Buk provided by Putin.
(2) Refutes claims that Ukrainian Buk shot down Boeing. Makes a claim that: at 12:00 a Buk was seen in Torez, arriving from Shaktersk; an hour after that, rebels and equipment sign-posed "Vostok" were seen in Torez; and than one hour prior to the crash more arrived from Snezhnoe and they all departed to Shaktersk
(3) Posts photo claimed to show 'Buk trail' (the lots-of-sunlight-and-plume photo), which he says "was made several minutes after Buk launch, in the 3 microdistrict of Torez, 'from the West to the East, seen by thousands of people', and claims that " we determined that terrorists were in possession of "Buk" which was documented (зафиксирован) by us in the area of Torez and Snezhoe cities.
(4)Claims that 'one of the two Buks is located in center of Snezhnoe", while 'Putin calls Obama to report on information from Russian dispatchers
(5) Posts a photo showing "Buk in Torez"
Gerashenko is quoted in Odessa 1 TV footage at 21:00 Ukrainian time (22:00 Moscow time), blaming separatists. That is followed by a report on Ukrainian plane shot by a "Russian plane", pilot bailed out an was rescued; exact date/time/place of that event is not provided.
Russian Channel 1 TV corresponded in Kiev makes her report on the Buk claim, quoting Ukrainian TV channels, dated 17 July 2014, 23:30 (Moscow) according to the time shown on the web page.

Russian, Ukrainian, but no (official) US images

As part of their July 21 presentation of evidence, the Russian Ministry of Defense published satellite images allegedly showing Ukrainian BUK positions around Donetzk (RT report). On July 30, Vitalyi Naida, head of Ukrainian Security Service SBU’s counter-intelligence, came up with a series of slides (short article, announcement on SBU website with link to youtube-video showing the slides (presumably Ukrainian language)) allegedly showing that the Russian material was "faked". On August 1, the Russian Ministry of Defense published a rebuttal advising that

Instead of presenting hastily doctored evidence to the international community, the SBU could do with better control over all the mercenary units in the areas around Donetsk and Lugansk organized by Kolomoisky, Lyashko, Yarosh and others, who shell Ukrainian territory without any control from those in charge of the anti-terrorist operation.

As RT's August 1 article carries over, they made some very interesting allegations. Claiming prior alleged satellite image deception, weather mismatches, signs of alteration, and satellite positioning issues, the article says:

The images, which Kiev claims were taken by its satellites at the same time as those taken by Russian satellites, are neither Ukrainian nor authentic, according to Moscow's statement.
The Defense Ministry said the images were apparently made by an American KeyHole reconnaissance satellite, because the two Ukrainian satellites currently in orbit, Sich-1 and Sich-2, were not positioned over the part of Ukraine’s Donetsk Region shown in the pictures.

As explained here on the discussion page, this is a humorous way of pointing out Ukraine has no satellites, so this must have been provided by someone else.

... the real owners of those photos are hesitating to publish them under their own name, since it would derail the myth of the omniscience of their space reconnaissance,” the Russian ministry said.

It also simply might conflict with what the Ukrainians did with the images after they were released to them, but not to the global public. 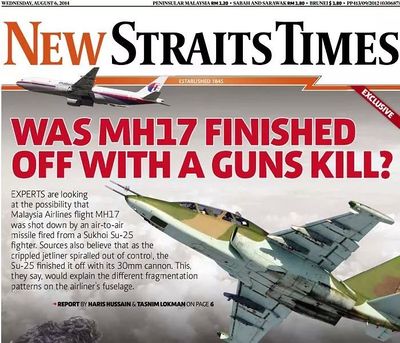 According to the document published by Max van der Werff (no.4), as of 21 September 2016 Dutch intelligence information was that there were no Buks within the range; with the closest ones being Ukrainian in Spartak/Opytnoe near Donetsk (behind crash area), and another Ukrainian in Lugansk (was that one functioning?); both were some 66/67 km away with the range being 42 km, according to the Dutch.

(Noted: we know nothing about the circumstances of how this document came to appear in the public domain; all claims belong to parties making those).

The mother of the victim named as "Olga L." was seeking $1 million in compensation from Kiev for manslaughter by negligence and had begun proceedings [at the European Court of Human Rights] in the past week, Bild am Sonntag newspaper said on Sunday.