Cookies help us deliver our services. By using our services, you agree to our use of cookies. More information
Help 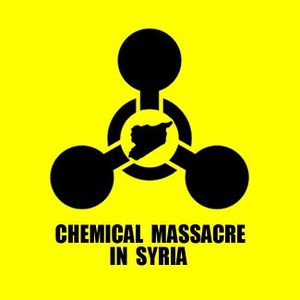 Logo used by activists in their August 21, 2013 Ghouta incident work

The use and alleged use of chemical weapons is an area of special interest at this site. Most media sources, in covering the pivotal March 19, 2013, alleged chemical weapons attacks, say there has been only one such allegation before that, not confirmed (Dec. 23). Although they're not fully filled-in, there are pages listed below for four prior allegations. Then there is March 19, with two or even three such incidents alleged across Syria on the same day, and one reported CW attack since then, so far. The previous four known reports show a tendency to cluster in time, but spread out in space, suggesting some strange coordination that the newer attacks remain fairly consistent with.

On August 20, 2012: U.S. President Obama publicly lays out his "red line." Alarmed at reports that Syria might be moving/readying its closely-watched chemical weapons stockpiles, he said that, regardless of what the UN Security Council said, if the Syrian government were to use these banned weapons against their people, there would be consequences that, implicitly, could be military.

It was not specified what would happen if the rebels crossed the line, in the regime's name, or otherwise. But that was clearly considered a pretty unlikely thing. The opposition would surely find other, more ethical, ways of securing the direct U.S./NATO intervention they so desperately need.

Almost to the hour one year after Obama's "red line" statement, a large alleged CW attack happened in the suburbs of Damascus which seemed about to trigger direct military action by the USA until Russia brokered a deal to destroy Syria's chemical weapons arsenal.

After Syria agreed to surrender its chemical weapons, CW allegations from 2014 and onward have by-and-large been of the government's use of chlorine gas, and with a non-acceptable opposition force in the field, charges against ISIS of using chlorine, mustard gas at least have also emerged. But other attacks by rebels go largely unreported, and careful study of the events suggests the ones people do talk about might also be rebel crimes, falsely blamed on "Assad."

An allegation of Sarin usage made the news big time in early April 2017 and led to the bombardment of an SyAAF airbase by then young president Trump.

All alleged crossings of that line in the Syrian war (that are known to us), in chronological order

(all pages are also listed below, but this list lets us add ones not analyzed, and to link to ones that are given only sections of a page)

That makes 18 attacks listed as of late June. By June 1, rebel doctor/activists had used total science to catalog 34 CW attacks, all by the regime, per an AFP report. "The attacks appeared mainly to be carried out by fighter jets, helicopters and long- and mid-range missiles. (...) 97 percent of victims were civilians, and the cases were mainly concentrated in the suburbs of Damascus." That does not tally with the case-by-case appearance of rebel fighters as more like 90% of seen victims than 3%, when there's a reported death toll at all. Perhaps they simply got the two category labels mixed up?

After June we lost track a bit until August 21.

Later attacks, mainly with chlorine, covered partly or should be covered here:

UOSSM, 2 days before the Hama incident, reported on the Kallaseh attack the previous day, December 9. This is the last of 8 incidents covered by Human Rights Watch in the span listed above.

Hoping this is the last sub-section and remains empty. ...

“Intelligence services of the city of Aleppo and Hama province reported about people, dressed in chemical protection suits, carrying bombs and various containers with unknown contents,” the source said.
Some groups of terrorists are mandatory supplying with gas masks in Aleppo, while before that they used gas masks extremely rare.

According to available information, the aim of the terrorists is conducting of simultaneous chemical attacks in the eastern districts of Aleppo and the northern areas of Hama in the coming days, supposedly, at night, in order to conceal the true source of chemical attack. After the attack, terrorists plan to use social networks and controlled media to blame the Syrian government in order to discredit it in the international arena and in the eyes of its own people.

This category has the following 8 subcategories, out of 8 total.

The following 62 pages are in this category, out of 62 total.

The following 87 files are in this category, out of 87 total.