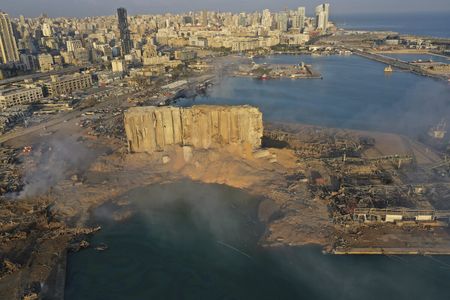 Literally thousands of people heard the first explosion, started to take videos of it with their smart phones, unbeknown to them that another huge one was to follow. 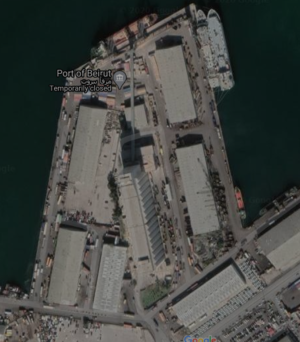 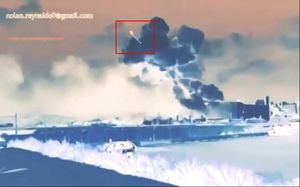 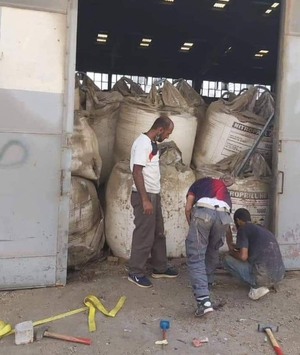 It's not certain the three detained workers are the same 3 seen in the famous photo, supplied perhaps first to BBC's Riam Dalati (inset). If so, why is their cameraman not also arrested? It's only possible that of all those present, they could look at and photograph this dangerous cargo without realizing what they were set to weld right next to. The product name might not be translated or recognized as a danger, but the universal signs for flammable and/or explosive seem to be plainly visible.

Furthermore, if these men were sent to weld, we don't see any tools for that, only ones that seem related to forcing entry to doors that are locked or, as said, not opening properly. The same kind of tools are seen used by firefighters trying to gain entry to warehouse 12's door number 11, apparently without success (see below). None of the six visible doors appears to have ever been opened, almost as if the doors had been welded shut from the inside. One door "did not close properly," and once that's fixed, none of them can be opened? 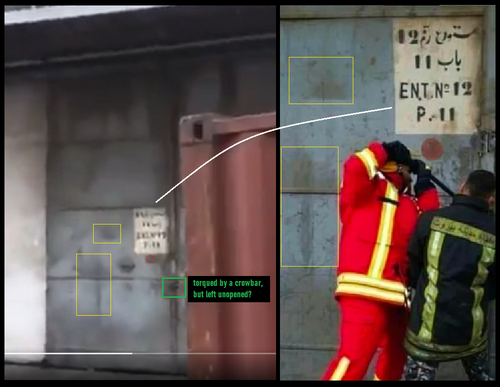 Most of the sealed doors seen in a photo and a video from the firefighters who died are different from the one in this photo, bearing white signs with the door number given, some warning signs, and no visible graffiti, while this one has just a blank white square instead of a sign. However door 7 isn't as clear in having a sign in that white square, and being less clear on that graffiti, just might be the door shown. Furthermore, these images are from the inner or west face of the building, and the door in the photo might be on the east or port side (also the more logical side to keep such off-loaded cargo that would hopefully be re-loaded and shipped away in time).

A video shows the earliest view of the fire is at the far north end of building 12 - so not likely connected to any hole way at its south end. An informed report in fact claims it started in a neighboring warehouse (Reuters: ""The source said a fire had started at port warehouse 9 on Tuesday and spread to warehouse 12, where the ammonium nitrate was stored." This should refer to the next building north, but on maps that's #11, with warehouse 9 not adjacent at all but on the other side of the grain silos (HRI). Just how the fire could spread south to warehouse 12 is not clear. From warehouse 12's north end, the fire visibly spreads to the south so the last videos show the fire centered north of the building's middle, around the second of six doors. It's here many flashing fireworks go off before and after a mid-sized explosion, and in the seconds before the final detonation, seemingly centered in the same basic area.

It's not clear what volume this cargo filled, be it the entire north half of the warehouse or just the middle, full width or just the eastern half or what. But perhaps the cargo extended far enough north of the apparent blast center that the door needing welded opened right onto some of the AN fairly near the north end. With enough fuel available, an fire they started there could burn in both directions, spark the fire seen to the north, and to the south burn mostly around the AN until some intermingled fireworks were ignited an hour later, finally setting it all off. The reports of the fire starting in another warehouse would have to be incorrect, but that's entirely possible.

Otherwise, the door shown may be nowhere near the fire's true origin, and the welding accident explanation it's linked to might be a false lead.

Another account: "A former port worker, Yusuf Shehadi, told the Guardian he had been instructed by the Lebanese military to house the chemicals in warehouse 12" and also says he saw the placement of seized fireworks there back in 2009-10 (years before to the AN shipment), and declared "that outrage rests with the government.” Shehadi may have had prior gripes, having emigrated to Canada since then, but he maintained close contact to the day of the blast. He also said "he had spoken to former colleagues at the port who said workers were attempting to fix a gate outside warehouse 12 with an electrical tool ahead of the blast." It should be noted gate and door are easily confused by the common Arabic word bab, so this may not be a conflict. But "electric toll" - while it could include some kind of electric welding torch - suggests the electricity is the issue, probably shorting out to spark the fire. So it's not clear if the story he gives matches the others we've heard, but it has the same basic time: “This was at 5pm, and after 30 minutes they saw smoke. Firefighters came, and so did state security. Everyone died.”" (The Guardian)

Another account yet: "On Wednesday, the Director General of Beirut Port Hassan Kraytem told local television channel OTV ... Maintenance was conducted on the warehouse door just hours before the blast on Tuesday, he added. "We were asked to fix a door of the warehouse by State Security and we did that at noon, but what occurred in the afternoon I have no idea," he said." (CNN)

"In a July 20, 2020, report to the president and prime minister — just two weeks prior to the explosion — Lebanese security services warned that there were serious security flaws at the facility that left the ammonium nitrate open to theft."

"One door of the unguarded warehouse was missing, while there was also a hole in the southern wall, the report said."

“In case of theft, the thief could turn these goods into explosives,” the report warned.

It's not clear how is under suspicion of wrongdoing and who's just being questioned for clues, but several people involved in managing the port and shipping the ammonium nitrate have been questioned or even put under house arrest.

"The Russian businessman whose explosives blew up Beirut’s port has been interviewed by police at his home in Cyprus - but is likely to avoid any charges."

"Igor Grechushkin was asked a ‘list of questions’ by Cypriot investigators in Limassol this afternoon on behalf of the Lebanese authorities, MailOnline can reveal. ... Grechushkin was not suspected of any wrongdoing," but the ship's captain Boris Prokoshev "said Igor Grechushkin, the owner of the vessel and the ammonium on board, had 'washed his hands' of the vessel, leaving the crew and cargo stranded for months."

"Director General of Lebanese Customs Badri Daher said the country's judiciary was told six times about the hazardous chemicals stored in a warehouse in the Lebanese capital. ... 'We requested that it be re-exported but that did not happen. We leave it to the experts and those concerned to determine why,' Daher said."

"Lebanon has since placed every official responsible for the security of Beirut's port for the last six years under house arrest."

"The public attorney in Lebanon, Ghassan El-Khoury, ordered the arrest of the Director General of Customs, Badri Daher, against the backdrop of the Beirut Port explosion, which killed dozens and injured thousands."

"While the number of people arrested exceeded 20 pending investigation, a judicial source revealed to Middle East "The list of arrests is likely to rise, and it will reach large heads that are in the circle of suspicion," he said. ... The sources said that among the detainees "the three Syrian workers who took over the process of welding (the warehouse door), so that they reported during their interrogation that they were assigned to this task and were not aware of at all the materials stored behind the door, they completed their mission and left the port about an hour before The explosion to show later that one of the sparks of the welding operation had been blown into the (warehouse) containing explosives, causing a fire that quickly led to more than one small explosion, as shown in the video footage of the first moments documenting the outbreak. "The level of negligence was so great in this file that the maintenance contractor was unaware of the assets inside the ward that was charged with maintaining his door, while the port administration should have informed him of the presence of highly flammable and explosive materials in the place in order to alert his workers to the need for caution," he said."

Marwa Osman: "Why would Hezbollah store such chemicals for 6 years in an area controlled by their political foes? I mean it is beyond clear. One can easily track the owners of this shipment that docked in Beirut and find the origin of these chemicals and where they were headed and then tie the pieces together to understand that the same old corrupt elite controlling this port since 1991 were behind this disaster. ... Like everything in Lebanon, jobs in the port were distributed on sectarian bases. Each warlord has his own set of names that gets pushed to be hired in any government position. The director of the port, the managers, all 4 former ministers of public works and transport since 2013 and the judges who were deliberately hiding the case to stop any prosecution, all had an idea of what was stored in port 12. None of them is even affiliated to Hezbollah. On the contrary they are all anti-Hezbollah." "Yesterday the current and former directors of the port were arrested for further investigations, I reckon we will have more information after two weeks concerning these questions."

"Riots have erupted again in the wake of the explosions. ... Saboteurs broke into the Lebanese Foreign Affairs Ministry and reportedly destroyed files and archives. Some commentators suggested that this may be a deliberate interference and obstruction of any investigation into those responsible for the Port explosion."

Nitric oxide is a colorless, flammable gas with a slight odor. Nitrogen dioxide is a deep red-orange gas that is poisonous but not flammable. It, along with aerosols, is responsible for the reddish-brown color of smog. At high concentrations it is highly toxic, and can cause serious lung damage. Nitrogen dioxide is a strong oxidizing agent, and is thus very reactive with other compounds.

More "potent" per weight then ammonium nitrate (or TNT). It needs oxygen for the reaction. So it's "fuel", while ammonium nitrate is an oxidizer. They together are more potent and volatile then separately. Either of them may give red nitrogen dioxide as a product. Probably more oxygen around in ammonium nitrate, and more nitrogen dioxide output. To compare how it looks like, one may look at hydrazine rocket launches and such fuel accidents ( possibly this but chemistry details unclear). There is probably no need for anything extra to see what we see. Hydrazine is highly toxic, and no particular quantity is claimed; it may be zero, in a commercial port, why would one keep there something so toxic and not needed there? Hezbollah (probably) denied, FWIW.

A video taken from the top of the grain silos next to the warehouse shows uncontrolled explosions of small fireworks within a port warehouse near to where the ammonium nitrate was stored. The small crackling fireworks explosions are followed by a very huge one.