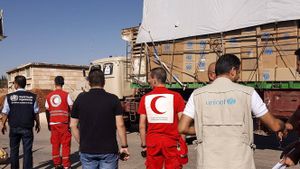 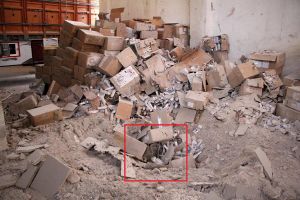 A tail section of a OFAB-250 bomb planted in the alleged SARC warehouse in an effort to blame Russia and Syria for the alleged airstrike. 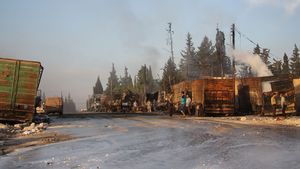 Destroyed trucks outside the alleged SARC compound (right, behind trees) 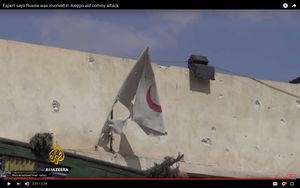 Was the Red Crescent flag in this spot at the time of the attack or was it placed there after the attack? Note the flimsy attachement. 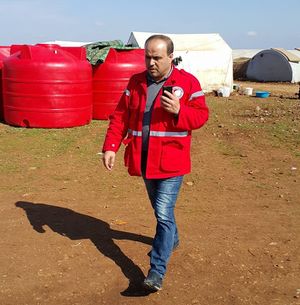 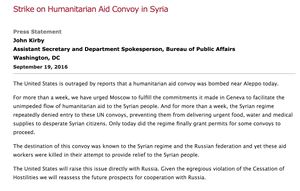 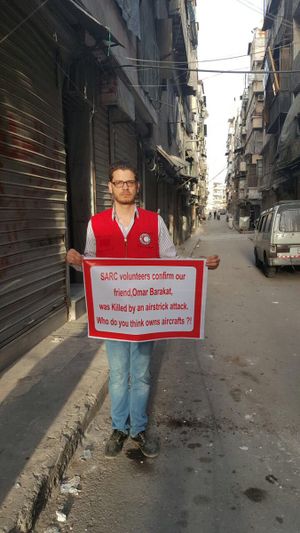 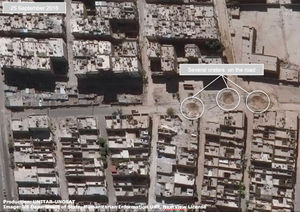 Photo used by BBC News article to promote claim of a airstrike on the convoy. See discussion

A Syrian Red Crescent aid convoy was attacked at a warehouse in Urm al-Kubra (أورم الكبرى - Big Orem‎‎, also transliterated Urum, Uram / Urem al-Kubra etc.) west of Aleppo on September 19, 2016. At least 18 out of 31 trucks were said to be destroyed with some 10-12 people reported killed - a number later raised to about 20, and then 31. The attack is said to have happened around 7:10-7:30 pm, right after the 7 day ceasefire ended at 7 pm and the Syrian and Russian air forces restarted airstrikes.

The United States and allies have placed the blame on a Russian or Syrian airstrike, and insisted Russia be held responsible either way. Russian and Syrian authorities have offered some alternative explanations that the convoy was attacked by armed groups on the ground, and/or by a 'predator' drone overhead at the time.

The convoy came from government controlled west Aleppo with government clearance and opposition acceptance. The convoy was monitored by a Russian reconnaissance drone with real time streaming on YouTube. It sat parked in Islamist-rebel-administered areas for about six hours or more before the attack. It's unknown whether any terrorist surveillance became aware of their presence.

The attack happened two days after the US airstrike on Syrian Arab Army in Deir ez-Zor, and just as the United States and Russia were set to coordinate their air offensives against Islamic State, as well now as against Jabhat al-Nusra, which will clearly be complicated now, at best.

1:19 shows irregularly shaped piece of metal taken from a hole in the ground, interpreted as a bomb (barrel bomb)
fires and smoke are seen, and some medicine on the ground. A burning truck (1:58), followed by undamaged truck with damaged tires
different story is presented, and S5 missile use alleged (how does he know, and why this is brought up now?)

Much of the media and its readers are mixing up the UN convoy that never entered Syria with this SARC convoy that came from west Aleppo. This false information is constantly repeated by Western media, even two weeks after the attack.

After last week's bombing of a U.N. aid convoy in Syria dealt a death blow to a ceasefire deal in which he had invested all his diplomatic capital with Russia ...(etc.)
"I listened to my colleague from Russia, and I sort of felt a little bit like they're sort of in a parallel universe here," said a visibly angry Kerry, effectively calling Lavrov a liar for blaming the United States for spoiling the ceasefire.

Also stated in Answers to questions from French journalists from TF1 TV channel, October 11, 2016 (we know for certain that the attack was delivered by a terrorist group) , with an additional detail
An exotic proposal has been made – I am going to surprise you and your audience. It has been proposed that our armed units, Russian military personnel, be deployed on the road to ensure transit safety. The Russian military, who are courageous and decisive people, have said they would do it. But I told them that this could only be done jointly with the US, and ordered them to make the proposal. We have proposed this, and they (the Americans) promptly refused.

Q (Sen. Lindsey Graham): Did Russia bomb the UN convoy? A (General Joseph Dunford): Senator, that has not been concluded, but my judgment would be that they did. They are certainly responsible.
Press leak about 'two SU 24 planes': evening of Sept. 21, 2016 (UTC), so prior to the above.

Denies that Syria or Russia are responsible. Does not know what happened. A detail not seen elsewhere: AP interviewer: There is footage of torn bodies...

“I will not speculate about [who perpetrated the attack]. It’s important to get the facts and to find out how this could happened, but I won’t speculate,” Stoltenberg said after a meeting with Lavrov.

Here in New York, we have learned about that for the first time from the US Secretary of State, who said in a private conversation, that according to 'their' (his/US) information, that two Russian planes for several minutes were somewhere in the area where the humanitarian convoy was, where it was hit. But, he said, do not worry, we will not announce publicly this fact, as we need to figure out what happened (надо разобраться). 'In a few minutes' as usual there were leaks from various news agencies in Washington, and next day, Secretary of State made this tragedy a central part of his dramatic presentation at UNSC ... We have said from the very beginning that it needs to be investigated (надо разобраться) . They first said it was an artillery strike, than helicopters, than planes. I am not a military expert, but I have read somewhere today that the strikes were delivered for 7 hours. But if Russian planes were somewhere in that area for several minutes, could the bombs be falling for several hours? I do not think so.

Samantha Power remarks. Quite a lot on White Helmets.
Russia and Assad are bombing the humanitarian convoys, hospitals, and first responders who are trying desperately to keep people alive.

Satellite photographs in the public domain leave no doubt that the convoy was struck from the air
Russian MoD asks Boris Johnson to show 'open access satellite photographs' to them too. Restates that there were no Russian planes in the area of the Red Crescent convoy. Russian military has objective control data, and knows 'the exact reason of loss of interest to this topic by our American colleagues'-TASS, October 12, 2016
RU MOD Facebook post (Russian)

America’s intrepid secretary of state has now taken the meaningless step of suspending talks with Russia over Syria. Meanwhile, Mr. Assad and Mr. Putin are creating military facts on the ground in Syria that will enable them to dictate the terms of a peace secured by carnage. They have decimated coalition-backed Syrian groups, slaughtered countless civilians, consolidated the Syrian regime’s hold on power, and even struck a United Nations humanitarian-aid convoy. And they have done all of this with no consequences. Thus the war grinds on.

There are some small craters, but nothing that looks like a 250kg bomb dropped from the air, nor is there any suggestion in the text that these small craters are evidence that the convoy was struck from the air. Pmr9 (talk) 22:31, 11 March 2017 (UTC) .

... of the DPA summary (Department of Political Affairs) of United Nations Headquarters Board of Inquiry into the attack, which heralds in a by-line "UN-Syrian Arab Red Crescent aid convoy attacked from the air." They believe it was an air attack, apparently without any ground attack aspect. From the evidence we see, this could be true, or untrue. But motive does not point to Russia or Syria. The summary at least does not address the issue of motive, giving it a very poor basis for deciding between various competing claims and conflicting evidence.

38. The Board further noted that no party had alleged the involvement of International Coalition Forces aircraft and, as such, their involvement was highly unlikely.

...met by masked armed men, who wanted to take some of the supplies on the convoy. A dispute then ensued between these men and the SARC Urem al-Kubra team. Following the dispute, three trucks were diverted by these armed men. One of these was fully offloaded, while the remaining two were partially offloaded. The three trucks were then allowed to proceed to the SARC compound in Urem al-Kubra. (point 21)

39. The Board stated that it had received reports that information existed to the effect that the SAAF was highly likely to have perpetrated the attack, and even that the attack was carried out by three Syrian Mi-17 model helicopters, followed by three unnamed fixed-wing aircraft, with a single Russian aircraft also suspected of being involved.

As of September 22, 2016 none of these scenarios has been ruled out.

Russia's Foreign Minister Sergei Lavrov told reporters the attack coincided with Al-Nusra and allies "on the Syrian government forces in the same area known as the Ramus road," Sputnik news reports, about 5-7 kilometers east from the site. Any connection is unclear but possibly of interest. (Attack on Humanitarian Convoy in Syria 'Provocation Aimed to Distract Attention' Sputnik News, September 23, 2016)

How Russia did it!

Initial reports had 12 killed (AFP/Arab News) (and 18 wounded?). Later, the Syrian Arab Red Crescent announced "Around twenty civilians and one SARC staff member were killed, as they were unloading trucks carrying vital humanitarian aid. Much of the aid was destroyed." (Syria: Attack on humanitarian convoy is an attack on humanity - SARC, September 20, 2016)

Other sources agree there was only one fatality among the Red Crescent workers, and it was their director, implying the rest survived. Some reports might give a larger number killed (8?).

Who provided the medical care for the wounded is not clear, but they seem to have a poor survival rate. At this time, it's nor clear if there was even one survivor. This is implied, however, in the Guardian.

Members of the Syrian Red Crescent, who had travelled from regime-held west Aleppo to make the delivery were too scared to share what they had seen, fearing punishment from Syrian officials. “They want to kill humanity, but humanity will not die,” said one of Barakat’s colleagues, insisting his name was not used. (Syria aid convoy attack: ‘the bombardment was continuous’ - Chulov and Shaheen, the Guardian, September 21, 2016)

The VDC lists only 11 victims - Mr. Barakat (SARC director) and 10 unidentified entries, listed as men from the town (given as Great Orme, or in Arabic غير معروف). This means they were given no real information. 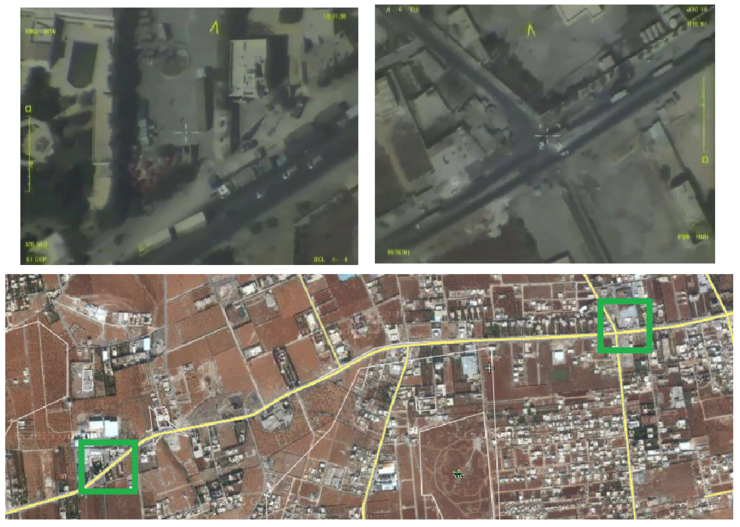 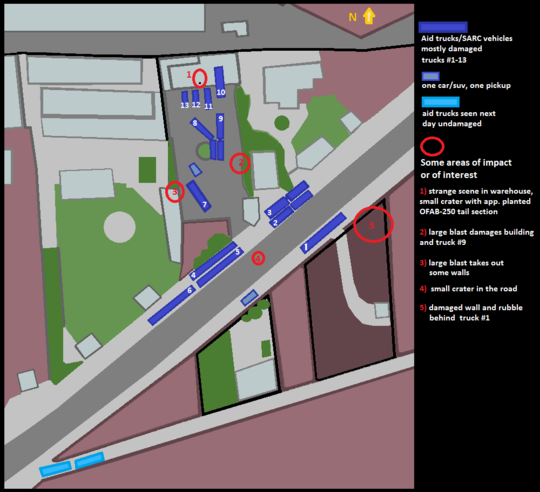 This is the same spot where at least some vehicles remained at the time of the attack, starting about 6 hours later. This graphic maps out roughly how many damaged vehicles there were the next day (13 trucks and/or trailers numbered) and where, and gives a start at mapping where apparent impacts happened (to be updated/improved). See talk page: scene analysis for more details.

Urm al-Kubra was previously the site of the infamous fake Aleppo "Playground Napalm Massacre" in August, 2013.

The area all around is reportedly under control of Harakat Noureddin al-Zenki, "moderate Islamists" who formerly received US military aid (they've since been cut-off). (Beeley) Al-Zenki was recently accused of launching a chemical weapons attack in Aleppo (August 2, ACLOS), and earlier had two top commanders openly partake in the abuse and beheading by knife of a captured boy (al-Zenki promised the killers were arrested, but they were seen out with guns two weeks later - again, see ACLOS).

The attack came within minutes of the ending of a 7-day cease-fire negotiated between the US and Russia, just as a Russia-US campaign agains both ISIS and Jabhat al-Nusra was to begin, and two days after the embarrassing 'error' by coalition forces in Deir ez Zor that killed dozens of Syrian soldiers. See talk page for more on this context.

There are two possibilities: Thanks to all this surveillance might, the U.S. and its Allies know who exactly who destroyed that convoy—Syrian or Russian, or both— and from what base. But for reasons yet to be revealed, they haven't disclosed it to the world. This could be to protect secret electronic surveillance methods, or to preserve the administration's thus-far ineffective diplomatic efforts. The second possibility is also alarming: Because of gaps in the surveillance net over Syria, the military doesn't know.