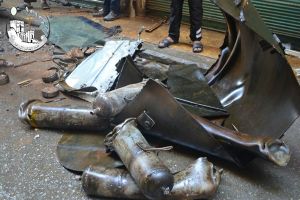 At mid-day on September 6, 2016, it was alleged the Syrian government again dropped a chlorine-dispersing barrel bomb on civilians, this time in Aleppo's rebel-held Sukkari neighborhood. Over 100 were said to be affected by the gas, with two people dying from it and/or injuries from impact.

Al-Sukari district is located in the south-west of Aleppo, bordering Ramouseh where the "rebel" corridor was closed (again) by the SAA on September 4th (on wikimapia). This makes it a proximate front-line area, where government offensives might be planned soon, for example.

The attacks also comes about one week after the UN-OPCW joint investigative mechanism released its interim report blaming Syrian forces for chlorine attacks by helicopter, back to 2014.

CNN cites an "Aleppo Media Center activist" to report "Wednesday's airstrikes struck the market, a mosque, a street and a roundabout in the rebel-occupied neighborhood. Yet another unnamed AMC activist "who attended the aftermath of the blast" said the chlorine was dropped around 1 p.m. local time, from a helicopter. This was "followed by four rockets fired by military jets, he said." [1]

The Syrian Network for Human Rights (SNHR) heard the attack was "around 1:30 PM," and the relevant barrel landed "near “Wafaa Kharsa” pharmacy in Al Sukkari neighborhood." [2] It was also apparently near a public market.

"When I arrived at the market, I started seeing the injured people and noticed that something was unusual," he said. "The injured did not have any signs of injuries or blood," he said, but instead were coughing loudly and had red, teary eyes. "From 300 meters from the center of the barrel bomb, I started smelling chlorine, and I realized it was a chlorine bomb," he said. [1]

Reports say at least 70 up to 100+ were affected. Differences might be from using a report from one hospital vs. multiple. CNN reports one unnamed hospital "claimed to have treated 71 people after the bombing - 37 of them were children." [1] SNHR heard "no less than 80 others were injured showing symptoms such as suffocation and shortness of breath." [2]

Most first day reports didn't mention any deaths, but reports of fresh airstrikes the next day, killing at least 10, had chance to mention two delayed fatalities.

CNN: "One person was killed by the blast of the barrel bomb, according to the US-based Syrian American Medical Society, which supports one of three hospitals in Aleppo where the victims were taken." [1] This should be, as UPI reported "One of the two dead, 13-year-old Hajer Kyali, had been in intensive care but died Wednesday afternoon. Officials said her house was directly hit by one of the barrel bombs." [3]

Mohammed Abu Jaafar, head of the local forensic department in the rebel-held part of Aleppo, said on Wednesday that the girl died overnight of suffocation and respiratory burns.

Mohammed Abu Rajab, a technician in an Aleppo medical center, says the teen was admitted to the intensive care unit following a suspected chlorine attack in the city's al-Sukkari neighborhood on Tuesday. He says she was suffering from the impact of the explosion, gas inhalation and burns. Her fascial bones were broken. [4]

Note: There are no "fascial bones." Fascia runs bodywide under the skin and has no bones. (Wikipedia). But there are facial bones. So to clarify, her breathing was complicated by a smashed face, caused by the physical barrel bomb impact/blast or after effects (or so it's being reported). But the actual chlorine killed her, realistically, as described. Clearly, video confirmation in this case would be unpleasant.

On the Ground News may have video: arriving at the clinic with an affected man, they record a girl of about 13 brought in - torn clothing, light dust, no sign of serious injury to the body. Her face seems intact but red and swollen on the right, near what seems to be a serious, but healed-over, wound in the cheekbone, and with blood and perhaps a serious injury under the chin into the left jaw and cheek area (brief view, injuries or chlorine indicators unclear - see Talk Page) [5] 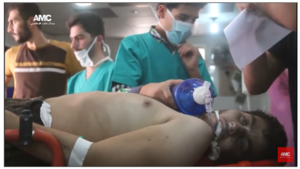 The AP dispatch mentions "A 29-year old man also died from respiratory failure." [4] British ITV news was told the male victim was Mohammad Abdulkareem Afefa, age 29. [6] SNHR: "We documented the killing of one individual, Mohammad AbdulKarim Afifa" [2] A man of perhaps this age, unresponsive and perhaps dead, appears in a video of he 6th (chlorine indicator on him seem absent - see Talk Page). [7] The same man is seen in an Aleepo Media Center photo (here on Facebook), clarifying he has white foam in his mouth and left nostril (still not very indicative of chlorine). 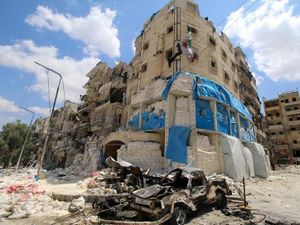 Al-Quds hospital in April 2016, after it was hit by airstrikes.

Many of the victims were treated at an "Al-Quds hospital." There are two "Al Quds/Al Quods" hospitals on wikimapia inside al-Sukkari district. Here is one Al Quds hospital (seen at right, MSF-supported opposition clinic allegedly "reduced to rubble in April, and there is the other one, about one kilometer south. An Al-Quds hospital was also issuing chlorine attack claims on August 11. (See also Al-Quds Hospital, Aleppo)

(There's also a September 7 attack, and rather deadly)