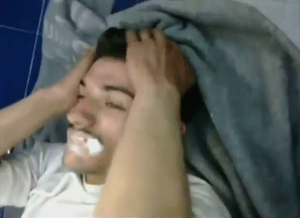 Alleged victim, unable to wipe his mouth clean, perhaps exasperated at how stupid this video is

What would be the first confirmed chemical weapons attack of the Syrian conflict (if confirmed, and it's not the first allegation) was reported on April 13, 2013, in the recently "liberated" Sheikh Maqsoud district of Aleppo. The initial death toll was three, later updated to four - two infants aged one and two years old, and two women (originally one). 16 others were reportedly effected by the unspecified poison gas. Later and more quietly, records show 14 deaths (see talk page).

Activists say the poison was dispersed with a certain type of plastic grenade, which was dropped from a Syrian military helicopter. The same grenade would be used in the Saraqeb incident a couple of weeks later, and otherwise would be seen only in the hands of Jabhat al-Nusra.

This page is a stub, with details worked out on the talk page. Below are some major points, summarized.

The case is illustrated by two known opposition videos of effected victims. All experts agree the signs they exhibit (white foam like whipped cream around the mouth/nose, mild persistent wiggling, inability to ad-lib very convincingly - see inset) are not effects of sarin or CW exposure. Most experts agree one of the scenes look faked, and the other one is worse (see here and here).

The incident has gained significance since the June announcement that the United States (president Obama, his intel people) are certain the Syrian government has used sarin nerve gas, crossing the "red line" and necessitating some U.S. intervention. This was specifically the case, they said, in two incidents in Aleppo, this one and the first reported one in nearby Khan al-Assal on March 19. That hit a loyalist area and killed mostly soldiers, either on accident or to frame the rebels, rebels and Western governments speculated. But now it's said the government did both, and both involved "small amounts" of sarin gas, which both sides have been reported to possess (see here).

Before that, this attack was linked to a later "CW" attack in Idlib by a plastic gas grenade seen at both scenes, fingered by activists as the vehicle for the gas, and unidentifiable to all weapons experts so far. Brown Moses made that link and then, with the help of a photographer who'd been to northern Syria, linked it to Jabhat Al-Nusra, the only people yet seen in possession of one of those grenades. (see here for links and discussion). Thus it seems Al-Qaeda in Syria has finally earned itself direct U.S. military support, in part with this alleged April 13 CW attack.